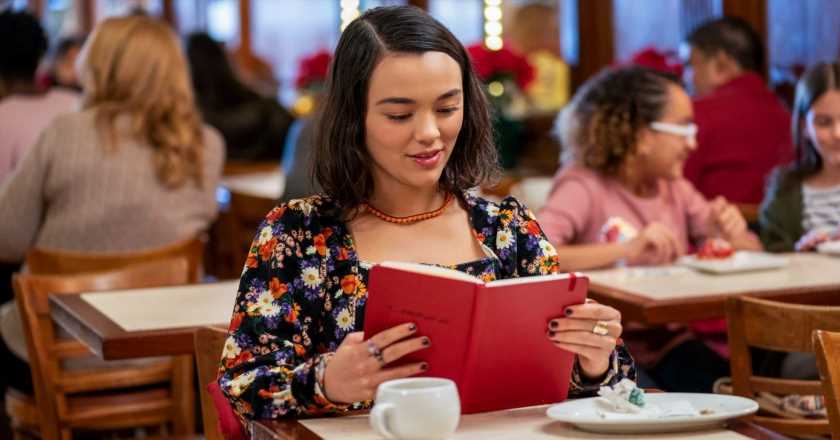 From Home For Christmas to The Santa Clauses, these festive TV series are sure to add some sparkle to the long dark nights…

Christmas movies are brilliant; absolutely nobody is denying this. A festive film, though, is over so quickly, whereas a Christmas TV series (yes, it’s a thing) will last for so much longer. Which means, yes, you can stretch those feel-good vibes out for as long as you’d like… or overload your system with the warm ’n’ fuzzies during a weekend bingeing session.

To help you achieve a state of pure Christmassy bliss, then, we’ve sourced the very best Christmas TV shows that are available to stream across Netflix, Apple TV+, All 4, Amazon Prime Video, BBC iPlayer, and Disney+ this winter.

You are very welcome.

Transforming the classic Christmas romcom into an utterly addictive TV series, this Netflix Original sees cynical Dash (Austin Abrams) and optimistic Lily (Midori Francis) trade dares, dreams and desires in the notebook they pass back and forth at locations all across New York City.

Love Actually quiz: which character are you most like?

Over time, the chalk ’n’ cheese pair find they have more in common with each other than they would have expected. And, as their penpal relationship becomes something deeper, our eponymous heroes start wondering if they should meet up IRL to see if the spark burns even brighter.

Dash & Lily is available to stream on Netflix now.

Fans of The Santa Clause movies know the drill with this one; Tim Allen’s Scott Calvin is about to turn 65, and he’s realised that he can’t be Santa forever. Cue him setting out to find a suitable replacement, all while preparing his family for a new adventure in a life south of the pole…

The Santa Clauses is streaming on Disney+.

You can now celebrate the merriest time of the year in true Peanuts style, as Apple TV+ is bringing us a collection of Christmastime tales from the original comic strips. Expect to spend some quality time with Snoopy, Charlie Brown, Linus, Lucy and Sally.

Home For Christmas boasts a 91% ‘fresh’ rating on Rotten Tomatoes.

Fancy diving into one of the very best shows on Netflix? You’re in luck, because Norwegian comedy series Home For Christmas is positively made for this time of year!

Serving up big Bridget Jones vibes and then some, the story is simple: Johanne (Ida Elise Broch) is a thirty-something nurse, and she’s sick of being the only single one at Christmas.

Tune in to watch her scrambling to find a boyfriend to bring home for 24 December – with surprising results.

Home For Christmas is available to stream on Netflix.

Yet another festive Netflix series, this underrated gem sees down-and-out musician Bastian (Luke Mockridge) travel home for Christmas, only to learn his brother is now dating his ex.

Over Christmas is available to stream on Netflix.

This incredibly watchable Marvel series sees Clint Barton (Jeremy Renner) and Kate Bishop (Hailee Steinfeld) – both of whom lay claim to the Hawkeye name in the comics – join forces over the Christmas holidays to shoot a few arrows and try to avoid becoming the target themselves.

Throw in a wildly entertaining performance from co-star Florence Pugh, and you have a recipe for an action-packed Christmas adventure.

Hawkeye is available to stream on Disney+.

In this heartwarming documentary series, Simon Callow journeys to the Austrian village of Oberndorf and the city of Salzburg in a bid to uncover the moving origins of the world’s most popular carol.

The First Silent Night is available to stream on Amazon Prime Video.

The Greatest Snowman is available to stream on All 4.

Created by and starring Rose Matafeo, Starstruck sees millennial Jessie enjoy a festive fling, only for things to get incredibly awkward when she discovers her hook-up is a film star. As if life isn’t complicated enough. Can they stumble through and make it work?

Starstruck is available to stream on BBC iPlayer.

Destinies collide when an extreme storm traps travellers and workers at Oslo airport, forcing them to spend the final hours leading up to Christmas together.

Julestorm is available to stream on Netflix.

Christmas Flow is available to stream on Netflix.