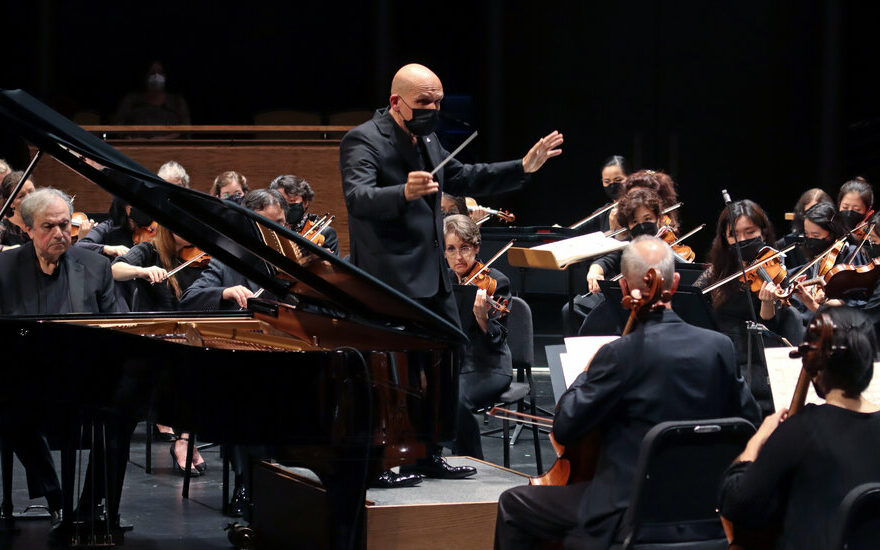 Maybe it was the surge of adrenaline that the New York Philharmonic felt at finally returning to live concerts at Lincoln Center after a year and a half. Maybe sizing down symphonic power for a temporary venue — Alice Tully Hall, with just over a third of the seats of the orchestra’s usual theater across the street — was a work in progress on opening night.

Whatever the reason, the Philharmonic’s clenched, loud performance of Beethoven’s Piano Concerto No. 4 last week left me jangled and headachy. From my seat close to the action — maybe that was part of the problem, too — the performance seemed in line with the worst impulses of Jaap van Zweden, the orchestra’s music director, who announced just before the season that he would leave his post in 2024.

That bullied, blatant Beethoven swept up even a normally suave soloist, Daniil Trifonov, who huffed and pounded. It didn’t bode well for the remainder of this season, much of which will be held at Tully as the Philharmonic’s home, David Geffen Hall, undergoes renovations.

Not so fast. On Thursday — the orchestra’s nerves perhaps settled, and now at the Rose Theater at Jazz at Lincoln Center, another temporary home much smaller than Geffen, but airier in feel than Tully — a different Beethoven piano concerto, the Third, was superb.

Yes, I know: Another week, another Beethoven concerto. But it’s slightly easier to forgive unimaginative programming when the performance is as spirited and full-bodied as it was with Yefim Bronfman as soloist.

Beloved by this orchestra, particularly in this composer, Bronfman built imperceptibly through the first movement to organ-like grandeur in his cadenza. Then his tone receded into pearly dreaminess before ending in a shivery trill. His serene poise at the start of the Largo (later recalled in his encore, Chopin’s Nocturne No. 8 in D flat) was matched by silky strings. The Rondo finale had dash all around, but Bronfman never seemed to be putting phrases in italics or boldface; this was easygoing playing, in the best sense.

The concerto followed Hannah Kendall’s “Kanashibari” (2013), which has a few ethereal moments before falling into a long stretch of John Adams-esque chugging strings and brassy fanfares, with the odd slap of wood. But the orchestra played it with focus and polish.

Opening with a contemporary work of seven or eight minutes that’s swamped by the subsequent hour of Beethoven and Haydn, the program was in the classic mode of an ensemble that’s profoundly cautious yet wants to appear progressive.

A slight complication is that while Beethoven’s Third Piano Concerto is frequent fodder for the Philharmonic, Haydn’s Symphony No. 92 in G (“Oxford”) isn’t. It’s standard repertory, sure, but not for this orchestra, which until trying it out this summer hadn’t played it in almost 20 years.

It made you, as performances of his symphonies often do, want to hear them all the time. Particularly when they gleam like the “Oxford” did on Thursday, the phrases at the start sculpted but not overly managed. Perhaps, going for crispness, van Zweden occasionally erred on the side of curtness, and the final movement sometimes tipped into feeling more driven than witty. But the playing was largely rich and good-humored: balanced and gentle in the second movement, then graceful and patient, and with even a hint of mystery, in the third.

Based on first impressions, it seems that, of the Philharmonic’s two main residences this season, the intimate yet spacious Rose Theater might give the orchestra and its sound more room to breathe.

Program repeats Friday and Saturday at the Rose Theater at Jazz at Lincoln Center, Manhattan; nyphil.org.