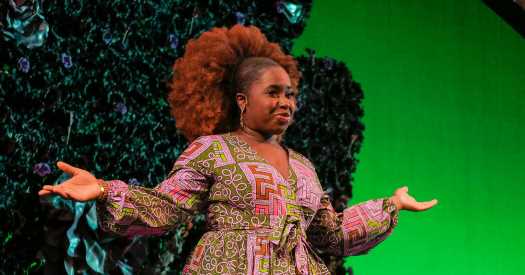 I have 4b hair that remained virgin hair, mostly styled in box braids and cornrows with extensions, until I was 13, when I got my first relaxer. My scalp has known chemical burns, hot comb burns, curling iron burns, flat iron burns and the unrelenting throbbing that comes with hours of tight root-wrenching braiding. I got my big chop at 21 and have been natural — years of T.W.A.s and twist-outs and wash ‘n’ go’s — ever since.

Do you get what I’m saying, or am I speaking another language?

I’ve written about my hair before, and every time I do I’m well aware of the vocabulary, which I’m sure is unfamiliar to many non-Black readers. Though it’s not just a matter of terms or phrases: Black women often encounter unprovoked opinions and wrong assumptions from employers, strangers — even family and friends — about what their hairstyle says about their professionalism, their social status or their relationship to Blackness.

The personal, cultural and political implications of Black hair are at the root of the well-meaning but less than inspired “The Glorious World of Crowns, Kinks and Curls.” (And yes, pun definitely intended.)

Written by Keli Goff and produced by and filmed at Baltimore Center Stage, “Crowns, Kinks and Curls” is a series of vignettes, each one featuring a Black woman recounting how her hair affected her school life, relationships or career. The piece channels the spirit of Ntozake Shange’s “For Colored Girls,” though the writing, albeit earnest, is far less poetic.

The actresses Stori Ayers, Awa Sal Secka and Shayna Small embody all of the fictional women, donning different do’s to do so. (Nikiya Mathis handled the eclectic mix of hair and wig designs.) Most of the scenes are monologues, though occasionally two or three women meet, say, in the office of a mostly white law firm, where an older straight-haired lawyer named Sharon (Ayers) berates a younger one, Ally (Sal Secka), for wearing her hair in braids: “I’m sorry, I can’t let you meet a major client looking like this.”

Gaby (Small), with sleek face-hugging Josephine Baker-style finger waves, recalls her mother’s distress that she cut her “good hair” for her wedding day, showing how hair reflects the generational trauma held by some Black women. Wanda (Ayers), in bouncy mocha and champagne blonde curls, recounts how an ex-boyfriend reproached her for pressing her natural hair for an interview, illustrating how “authentic Blackness” is often policed even within the Black community.

And so every tale has its moral, none of which should be new to any Black woman. They certainly weren’t for me, a woman who has had white people make awkward comments about my hair, ask questions and even ask to touch my crown in admiration.

Which is to say “Crowns, Kinks and Curls” excited me more conceptually than it did in its actual execution, which was all perfectly serviceable, from the performances to Bianca LaVerne Jones’s staging, to Dede Ayite’s set, with a big, puzzling backdrop of large flowers.

Scenes span recent history, some taking place during the Obama Administration and others referencing former President Trump and 2019’s Crown Act against hair-based discrimination. These glimmers of vibrancy underscore the timeliness of the topic, given how the social consciousness of Blackness has shifted since the Obama era.

In one humorous monologue, Sal Secka, wearing an Afro pony — ethereal and exquisitely cloudlike — plays a woman named Adaora who has accompanied her biracial daughter to see the royal wedding of Prince Harry and Meghan Markle and cheer on the Black princess.

In a somber scene, two unnamed women (Sal Secka and Ayers) unwrap and unpin their hair in silence, as “Strange Fruit” is sung offstage; they are preparing to go to a funeral for a Black husband and son unjustly killed. It’s the one sequence in which hair is not so explicitly the topic of discussion, but rather is powerfully positioned as part of a larger expression of the Black experience, particularly at this moment in history. 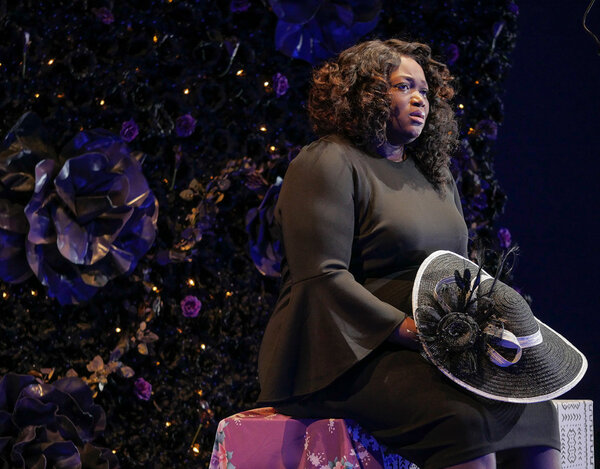 The show’s program includes a brief timeline of the history of Black women’s hairstyles and hair practices, referencing enslaved women’s use of head wraps and braids before enduring the Middle Passage, along with the work of hair pioneers like Madam C.J. Walker and George E. Johnson Sr. There’s so much to be mined in the history of Black hair that “Crowns, Kinks and Curls” feels like it has missed opportunities to go further — or even incorporate real stories.

Why not use the smart, funny and vulnerable voices of real Black women? Why not devise scenes that are more than neatly prepared monologues?

And because it is a rarity to see Black women talking about their Black hair onstage, what I saw only made me hungry for more: I wanted to see more Black women of different shades, in not only wigs and weaves but also their own natural ‘fros. I was disappointed, in scenes where women were supposed to be wearing natural hair, to see false approximations.

I believe this very capable show — which had a creative team entirely comprising Black women, to my utter delight — can be more. I hope it happens if and when it’s staged in person, as it’s the kind of work I both want and need to see, as a Black female critic and as a Black woman writing about an art form that too often fails people of color.

So as I undid my own head of flat twists this weekend in preparation for a much-needed trip to the salon, this earnest request crossed my mind: more Black women, and more (and more and more) of those curls.

The Glorious World of Crowns, Kinks and Curls
Through April 18; centerstage.org