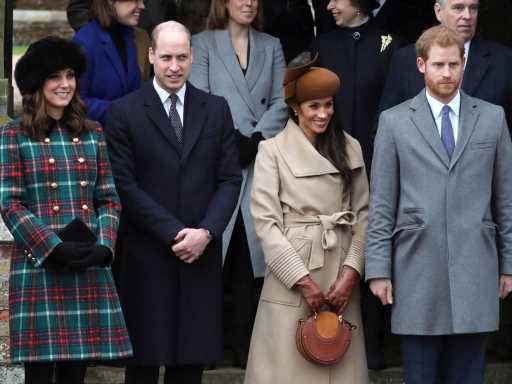 It’s no secret that Prince William and Prince Harry’s relationship has grown rigid over the course of the past few years. And while the brothers might slowly be mending their bond away from the scrutiny of cameras, their central conflict of how to support one another while paving their own paths remains. The two brothers have endured immense pressure throughout their lives with regard to their roles within the monarchy, and Christopher Andersen’s royal tell-all Brothers and Wives details how those external pressures eventually fed a rift between the brothers. A new anecdote from the book about Harry showing William a popularity poll about the brothers and their respective wives, Meghan Markle and Kate Middleton, could add another layer of understanding to the pressures the princes are facing, and why the brothers have made the choices they have in recent years.

According to  Brothers and Wives, Harry once showed William a popularity poll that illustrated how the Duke and Duchess of Sussex accounted for “80 percent of new online interest in the monarchy” sometime in 2019. Andersen further elucidates that Harry showed William the poll as a piece of evidence for why the Sussexes should be allowed to “proceed with some of their own initiatives,” rather than stepping aside for more senior members of the royal family — including William and Kate. Unfortunately, the alleged tactic didn’t work.

Brothers and Wives: Inside the Private Lives of William, Kate, Harry, and Meghan

Andersen claims that William was left more “offended” than anything. And although other polls had shown that William and Kate were more popular than Prince Charles and Camilla, Duchess of Cornwall, William always tended to “downplay” their relevance or importance for sake of following the firm’s established line of succession, duty, and more. Since the alleged 2019 exchange, however, there have been noticeable signs that the pressure of popularity and relevance has impacted William and Kate.

The couple have since gone on to engage with the public in more innovative ways. From their Instagram Live Q&As to starting their own YouTube channel, William and Kate have focused more than ever on retaining their connection to the public in recent years, and knowing that Harry once pointed out to William the Sussexes’ internet popularity throws those initiatives into a new light. William has been charged with carrying forward the monarchy since he was a young child — and particularly as polls showed him to be more popular than Charles, the Queen and others clearly relied on William to maintain the royals’ relevancy into the next generation.

We’re sure Harry didn’t intend to make William afraid for his royal future by showing him this poll — but given the mounting pressures William has faced all his life, we also understand why he might have a strong reaction to Harry doing it anyway.

Before you go, click here to see the best photos of Prince Harry and Prince William growing up together over the years.