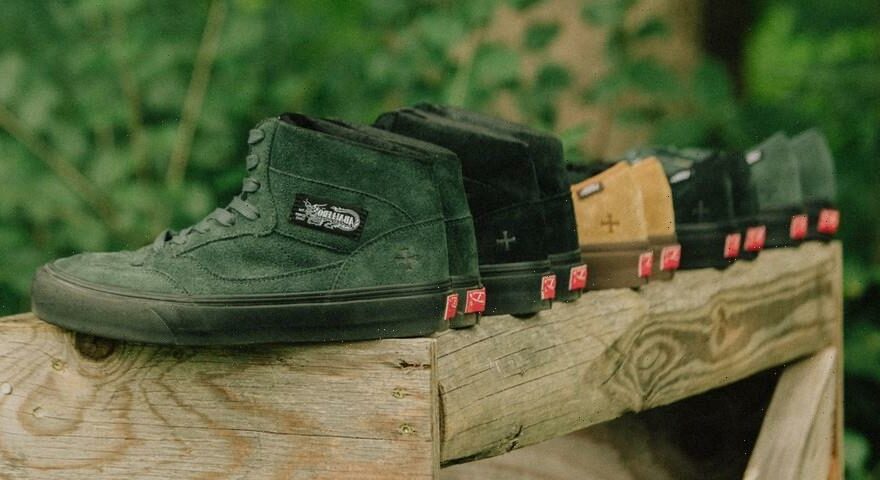 NOAH and Vault by Vans have reunited for fall-ready takes on the Caballero VLT LX and Authentic One Piece LX. Consisting of two iterations of the Caballero and three makeups of the Authentic, the collection offers elevated style and classic construction in equal measures. It also serves as the sixth collaborative effort between the two parties since they began their partnership in 2018.

First up is the Caballero in spruce and black. A high-cut sneaker originally designed for Steve Caballero in 1988 — and often modified with tape and scissors before Vans introduced the Half Cab in 1992 — the Caballero features full suede constructions, a debossed NOAH cross on the lateral heel and original dragon branding on the quarter. Black midsoles with a red rubber heel stamp complete the look.

Next is the Authentic One Piece VLT LX in spruce, tan and black. Though its’s very similar to the OG Authentic, it discards the stitched forefoot detail in favor of an alternate one-piece upper that gives it its name. All three styles feature a tonal upper with debossed NOAH branding and metallic eyestays. The spruce and black pairs are finalized by black midsoles, white the tan pair opts instead for a classic gum.

The NOAH x Vault by Vans Caballero VLT LX and Authentic One Piece VLT LX are set to release via the NOAH webstore and NOAH’s NYC flagship at 195 Mulberry Street on September 16. Cabs are priced at $98 USD, while Authentics arrive at $88 USD.

For more from the world of footwear be sure to check out the latest installment of HYPEBEAST’s weekly Sole Mates series, in which influential designers, creatives, musicians, artists and more explain the personal stories behind their favorite shoes.
Source: Read Full Article