After four seasons as a co-host, Meghan McCain announced today that this would be her final season on The View. The daughter of the late Arizona Senator John McCain revealed the news during the July 1 episode of the ABC daytime talk show. In her statement, she shared with viewers and her co-hosts that she ultimately wants to spend time with her young family, including raising infant daughter Liberty in Washington D.C. 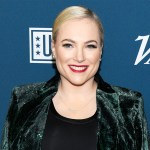 “We have this incredible life here,” she said of living in D.C. with her daughter and husband, Ben Domenech. “We’re surrounded by my family, his family, by friends, by this incredible support unit. And I think, as any new mom knows, when I think about where I want Liberty to have her first steps and her first words, I just have this really wonderful life here that ultimately I felt like I didn’t want to leave,” she explained.

McCain’s reasoning for walking away from The View is more than understandable, considering that she welcomed Liberty in late September 2020 and has been balancing a working mom lifestyle. The major life change has also led her to advocate more for paid maternity leave, a topic she discussed and actually agreed on during a conversation with The View co-hosts in January 2021.

McCain and her young family settled back in D.C. when The View went virtual during the pandemic. McCain credited her experiences on the show as being “hands-down greatest, most exhilarating, wonderful privileges of my entire life…It is a privilege to work alongside such strong, brilliant, intelligent, incredible broadcasters like the four of you. You are the most talented women on all of television, hands-down, and it has been so incredible to be able to do this with you.”

Before you go, click here to see celebrity moms who quit Hollywood to raise their kids.