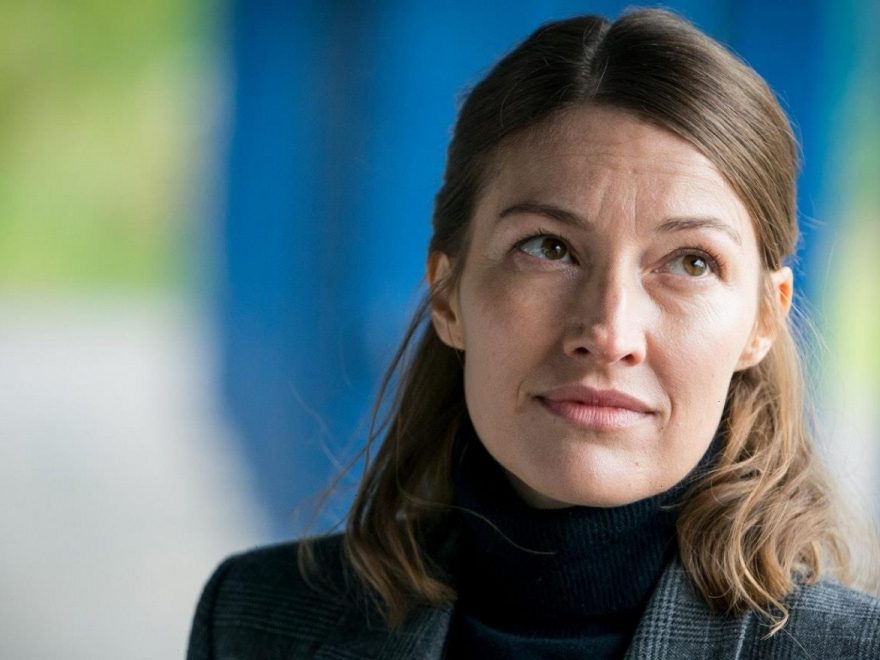 It may have been the penultimate episode in what is probably one of the most hotly anticipated TV seasons in some time, but last night’s instalment of Line Of Duty certainly did not disappoint.

From car chases to covert operations, there was plenty to sink your teeth into as it was revealed that PC Ryan Pilkington (Gregory Piper) – perhaps the slimiest villain in Line Of Duty history – was the victim on the other end of the gunshots we heard at the end of last week’s episode.

However, in true Line Of Duty fashion, the death of one of the series’ main characters was not even the most dramatic moment in last night’s show – in fact, it was almost forgotten within the first five minutes. Instead, it was the interrogation of DCI Joanne Davidson (Kelly Macdonald) that really stole the show.

Earning the title for the show’s longest ever interrogation scene at an impressive 29 minutes, 22 seconds, the glass box showdown between Davidson and DI Steve Arnott (Martin Compston), Superintendent Ted Hastings (Adrian Dunbar) and DC Superintendent Patricia Carmichael (Anna Maxwell Martin) was filled with intense moments and shock revelations that left us with plenty of questions ahead of next week’s season finale.

However, as gripping as the scene was to watch, it took a lot of work to put the whole thing together, Macdonald has revealed.

Appearing on BBC Breakfast this morning to speak about last night’s episode, the award-winning actor spoke about the challenges of filming such a lengthy scene – and how the legacy of the show’s interrogation scenes added to the pressure she felt.

“You’re aware that the glass box scenes are really pivotal and it’s what people love,” she explained. “Adrian [Dunbar] told me at the beginning, it’s a chance for the actors to flex their muscles a little bit – the leads that come in. And yeah, it was really daunting.”

Macdonald continued: “We filmed it over two days, and the first day it was all on me. We did 50 camera set-ups, and that is extraordinary. And filming the scene took over half an hour, so we could only fit so many takes into the day.

“It was just unlike anything I’ve ever done.”

Kelly Macdonald said filming the record-breaking interrogation scene in last night’s episode was unlike “unlike anything” she’d ever done before.

Elsewhere in the interview, Macdonald revealed how she finds it difficult to watch the show or engage with the excitement about it online – meaning she’s largely unaware of how big the response to the show has been.

“I’m not watching it and I’m also not going online, so I’m not too aware,” she said.

“You said 13 million [were watching] and that’s a lot of information – that’s a lot of people watching it! But I’m not one of them – I watched the first episode and went online and it took me a week to [be OK]. It was just too much for me I’m afraid.”

Concluding the interview with reference to next week’s final episode, BBC Breakfast presenter Dan Walker tried his best to get a hint from Macdonald about what might be coming next for her character – but in true Joanne Davidson fashion, she was having none of it.

“So, Joanne Davidson, do you know who the fourth man is?” Walker began before diving into a long list of questions, all of which Macdonald answered with her character’s now-signature response: “No comment”.

“I’m giving up, this is pointless,” Walker finished with a laugh.

Whatever is set to happen to DCI Joanne Davidson in next week’s episode, it’s clear we won’t be getting any hints from Macdonald herself.

Instead, we’ll just have to bide our time pouring over the latest fan theories and reviewing what’s happened in the series so far before we finally get to enjoy the Line Of Duty season six finale next Sunday.