Welcome to Best of Late Night, a rundown of the previous night’s highlights that lets you sleep — and lets us get paid to watch comedy. We’re all stuck at home at the moment, so here are the 50 best movies on Netflix right now.

‘A Step in the Right Direction’

On Tuesday night, several late-night hosts addressed the breaking news that Derek Chauvin, a former police officer in Minneapolis, had been convicted of murder in the death of George Floyd. The case prompted mass racial justice protests last year after Chauvin, who is white, was filmed kneeling on the neck of Floyd, who was Black, for more than nine minutes as Floyd pleaded for his life.

“After 10 hours of deliberation, a jury in Minneapolis decided that it’s illegal for the police to murder people; that Black lives matter,” said Stephen Colbert.

“It’s hard to celebrate, because a man is still dead, but there is a sense of relief that at least this one injustice was not compounded with indifference. And it could easily have gone the other way. No matter what you saw on that tape, this nation does not have a great track record on this subject. But at least in this case, this man faces accountability.” — STEPHEN COLBERT

“But justice is a far more difficult goal. America still has a problem of over-policing and systemic racism, but hopefully this is a step toward a future where police being held accountable for their actions isn’t headline material, and a hope that accountability today is a deterrent for tomorrow.” — STEPHEN COLBERT

“Today is one stop on a journey that began last May and led to protests calling for that accountability in every town and every city in America. But this is just one stop. There is more work to be done, and it’s work that all of us should be committed to, because as Ben Crump, the Floyd family lawyer, reminded us today, justice for Black America is justice for all America.” — STEPHEN COLBERT

“And while this is a step in the right direction, there’s still a lot of work to be done. Too often, justice isn’t served, and the need for police reform remains. We all must continue to call out injustice until things change for the better.” — JIMMY FALLON

“Real justice would be Black Americans not having to live in fear of being stopped by police and killed, and surely that is a verdict that we need to work towards. And that can be the verdict that one day we can celebrate.” — JAMES CORDEN

“I think we’re all grateful that it went the way that it did. In this case, the jury made the correct decision, a unanimous decision, which is a step in the right direction. And I hope the verdict itself brings comfort to the family of George Floyd and all those who mourn his death. And I also want to say, ‘Good luck in prison, Derek, you’ll need it.’ That’s right. I hope you’re there for a very long time.” — JIMMY KIMMEL

“4/20, of course, is a holiday for pot smokers and pot eaters who celebrate 4/20 by doing pretty much exactly what they do every day.” — JIMMY KIMMEL

“Right now there is so much smoke in New York City, every apartment looks like it elected a new pope.” — JIMMY FALLON

“And this April 20 is the big one, because today, 4/20 turned 50. Fifty! That means it’s old enough to sneak off into the garage while the kids are at soccer practice and smoke half a joint, but then it has a panic attack, so it spends the afternoon on the couch drinking water and watching QVC. Far out, man.” — STEPHEN COLBERT

“This is the 50th anniversary because, back in 1971, a group of California high school students used to gather to smoke pot every day at 4:20 p.m. Admirable punctuality for a group of kids who were always high.” — STEPHEN COLBERT

“Not really as edgy, is it, as it used to be? Do you know what I mean? Now that marijuana is legal in California, you know? Sort of feels like the equivalent of White Wine Day.” — JAMES CORDEN

Mike Lindell, the MyPillow founder and fiercely loyal Trump supporter, responded to Jimmy Kimmel’s Monday-night monologue, in which the host jokingly invited him on his show.

What We’re Excited About on Wednesday Night 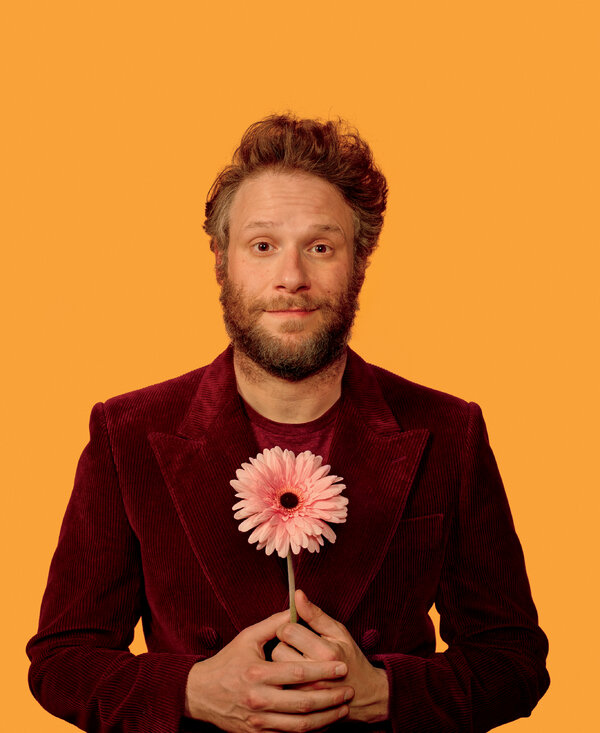 Seth Rogen, above, has made a pivot from Hollywood stoner to homemade ceramist.