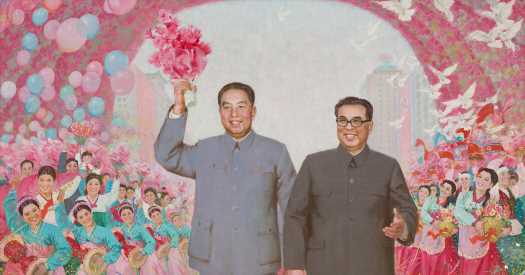 BERN, Switzerland — Against a fiery sky, North Korea’s former leaders Kim Il-sung and Kim Jong-il watch with beaming smiles as missiles whiz above them in bursts of light and clouds of smoke. The painting — “The Missiles,” by Pak Yong-chol — is one of the collector Uli Sigg’s prized possessions, acquired through persistence, persuasion and contacts forged during his term as Switzerland’s ambassador to North Korea in the 1990s.

Sigg said he used to visit the North Korean national art museum, in the capital, Pyongyang, whose works glorify the country’s strength. He was already familiar with the Socialist Realist style of art favored by the Communist governments of China and the Soviet Union, he added — but he was struck by North Korea’s more emotional variant.

“It was then that I decided I had to acquire an artwork,” he said in a recent video interview. “You can buy paintings showing happy laborers with rosy cheeks. But I wanted one with the leaders.”

His first approaches to North Korean officials were rebuffed, he said. Images of the dictators “were not allowed to be shown outside North Korea, except in the embassies — and they are certainly not in private hands,” he said. “That was unimaginable.”

Sigg eventually persuaded the officials, he said, and built one of the most important collections of North Korean art outside the country. Pieces from the collection have recently gone on display at the Kunstmuseum in Bern, Switzerland, in a rare presentation of North Korean art in the West. More unusual still, the show displays the works alongside art from the country’s neighbor and enemy, South Korea. 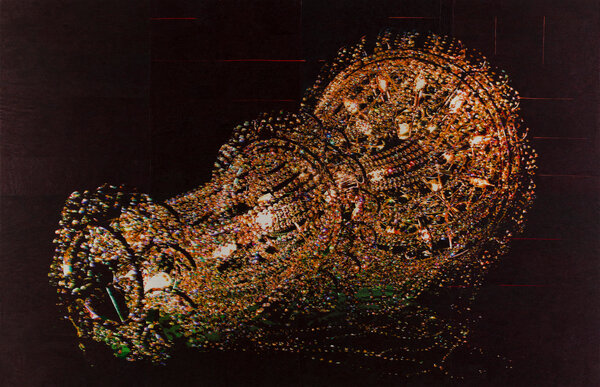 Running through Sept. 5, the exhibition, called “Border Crossings,” was “sensitive” for both sides, Sigg said. Showing South Korean art is illegal in the North, and for many years, North Korean art was banned in the South, too. Even before the exhibition opened in late April, it prompted protests from both Koreas. Sigg, who left Switzerland’s foreign service in 1998, has needed his diplomatic skills again.

Technically still at war, the two countries are separated by the 155 mile-long Demilitarized Zone fortified on both sides with barbed wire and anti-tank defenses. No one is allowed across the border. Though the artists of the divided peninsula share a common cultural tradition, they work in different worlds.

Those in the South enjoy creative freedom in a society whose pop music has spread across the world; Seoul, the capital, is a major Asian art hub with a lively, diverse gallery scene. In the North, all professional artists are organized in two official studios that work under the strict control of the communist dictatorship, isolated from international influences.

The only paintings on public display in North Korea are official commissions from those studios. With dramatic theatricality, but in a realistic style, the country’s leaders are portrayed almost as religious icons, while workers appear as heroes, and landscapes accentuate the power and grandeur of its natural scenery.

The Kunstmuseum extended invitations for private tours to officials from the Swiss embassies of both North and South Korea before the official opening. Neither accepted. A spokesman for the South Korean Embassy said that the ambassador’s schedule had prevented him from attending; the North Korean Embassy didn’t respond.

But this year, Pyongyang’s representatives in Bern complained to Sigg about an artwork that the museum was using to promote the show on its website, he said. Adapted from a photograph, the watercolor “Two Great White Sharks” shows North Korea’s current leader, Kim Jong-un, surrounded by military personnel and peering into a reservoir where the deadly creatures glide beneath the surface. (Kathleen Bühler, the show’s curator, said the museum removed the work from the website, but not from the exhibition.)

While North Korean defensiveness was to be expected, Sigg said, he hadn’t counted on objections from democratic, liberal South Korea. The exhibition received a grant of $77,000 from the government’s Korea Foundation, which supports South Korean arts abroad. But weeks before the opening, lawmakers there accused the foundation of promoting North Korean propaganda in Switzerland. The South Korean Foreign Ministry asked Sigg to prove that none of the North Korean artworks had been purchased in breach of international sanctions against the North, he said.

As a neutral country, Switzerland maintains unusually good relations with North Korea. When Sigg became ambassador, in 1995, the North was in the grip of a bitter famine, and it was his task to inspect the fallout and report to the United Nations. (Swiss humanitarian agencies then taught North Korean farmers new techniques in potato cultivation and animal breeding.) Kim Jong-un even attended school in Bern at around the same time.

Though he visited North Korea many times during his term, Sigg was based in Beijing, where he was also Switzerland’s ambassador to China. There, he and his wife socialized with many artists, he said, and contemporary Chinese art is the focus of his huge collection. A donation by Sigg of more than 1,400 Chinese works forms the basis of the new M+ museum in Hong Kong, which is set to open in June.

Sigg said that he began collecting South Korean art in 2008, noting that the works he has acquired all address the division of Korea. The pain of the rupture immediately confronts visitors to the Bern museum with a painting of the Demilitarized Zone in the entry hall.

“Between Red,” by Sea Hyun-lee, an artist from the South, is painted completely in shades of that color. Devoid of people, it echoes traditional Korean landscape painting with an elevated view of curving rivers, jagged mountains, clusters of abandoned houses and blossoming orchards whose fruit may have gone unharvested since the area between the two Koreas was sealed off in 1953.

A different kind of pain is on view high above eye level in the same space, where a vast North Korean canvas hangs. Called “The Year of Shedding Bitter Tears,” the work depicts the 1994 funeral of Kim Il-sung. In a crowd of distraught onlookers, one man has sunk to the ground, his head almost on the pavement; another holds his hand to his heart in anguish. Kneeling women in uniform sob into their hands and handkerchiefs. Even the sky weeps from dark storm clouds.

Less melodramatic, but more moving, are the works in which South Korean artists attempt to make connections across the border. In an operation worthy of a Cold War spy thriller, Kyungah Ham used Chinese intermediaries to smuggle her textile designs and instructions to North Korean embroiderers, whom she paid to produce the works.

One of those, “Hiroshima & Nagasaki Mushroom Cloud,” is based on a black-and-white aerial photograph taken after the explosion of an atomic bomb at the end of World War II. “For those of us living in a divided country under the threat of nuclear weapons, the work is not simply a record of the past,” the artist says in an interview in the catalog. The embroideries, beautifully executed in long, even stitches, are a testament to North Korean craft expertise.

Sojung Jun’s video work, “Early Arrival of the Future,” explores the shared heritage of North and South Koreans. She invited two pianists — Kim Cheol-woong, who defected from the North, and Uhm Eun-kyung, from the South — to arrange and perform a duet combining traditional melodies from a North Korean folk song and a South Korean nursery rhyme. In the filmed performance, they face each other across two grand pianos, and close-ups show their subtle coordination by eye contact and facial expression.

But art can divide as well as connect — as Sigg knows only too well. He said that he had hesitated a long time before deciding to stage the exhibition in Bern, recognizing that it risked destroying his relations with North Korea. He said it was possible that he would now be denied entry if he applied for a visa.

“What is new this time is that I am facing protests from two states — usually, it’s just one,” he said. “But I am relatively relaxed. You have to have a thick skin when it comes to contemporary art.”

Border Crossings: North and South Korean Art from the Sigg Collection
Through Sept. 5 at the Kunstmuseum Bern in Switzerland; kunstmuseumbern.ch.