Kentaro Miura, who reached a worldwide readership for more than 30 years with his Japanese manga series, “Berserk,” which set the standard for artistic originality and narrative boldness in the fantasy media industry — in card games, comics, video games and animated series — died on May 6. He was 54.

Kate Jay, a spokeswoman for Dark Horse Comics, Mr. Miura’s English-language publisher, said the cause was acute aortic dissection, a tear in the aorta branching off from the heart. She did not say where he died.

According to Dark Horse Comics, “Berserk” has sold about 50 million books worldwide and about 3 million in the United States. It originated in a Japanese magazine in 1989 and soon became a book series, in multivolume hardcover editions and single-volume paperbacks small enough to fit into a coat pocket.

Since appearing in book form in the U.S. in 2003, “Berserk” has provided sophisticated fare to a generation of Americans who grew up devoted to other Japanese fantasy franchises, like the video game series Pokémon and the anime TV show “Dragon Ball Z.”

The series follows the exploits of Guts, also known as the Black Swordsman, a one-armed, one-eyed former mercenary who inhabits a world of grotesque monsters, roving militia groups and medieval weaponry. For much of the series Guts seeks a safe haven for his love interest, Casca, and falls in and out of an alliance with Griffith, a friend who matches Guts’s own fighting prowess.

Mr. Miura (pronounced mee-oo-ra) was an “artist’s artist,” said Dave Rapoza, an illustrator who has designed covers of Marvel comics and cards for the card game Magic: the Gathering. In most manga, he said, the drawing is “cartoony and simplified.”

“Then you see his work,” Mr. Rapoza said of Mr. Miura. “Everything was so detailed and beautiful. They felt like old Dante’s ‘Inferno’ illustrations.”

Mr. Miura’s drawings, in pen and ink for most of his career, were also compared to the paintings of the Dutch Renaissance master Hieronymus Bosch, particularly for Mr. Miura’s images of little human figures occupying sweeping fantastical landscapes. These imaginary worlds tended toward the hellish (with moments of the sublime), made up of corpses, skeletons, monsters and, in one of the story’s pivotal moments, a gigantic, ominous eclipse. 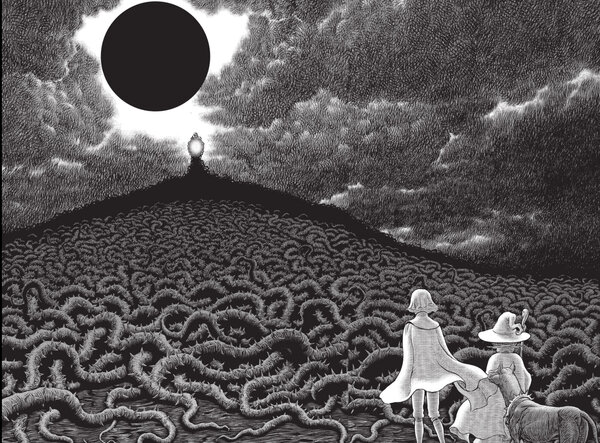 Mr. Miura was known for his spectacular, apocalyptic style; specific images — a humongous sword, a monster cloaked in shadow — are immediately recognizable to his fans.

In a 2019 interview with the Japanese manga news site Comic Natalie, he recalled being yelled at by his editor for endlessly refining his work; when using a digital art software, for instance, he drew pixel by pixel. He had a studio with five full-time employees, though on “Berserk” they were generally allowed to help only with backgrounds.

The influence of “Berserk” can be seen in popular video games like Dark Souls — whose monsters adopt the gargantuan scale of Mr. Miura’s — and on such TV shows as “Castlevania,” on Netflix.

In conceptualizing “Castlevania,” Adam Deats, the assistant director, said, “Miura was the very first thing I brought up.”

Many readers formed a bond with the characters in “Berserk,” who often show vulnerability, including frequent displays of grief. The narrative would grapple with otherwise taboo subjects, like rape. Mr. Deats praised the “bravery” of Mr. Miura’s storytelling.

“He was willing to kill off a lot of named characters in one fell swoop to bring Guts to his lowest point,” said Mr. Deats. “Playing things a little bit darker and letting ourselves linger on things was something I always took from his work.”

Kentaro Miura was born on July 11, 1966, in Chiba, a city east of Tokyo. His parents were artists. He created his first manga for his classmates when he was 10 and won a new artist award from the Weekly Shonen Magazine when he was a teenager. In high school he joined a clique of boys all hoping to become manga artists; they were the inspiration, he later said, for the Band of the Hawk, a group of friends and fellow mercenaries in “Berserk.”

Mr. Miura graduated from the art college of Nihon University in Tokyo in 1989 and published the first installment of “Berserk” that year in the October edition of Animal House magazine. The series continued to appear in that magazine, later renamed Young Animal, for the rest of his life. Hakusensha, the Japanese publisher of Young Animal, collected the stories into “Berserk” books, which Dark Horse Comics then translated, with Duane Johnson serving as the chief translator.

Information on Mr. Miura’s survivors was not immediately available.

Thirty years after “Berserk” began, he was looking forward to continuing it for many more. He said in 2019 that it was only “approaching its back half.” (With his death, the future of the franchise remains uncertain.)

Like other fans who had expected Mr. Miura to resolve the tale, Mr. Deats said he found the news of Mr. Miura’s death “soul crushing.”

“I wanted to see the thematic end to the story,” he added. “The impact of the story has been so great that I think about what it was doing or what it was saying all the time, even into my 40s now. I don’t know if it will ever stop influencing me.”