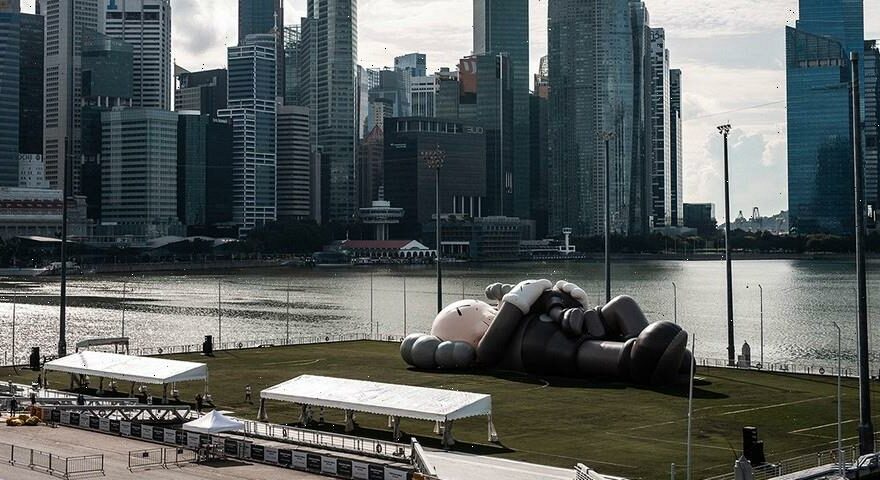 According to reports, the KAWS:HOLIDAY installation at The Float @ Marina Bay in Singapore has been ordered to stop, due to a court order.

Reports note that The Ryan Foundation, a non-profit organization promoting arts awareness and developing art projects to build communities in Singapore, filed for an interim injunction citing breach of intellectual property rights and misuse of confidential information. The court order was served to a representative of AllRightsReserved, the Hong Kong-based creative studio handling the exhibition. Aside from effectively stopping the exhibition, the injunction has halted all sale and distribution of merchandise associated with the exhibition, along with any advertisement and publicity of the event.

The Ryan Foundation was reportedly in talks with AllRightsReserved to bring the KAWS:HOLIDAY exhibition to Singapore back in 2019, but negotiations were unsuccessful in the end.

In an official statement, AllRightsReserved has refuted The Ryan Foundation’s “groundless” claims and has called the injunction an attempt to “cause interruption to the KAWS:HOLIDAY Singapore exhibition.” ARR also revealed that “it is in the process of seeking urgent legal advice and will apply to court to challenge the prohibitory injunction order.” Ending with an apology for those interested in the exhibition. “Our company takes this incident very seriously and will take all possible steps to ensure that this exhibition can progress in accordance with the laws of Singapore. We apologize for any inconvenience caused.”

KAWS also delivered a statement regarding the situation, “Together with ARR, I am honoured to exhibit KAWS:HOLIDAY here in Singapore. The reception that I have received from the people here has been overwhelmingly positive and I am grateful to have this opportunity.” Adding, “I have no contractual agreement with The Ryan Foundation. Their accusation is baseless.”

The KAWS:HOLIDAY Singapore exhibition at The Float @ Marina Bay is now temporarily closed, until further notice.

In case you missed it, the One Piece creator recently reacted to news of live-action adaptation casting.
Source: Read Full Article