The house lights inside Madison Square Garden went down Sunday night, and the thousands of fans, packed like sardines in their seats, stood as if on cue. As they roared their approval, bouncing in place on the balls of their feet, the ground began to tremble. Cellphone flash lights illuminated the darkness.

The sound of a keyboard echoed through the rafters. Dave Grohl, the Foo Fighters’ frontman, appeared on the stage.

“It’s times like these, you learn to live again,” Grohl sang.

The lyrics had seldom felt so on point.

After many difficult months of illness, death, hardship and pain, and shifting limits on how many people could gather, especially indoors, arena rock returned to New York City just over a year after the city was the center of the outbreak. It was the Garden’s first concert in more than 460 days, and it drew a full-capacity crowd that was asked to show proof of vaccination to enter. Inside, people grooved, tightly packed, with few masks visible. 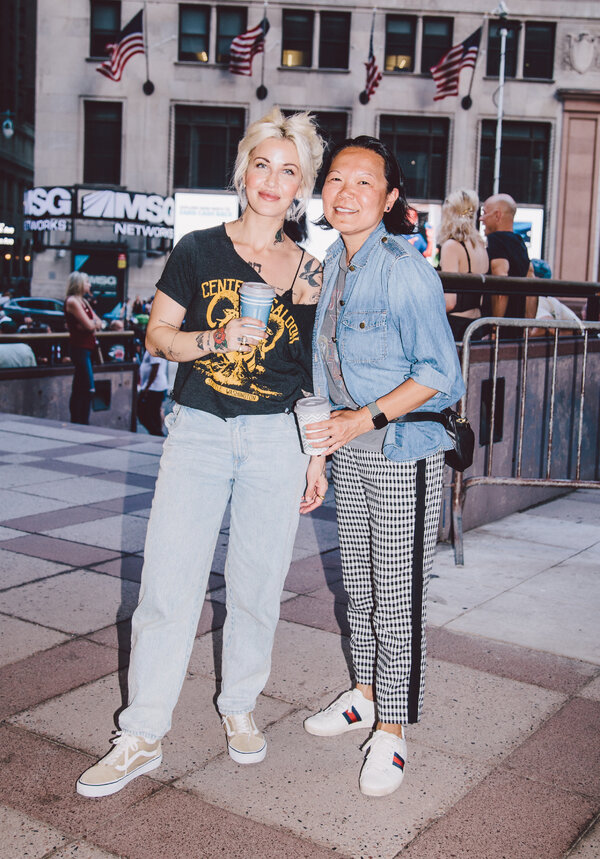 “This is a book end to what we have gone through for a year and a half,” said Heather Morris, 47, of Chicago. “We’ve survived it. We’re going forward.”

The return of concerts to the garden comes at an in-between moment when it comes to the pandemic in the United States. As more and more Americans have become vaccinated against the coronavirus, deaths from Covid have fallen off considerably. But only about two-thirds of adults in the United States have gotten at least one dose of the vaccine, and there are still parts of the country where vaccinations lag.

But after a year of being stuck inside, people have been eager to restart their hobbies and routines and to connect with one another again. Last week, both New York and California, where more than 70 percent of adults have received at least one dose of the vaccine, lifted virtually all coronavirus restrictions. The Centers for Disease Control and Prevention has said fully vaccinated people can resume activities without wearing a mask. The rapidly shifting rules allowed the Foo Fighters concert to go forward.

On Sunday, a concert attendee would have had to squint to see signs of the pandemic persisting. In many ways, the evening felt like prepandemic times.

In a sea of thousands, only a few patrons here or there wore face coverings. Thousands of vaccinated people, their faces bare, belted out the lyrics to well-known songs, sending aerosols flying through the air. No one seemed concerned.

Fans were packed together. A sudden arm gesture could send a beer flying. Strangers hugged and high-fived. They bumped into each other in the busy concourse. They punched the air, swung their hair and danced, twisting and swaying at their seats in a state of high-decibel music-induced bliss.

It was “just epic,” said Rachael Cain, 51, who was among the first people to arrive at the Garden on Sunday afternoon.

But there were subtle reminders of the pandemic everywhere. Hand sanitizer pumps were clamped to the walls, and wipes could be found near any napkin dispenser. Ticketing was digital and concession buying appeared mostly cashless.

At the entrances, staff members checked people’s vaccine cards with varying levels of scrutiny. Some asked for identification to match with proof of inoculation, in a slow-moving process. Other checkers simply waved people through as they flashed their passes while walking by. A small anti-vaccine protest on the sidewalk outside drew little attention.

Several patrons said that the vaccine requirement helped them feel safe about returning to such a big indoor gathering.

“I was expecting it to be a little longer before I came to a concert again,” said Nick Snow, 29, who was among the few fans who wore a mask while inside the arena. “The precautions with the vaccinated only, they help.”

Grohl himself took care to acknowledge from the stage the unique milestone he and his band were participating in. At various points during the roughly three-hour show, he asked the crowd rhetorically if they had missed music, and mused about how good it felt to be around thousands of people while playing rock songs. The band sang “My Hero” as a tribute to those who had made the concert possible. And in a surprise cameo to celebrate the occasion, the band brought out the comedian Dave Chappelle to sing a cover of Radiohead’s “Creep.”

“Welcome back, New York City!” Chappelle yelled as he exited the stage.

The show represented the return of some old, familiar comforts that music lovers may not soon take for granted again. There was call and response; people gesturing wildly to no one in particular; fans screaming the lyrics to songs only to realize their voices were drowned out by the music; and an entire floor section jumping up and down as one wave.

“I would get vaccinated 10 times over just to see a live show like this with people,” said Rich Casey, 53, of Massachusetts.

Having reached the ground floor of the venue and the echoey plaza that leads to the street, Foo Fighters fans seeking one last communal experience for the night sent up a chant, reveling again in one of the band’s most well-known songs, “Best of You.”

Then they erupted in one final cheer and walked out into the New York night.