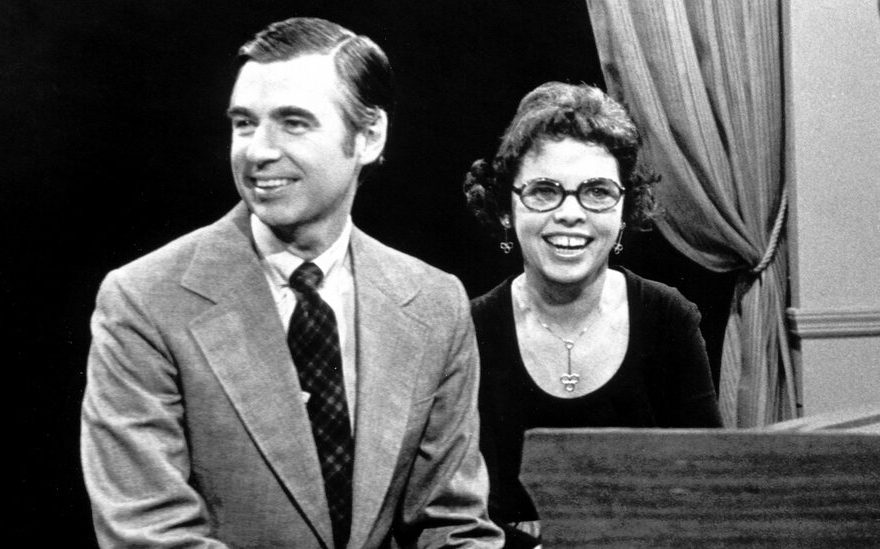 Joanne Rogers, who as the gregarious wife of Fred Rogers, the influential creator and host of “Mister Rogers' Neighborhood,” spread his message of kindness after his death in 2003, died on Thursday at her home in Pittsburgh. She was 92.

Her death was announced by Fred Rogers Productions, which produces children’s programming for public television.

“So much a part of me was Fred,” Mrs. Rogers said in a TEDx Talk in 2018. “One of the things he talked about was making goodness attractive, and I think that’s something that we can try to do, and it’s quite an assignment.”

Mrs. Rogers was as comfortable being Fred Rogers’s wife as she was performing for nearly 40 years in a piano-playing duo with her college friend Jeannine Morrison. Mr. Rogers was also a trained pianist, but he was not considered as adept as his wife.

Over 50 years of marriage, Mrs. Rogers was a supportive force behind her husband, who, starting in 1968, welcomed children into his television neighborhood, where he gently sought to lift their self-esteem and taught them to cope with real-world situations like divorce, racism, death and war. The program ended production in 2001.

Mrs. Rogers appeared a few times on “Mister Rogers’ Neighborhood,” but she became a much more public presence over the last three years. She vigorously promoted “Won’t You Be My Neighbor?” (2018), Morgan Neville’s documentary about her husband, and “A Beautiful Day in the Neighborhood” (2019), a feature film with Tom Hanks as Mr. Rogers and Maryann Plunkett as Mrs. Rogers.

She said that her husband would have been thrilled that Mr. Hanks portrayed him. “He was a huge Tom Hanks fan,” she told the ABC News program “Nightline.” “He saw ‘Forrest Gump’ about 40 times. He said he saw something different every time.”

In an interview in 2019 with The Christian Post, an online news publication, she was asked if she and her husband had fought.

Not really, she said, but “sometimes I’d come in and I would have been going at it with somebody, like a garage mechanic, who didn’t have much respect for a woman, and I’d say, ‘Uggggh.’ And he’d say, ‘You never know what was going on in his life earlier.’ I wanted him to be mad, like me, but that was good. He calmed me down.” 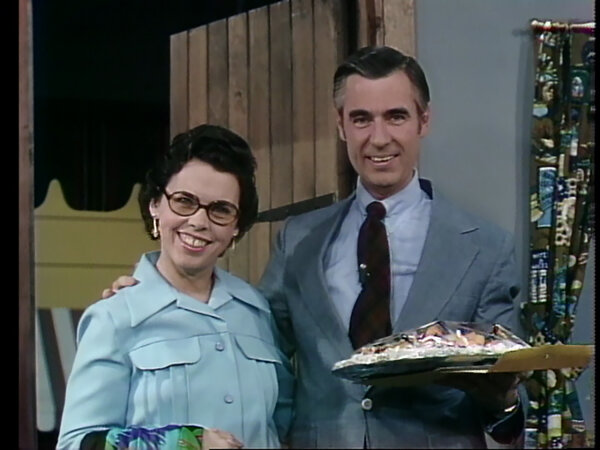 Tom Junod, whose 1998 Esquire article about his friendship with Mr. Rogers was adapted into “A Beautiful Day in the Neighborhood,” said in an interview that Mrs. Rogers had long spread her husband’s simple, decent gospel “person by person,” and that “her presence in my life made me never forget Fred.”

Mr. Junod, who spoke often to Mrs. Rogers, added: “Fred was not a solemn man. But he was like a lot of other great men — you could see the weight of what he did and stood for on his shoulders, whereas she seemed to shrug that weight off.”

Sara Joanne Byrd was born in Jacksonville, Fla., on March 9, 1928, 11 days before her future husband. Her father, Wyatt Adolphus Byrd, was a traveling coffee salesman who later worked for the Post Office. Her mother, Ebra (Edwards) Byrd, was a homemaker who shared with her daughter her love of music; she played ragtime on the piano by ear. Joanne began taking piano lessons at age 5.

“I had to learn the alphabet at the time — from A to G,” she said with a laugh in the TEDx Talk. “That’s all I needed.”

Mrs. Rogers received a scholarship to Rollins College in Winter Park, Fla., where she earned a bachelor’s degree in piano performance. It was there that she met Mr. Rogers, a transfer from Dartmouth College.

“I really liked him a lot,” she was quoted as saying in Maxwell King’s book “The Good Neighbor: The Life and Work of Fred Rogers” (2018). “But we didn’t date singly very much, except for dances. I would always invite him to the sorority dances the two years I was there with him.”

A year ahead of Mr. Rogers, she studied music at Florida State University in Tallahassee, earning a master’s degree. While there she studied under the Hungarian composer and conductor.

She married Mr. Rogers in 1952, a year after he was hired by NBC in an apprentice position.

Mrs. Rogers did some voice work on her husband’s first television program, “The Children’s Corner,” which was seen in Pittsburgh from 1954 to 1961. And on “Mister Rogers’ Neighborhood,” she was the inspiration for the puppet character Queen Sara, wife of King Friday XIII. She also taught piano at the prep school at Chatham College (now University) and at Carlow College, both in Pittsburgh.

She began playing concerts with Ms. Morrison in the 1970s and continued until five years ago, when arthritis forced her to stop.

“We were a remarkable team,” Ms. Morrison told The New York Times in 2019. “We got a lot of good reviews in newspapers because of our precision. We just felt things the same.”

Mrs. Rogers “really cared about kids and was involved in the Pittsburgh Youth Symphony Orchestra,” said Bill Isler, the president emeritus of Fred Rogers Productions. “We always talked about how to get kids involved in the arts.” (Mrs. Rogers was on the orchestra’s advisory board.)

She is survived by her sons, James and John, and three grandsons.

When Mrs. Rogers arrived for the premiere of “Won’t You Be My Neighbor?” in Pittsburgh, Mr. Junod recalled, she made her entrance with blood coursing down her face.

“I said, ‘Joanne, what happened?’ and she said, ‘I fell on the way out to the car they sent for me.’” Mr. Junod asked her if she wanted to go to the hospital, he said, but “she was aghast and said, ‘Do you think I’d let a little thing like that get in the way of this?’”

Someone gave her a tissue, he said, and she watched the documentary.