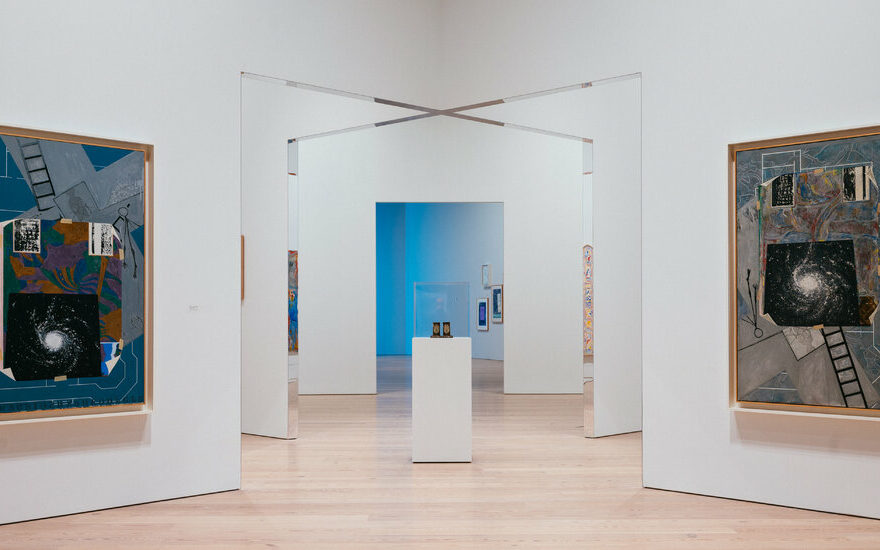 “Jasper Johns: Mind/Mirror,” the largest survey of the artist’s work anywhere to date, officially opens next Wednesday, and is designed to be not just a blockbuster, but a blockbuster x 2.

The American artist’s last East Coast survey, at the Museum of Modern Art in 1996, had 225 works; the new one has twice that number. The earlier show filled two floors of MoMA; this one spreads over two museums, the Whitney Museum of American Art and the Philadelphia Museum of Art. It looks differently splendid at each.

Should you make an effort to see both halves? Absolutely. They’ve been designed as separate but complementary experiences, and each, though different in content and emphasis, tells a full Johns story. Yet it’s the story they tell together that’s the truer one, the one that lets a notoriously complicated body of art look and feel as richly original as it really is.

And that richer view seems necessary given that, despite Johns’s uncontested historical status, a critical consensus on him remains unsteady. It certainly was in 1996. One frequently voiced take on his career at the time was that he had a hot, fast, early run with his flags, maps and targets, then got tangled up in unproductive experimentation, and finally settled into decades of hermetically personal and repetitive work. He went from inspired Pop progenitor, proto-Conceptualist and Neo-Dada game changer to teasing puzzle master.

One look at the new retrospective tells you that take was dead wrong. Repetition? His art is built on it. And it’s strategic and inventive. Six decades on, his career — he’s 91 and still a studio rat — continues to be an active conceptual spreadsheet and a generative memory machine.

Personal? It’s the feature of his art I most treasure. He has always seemed drawn to, or at least unafraid of, subjects that his contemporaries ignore, or dodge, or handle with Teflon mitts: mortality, spirituality, human intimacy, and the fear of it. And, again, a sense of his investment in these elements comes through most clearly when the span of his output — early and late, “major” and “minor” — is fully laid out, as it is in this two-venue retrospective, organized by Scott Rothkopf, senior deputy director and chief curator at the Whitney, and Carlos Basualdo, senior curator of contemporary art at the Philadelphia Museum.

Some of their paired thematic installations are straightforwardly historical. Philadelphia recreates a 1960 Johns solo exhibition at Leo Castelli Gallery, a show that still looks like a sendup of then-fashionable “action painting.” A corresponding installation at the Whitney evokes a 1968 Johns solo, in which the ethereal painting “Harlem Light” attests to his move to mural scale.

Two other now-canonical monuments, “According to What” (1964) and “Untitled” (1972) — get rooms of their own, one at the Whitney, the other in Philadelphia. So do series of virtuosic prints. Lining a Whitney gallery is the great 1982 series of monotypes based on the artist’s 1960 bronze sculpture of a Savarin can. In the one in Philadelphia, large high-color 1990s etchings, packed with quotes from older work, optically leap from the walls.

But it’s parts of the show less obviously focused on masterpiece displays that most interest me, because they seem to bring us — this is fanciful, I know — closer to an artist who, though tight-lipped about personal information, has consistently embedded his art with autobiographical data and personal emotion that can be traced through “Mind/Mirror.”

Some facts of his life are well known. He was born in 1930 in Georgia, and grew up in South Carolina. After his parents divorced, when he was 2, he lived on and off with his mother, but mostly with grandparents and an aunt. After a year or so of college, he moved to New York City with ambitions to be an artist.

An Army stint during the Korean War took him to Japan, where he would later return. In 1954, he was back in New York, and there he met Robert Rauschenberg, five years his senior and already an art-world star in the making. They lived together as lovers in Lower Manhattan, and hung out with another male couple, John Cage and Merce Cunningham. It was at this time that Johns produced his first American flag painting — owned by MoMA, it opens the Philadelphia half of the show — and made history.

In the context of New York art of the time, dominated by Abstract Expressionism, the picture was radical. Realistic, impersonal, populist, inherently political, it was everything, or a lot, that AbEx was not. Paintings of other “found” images emerged from Johns’s studio: targets, United States maps, and stencil-style numbers from 0 to 9.

The exhibition rightfully gives them good play. The Whitney devotes a large gallery entirely to flags and maps in varying sizes and media, and of different dates, from the 1950s to the 2000s. Philadelphia follows the same model in a gallery called “Numbers.” In addition to celebrating formal variety and conceptual subtlety, the parallel installations establish the idea of the eternal return of images in Johns’s art. Like memories and emotions, they keep coming back, with different weights and meanings at different times and in different contexts, always the same, never the same.

When Johns’s flags first appeared, though, what they changed forever was American art. They made gestural abstraction begin to look operatic and sappy and uncool. Their tightrope walk between depicting flags and actually being flags threw the art-life divide, and values attached to it, into crisis, a little the way NFTs do today.

And while the flag paintings’ inexpressive, deadpan air was, for some viewers, an existential problem, for others it was a solution. Expressively, emotionally, these paintings seem to give nothing away; indeed, seemed to have nothing to give. And when the art historian Moira Roth wrote of certain art produced during the 1950s — an era of repressive politics and rampant homophobia — as representing a self-protective “aesthetic of indifference,” she was talking about art like Johns’s. Viewed in the light of this show, even this earliest work is tinged with emotion — anxiety, if not active fear.

And anyway, banishing feelings from art, if the feelings were strong, could only last so long. In 1961, Rauschenberg left Johns for someone else and Johns, the vaunted anti-expressionist, brought anguish and anger to his work. Many of the paintings he produced that year and the next were in shades of gray, and their expressive titles were unmistakably personal. “Liar” is stenciled across the top of a dour 1961 painting at the Whitney. Another, titled “Painting Bitten by a Man,” is scarred with tooth marks. A third, “Fool’s House,” in Philadelphia, has a broom attached, as if to make a clean sweep.

And it can be no coincidence that several works from this time refer to gay cultural figures. The large, dark 1962-63 work in charcoal and paint on paper called “Diver,” one of Johns’s most beautiful works in any medium, is a homage to the poet Hart Crane, who jumped to his death from a ship after being caught cruising a sailor. (The Lower Manhattan building where Johns and Rauschenberg lived had views of Brooklyn Heights, where Crane once lived.)

Another elegiac 1961 picture, “In Memory of My Feelings — Frank O’Hara,” takes its title from a lament on lost love by a gay poet who was a friend of Johns and an art-world fellow traveler. This picture appears at the Whitney in one of the retrospective’s most overtly biographical installations, titled “South Carolina.” After the breakup with Rauschenberg, Johns retreated to a beach house in his home state, and there his work began to lighten up, as evidenced by the 1964 “Studio,” a mural-like painting that incorporates a full-size imprint of a screen door, an image of a palmetto frond, a brush and a string of paint-spattered beer cans — real ones — dangling from its surface.

The corresponding installation in Philadelphia documents another important place in Johns’s life and art, Japan, where he traveled in 1964 and where, thanks to artists he met there, his interest in printmaking intensified. One of his most celebrated assemblage paintings, “Watchman,” from 1964, is a centerpiece of this gallery, along with two works that incorporate a photograph of the artist, the only one that appears in his art. But the real glory is a selection of abstract prints Johns made between 1977 and 1995 with Japanese artists in Tokyo and New York (he is seen in action in an accompanying film by Katy Martin).

These prints, composed of unstable patterns of crosshatched parallel lines, are collectively titled “Usuyuki” or “light snow,” the name of an 18th-century Kabuki play that Johns has described as being about “the fleeting quality of beauty in the world.” Awareness of that reality has always been part of his art, and is especially pronounced in his late art, which is the work I’ve come to love most, precisely because it’s not arcane or hermetic; it’s fully felt and reality-grounded.

I’m talking about paintings like the 1982 “Perilous Night,” named for a Cage composition, hung with casts of bruised arms, and made on the eve of AIDS. I’m thinking of “The Seasons” (1985-86), a series about delight in the world, memory, and clocks running down. (Johns appears as a blank gray shadow in each picture.) I’m thinking of the “Catenary” paintings of the late 1990s, each with a string draped on its surface, an emblem of gravity at work, perhaps a thread of life. And I’m thinking of the images of vaudevillian skeletons, and a weeping soldier, and spiral nebulae that have preoccupied the artist of late.

And I’m thinking of the idea, suggested by this show, that artists are mirrored in their art. True? For years Johns has told us we wouldn’t find him there, or at least he wouldn’t tell us how we could. Maybe that was part of his reception problem. Critics, like most people, resent being told you have information they can’t know, because you won’t share it. I think the problem is over now. Partly this is because Johns seems to have become more open over time. (There’s a biography, by Deborah Solomon, in the works.) And partly because, as the retrospective demonstrates, his recent work feels easily accessible.

Or maybe it’s just the way I’ve come to approach it, and him. I’ll let art historians sort out his formal achievements, which, especially considering he’s mostly self-taught, are protean. I’ll let them tally up lists of the artists who have influenced him and those he has influenced. (The second list will require the services of a research firm.) I’ll rely on them to solve the problems, and answer the riddles he’s set, or try.

And basically, I’ll stay with the impression I had, as I walked through the shows in Philadelphia and New York, that I was perusing a rigorous but passionate personal diary, a six-decade record of work, need, love, anger, renewal, sweat, fear, and resolve. It’s being recorded by an artist who, particularly over the past quarter century, has, in his art, consistently mapped the psychological terrain of aging, and who, in his present work, takes the position of a deer standing in the path of oncoming headlights — distant at first, coming closer, almost here — and holds his ground and stares them down.

This vast retrospective, in two parts, opens Sept. 29 and runs through Feb. 13 at two museums.