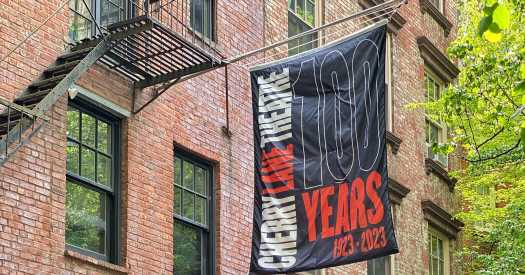 The Cherry Lane Theater, the oldest continuously running Off Broadway theater in New York City, has been sold to the Lucille Lortel Theater Foundation for $11 million, the theater announced on Monday.

“It has been a great run,” Angelina Fiordellisi, the executive director of the theater, said in a statement. “To stand on the stage where so many of our greatest artists, crews and theater providers have stood is to know what theater history feels like.”

The new owner will be George Forbes, executive director of the Lucille Lortel Theater Foundation, which is a few blocks from the Cherry Lane Theater on Christopher Street and has managed the building for the past decade. The sale includes the 179-seat main stage and a 60-seat studio theater.

Fiordellisi, who has led the 97-year-old nonprofit theater since acquiring the building in 1996, will continue to lead the nonprofit producing group Cherry Lane Alternative, which will have readings — and possibly productions — in the theater’s studio space.

She had previously announced plans to sell the building, at 38 Commerce Street, in 2010, citing financial struggles. At the time, she told The New York Times that the theater was operating at a deficit of $250,000, which she attributed to a steep drop in income from government and foundation support, ticket sales and rental fees.

“It’s frightening to me, what’s happened to Off Broadway theater,” Fiordellisi told The Times in 2010. “We have to adhere to the formula of having a film star in our productions to sell tickets because it’s so financially prohibitive. I don’t want to do theater like that.”

But eight months later, she reversed her decision because of a significantly reduced deficit, a new managing agent and the support of the theater’s neighbors. Cherry Lane Alternative, the resident theater company Fiordellisi established in 1997, currently has a deficit of $100,000, a spokesman for the theater, Sam Rudy, said.

The theater, a Greenwich Village institution that has long been a testing ground for new work by emerging artists, reopened at full capacity last month with Jacqueline Novak’s “Get on Your Knees,” a comedy that offers a personal and intellectual history of oral sex. It is scheduled to run through July 31.

Under Fiordellisi, Cherry Lane has mentored writers including Katori Hall, who won this year’s Pulitzer Prize for Drama for “The Hot Wing King”; Antoinette Chinonye Nwandu, whose play “Pass Over” will begin previews on Broadway in August after being produced at the theater in 2016; and Jocelyn Bioh, whose “Merry Wives,” a contemporary take on Shakespeare’s “The Merry Wives of Windsor,” is running at the Delacorte Theater in Central Park.

Cherry Lane was started by a group of artists who were colleagues of Edna St. Vincent Millay and has showcased work by Samuel Beckett, F. Scott Fitzgerald, Eugene O’Neill and Tennessee Williams. But despite its storied history, the theater had not staged a play in two years when Fiordellisi bought it for $1.7 million in 1996 and renovated it for $3 million.

Cherry Lane Alternative, the nonprofit producing group, said it expects to resume a scaled-back version of its acclaimed Mentor Project, which pairs emerging writers with established playwrights like Lynn Nottage, Branden Jacobs-Jenkins and Taylor Mac to develop and stage their work in the studio theater space. It will likely include one production per season instead of the typical three.