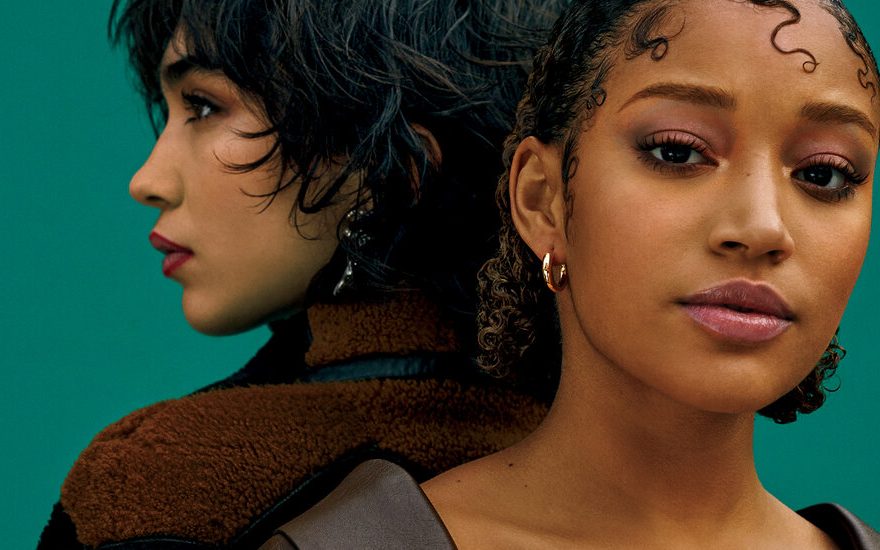 Friends Who Became Adults Together

Two actresses who met in childhood and have leaned on each other ever since.

Amandla Stenberg: I remember the first time we met. I was 11 and Rowan was about 9. We were at an event for child actors, and a designer had collaborated with both of us to make our dream dresses — I wore a lace piece with studs, and Rowan had on a little blue-and-pink pirate dress — so we ended up taking a picture together. I met a lot of other young performers at events, and there were weird semblances of friendships, but they were always supposed to be these public things. Rowan and I have found something much more substantial beyond that.

There was an interesting cultural moment happening around 2014 or so, when we were still child actors. We already had public social platforms, which was a privilege, and it felt natural to both of us at that age to use them for good and speak about the things that mattered to us, like gender, race and sexuality. Because of that particular moment and what we were interested in, they became easily politicized. We were expected to have authoritative voices when we hadn’t really had the opportunity to become adults. It feels less important to me now to use that forum to speak to the things I care about. I’m more interested in exploring those concepts interpersonally, which inherently means within my queer community and community of color — groups that represent safety, freedom and the ability to just show up as you are.

Now, Rowan and I co-parent each other: We force each other to do the things we need a parent to tell us to do. I’ll be like, “Girl, you just need a therapist,” and I’m constantly reorganizing her chargers. We hold it down for one another. And Rowan is always encouraging me to be more confident. She makes me feel like a million bucks.

Rowan Blanchard: On the night we met, the actor who played Cory on the show “Cory in the House” presented an award and said both of our names wrong. I feel that ever since then, Amandla and I have been in each other’s mind, and we remind each other of all those little things. In the past few years, we’ve established a friend group that feels like a family, which has been very formative for me. When I was younger, having that — and I hate this phrase — “queer visibility” in my relationships meant I didn’t have to rely solely on being supported and informed online. It made me realize that a nurturing community can exist as a tangible thing, rather than just a concept. I worry about the way the internet can become about performing what you believe. For me, what is special about our friend group is that we are all having those conversations in real life.