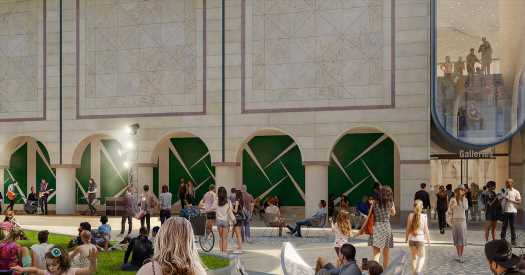 The Blanton Museum of Art at the University of Texas at Austin is planning a $35 million campus redesign led by the firm Snohetta. It will feature architectural and landscaping improvements throughout the museum’s 200,000-square-foot grounds like a dramatic biomorphic canopy redefining the entrance plaza as well as a public mural commission by the Cuban-American painter Carmen Herrera.

“People have had a hard time finding our front door at times and identifying us driving by,” said the Blanton’s director, Simone Wicha, who is looking to enhance the sense of arrival for the museum’s two facing Spanish revival-style buildings, which blend in with the overall architectural look of the university.

With more than $33 million raised, the museum will break ground in February and expects to complete the project in late 2022.

Snohetta has designed 15 tall, flowering structures to bridge the patio between the two buildings, to give the museum a more distinctive visual identity. Rising on slender columns and fanning into broad petals, these canopies will meet to form archways and provide shade over new seating. This ensemble will also frame views of the Texas Capitol in one direction and Ellsworth Kelly’s nondemoninational chapel, which was realized in 2018 on the Blanton campus.

The Blanton invited Herrera, now 105, to create a mural prominently visible through the arches of the gallery building’s facade — the first of several public artworks it will commission. The museum is looking to build on the interest in Kelly’s chapel, which, Wicha said, has put the museum on the international art-world map and helped increase attendance to 200,000 visitors annually before the pandemic set in, up from about 135,000.

Herrera’s bold composition of 14 monumental green squares, each animated with four white diagonal spears that meet to define a smaller tumbling green square, will be titled “Green How I Desire You Green” after a refrain in Federico García Lorca’s poem “Sleepwalking Ballad.”

“The opportunity to do something in such a grand scale and in a site of such importance was very appealing, especially to the hidden architect in me,” Herrera, who trained as an architect in her 20s before leaving Cuba, wrote in an email. She noted that the Blanton was a pioneer in collecting Latin American art.

Although she and Kelly were both in Paris from 1948 to 1954 and thereafter in New York, they did not know each other. “I worked mainly in solitude for many years,” wrote Herrera, whose art-world recognition has come in the last two decades, including a retrospective at the Whitney Museum in 2016. “I am proud that at this stage in my life our large-scale projects will be shown together at the Blanton.”