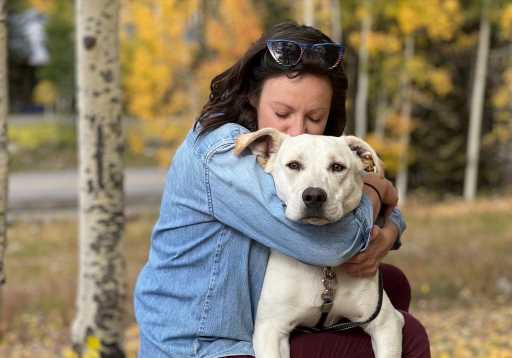 Editor’s note: Each week in Staff Favorites, we offer our opinions on the best that Colorado has to offer for dining, shopping, entertainment, outdoor activities and more. (We’ll also let you in on some hidden gems).

The American Society for the Prevention of Cruelty to Animals estimates one in five households have brought home a dog or cat since the start of the COVID-19 pandemic. Count me among the newly initiated puppy parents whose life is now filled with heart-warming snuggles and never-ending messes, and whose camera roll is overflowing with “baby” pictures.

In April, my husband and I adopted Ambassador Woodford Longfellow, a.k.a. Woody, so named because he is a Basset Hound and Labrador mix. The extra long body and large paws are what give him a unique look. (Shoutout to the Second Chance Humane Society in Ridgway, where we found him.)

This is my first time raising a puppy and damn if it isn’t hard work. Here are four items that make my life a little bit easier, from fashion to function, plus my favorite local place to shop for food and more.

Let’s start with fashion. Rocky Mountain Hound is a dog accessory company based on the Western Slope that I discovered at the Ridgway Farmers Market. One look at their bandanas, which slip onto a dog collar instead of being tied around the animal’s neck, and I was sold. Better still, they are reversible with patterns on both sides. I also couldn’t resist buying Woody a similarly designed bow tie ($8), which he wears on special occasions.

Rocky Mountain Hound sells other accessories such as collars, leashes, treats and paw balm, as well as a selection in holiday themes, so you can deck the dogs this season.

Woody is 52 pounds of pure muscle and incessantly energetic — a combination that’s led to more than my fair share of bruises. One of the worst came when he was on a retractable leash and tried to chase something, painfully wrapping up my legs in the process.

That’s when we invested in Ruffwear’s Roamer Bungee Leash ($39.95), a soft elastic leash that lets Woody venture in the spirit of a retractable leash but without the sturdiness that caused my 6-inch bruise. Unlike a traditional leash, the handle can be expanded large enough to fit around a waist, so humans can hike with their pups hands-free.

Woody is still a good boy in training, so he pulls quite a bit when on the leash. But recently we bought the PetSafe Gentle Leader, a fabric collar that goes around his head and attaches to the leash to prevent him from using his body weight to pull, and it’s been a game-changer. He can no longer pull when he sees rabbits run by or when he gets excited. Walks are now fun for everyone involved (read: me), and in fact,he behaves exceptionally when wearing the gentle leader because he knows he has no other choice.

I empathize with parents who have human children every time I need to pack the doggy diaper bag for a road trip or other adventure. One way I’ve cut down on the number of supplies is by buying a dog water bottle that is also a bowl. Specifically, the Lesotc Pet Water Bottle ($16.97), which has a soft polyethylene top that folds up into a bowl and fills when you twist its latch to “open” and squeeze the bottle. It also cuts down on waste because when Woody doesn’t drink the whole bowl, the remaining water gets suctioned back into the bottle.

I always feel good about supporting a local store, especially when it happens to be the best in town at its specialty. Chow Down Pet Supplies boasts five locations in Colorado, each with its own personality but the same commitment to selling quality pet food and products. I shop at the one in Montrose where the friendly staff are always willing to help me size new gear for Woody (such as the gentle leader) and send me home with samples of new products. When I first moved to the Western Slope and was changing my cats’ food, they provided me with mini bags of several options that are eligible for discounts under the store’s loyalty program. That the store also has some resident cats soliciting scratches from customers is an added bonus.