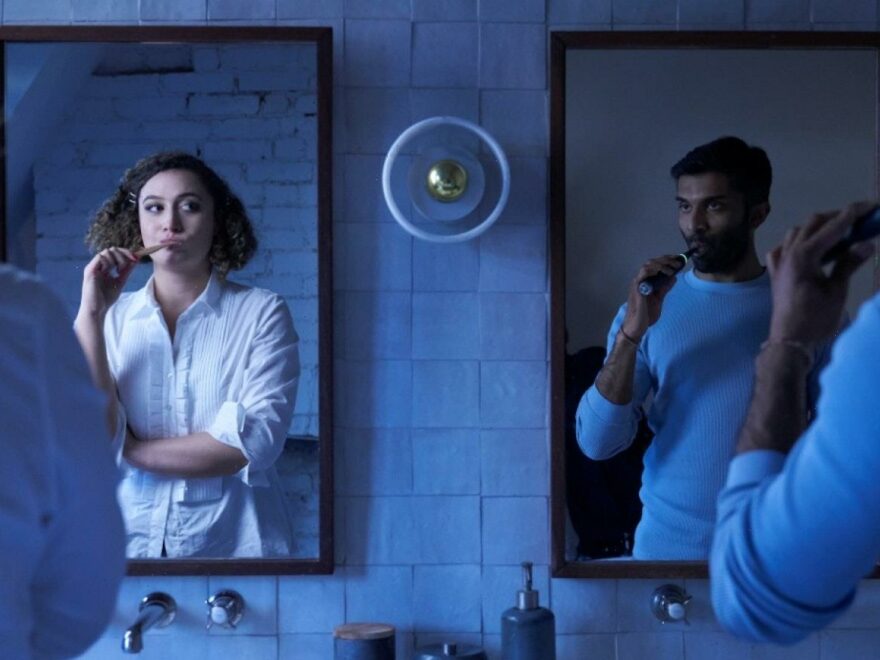 Rose Matafeo’s Starstruck is coming back to BBC Three next month and now, an exciting first look image has been released. Here’s everything we know about the second series of the hit comedy so far.

BBC Three really has brought us the goods over the years, from the critically-acclaimed adaptation of Sally Rooney’s Normal People to make-up reality show Glow Up, the channel’s return as a broadcasting channel is a long-awaited move that will see some of our favourite shows get primetime air time.

The excitement was very real last year when the channel announced four new women-led comedy shows including Rose Matafeo’s Starstruck. The critically acclaimed series was streamed almost five million times on BBC iPlayer, making it the channel’s biggest new comedy of 2021. So, of course, fans were ecstatic to learn that the hit comedy was getting a second series.

Now, we finally have our first look at the upcoming second season in a mysterious first look image. It shows Jessie (Matafeo) and Tom (Nikesh Patel) staring at each other while brushing their teeth in a shared bathroom. The image of modern romance, perhaps? We’re not entirely sure but we do know, though, that our excitement has notched up tenfold and we cannot wait for the series to return next month.

BBC Three is returning to TV: from I May Destroy You to Fleabag, these are the best series to stream

The six-part series is a modern romcom that made one writer (that’s me!) believe in romance again. It follows the story of Jessie (Matafeo), a millennial woman living in east London and juggling two part-time jobs. On New Year’s Eve, she finds herself in a rather unusual ‘morning-after-the-night-before’ type situation when she realises that she slept with a famous film star called Tom (played by Nikesh Patel). What ensues is a year of  ‘will they? won’t they?’ between the two…

It’s funny. It’s a bit farfetched. It’s a light, refreshing tonic. It’s unashamedly a modern romcom. And it’s the series that a lot of women have whizzed through since its release. If you’re one of them, you’ll be delighted to hear that the second season will be coming to our screens next month.

The comedian and writer shared a photo on Instagram last year, which shows her holding a ’Starstruck 2’ clapperboard.

“Thank you for your truly lovely words about Starstruck so far,” she wrote in the caption. “I’m sorry if I haven’t replied, but we started shooting something else this week.”

BBC Three’s Starstruck: “Why the final scene of this new romcom has made me excited about dating again”

So, what could happen in the second season?

The second six-part series is set to continue the story of Jessie (Matafeo) as she navigates the complications of becoming romantically involved with famous film star Tom (Patel).

The synopsis reads: “After having decided to stay and pursue a relationship with him, Jessie must deal with the real-world consequences of her grand gesture.”

Minnie Driver (Modern Love) is set to reprise her role as Tom’s agent Cath, while Russell Tovey (Years And Years) joins the cast for the brand new series. It really could go in any direction and that is the beauty of a modern romcom – it understands that not all romances need to have a neat ending. But, whatever happens, we know it will be funny and smart, and will sweep us off our feet.

While an exact release date is yet to be announced, we do know that we don’t have long to wait for the second series of Starstruck. It will be returning on BBC Three next month so watch this space for updates.