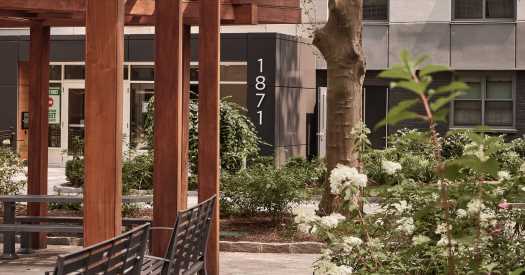 Sandra Gross remembers moving in the 1990s into Baychester Houses in the Bronx. She gasped at her new sunny apartment and the flowers outside. “I wanted to kiss the ground, it was so beautiful,” she told me.

But like so many other public housing projects in the city, Baychester deteriorated. Gross tried rallying her neighbors, lobbying officials for help. Conditions only got worse.

Then, a few years ago, the rumors started.

“We heard seniors would be forced out, rents would go up,” Gross said. “I was not going to let that happen.”

By “that,” she meant letting the New York City Housing Authority hand over the project to private developers. Gross is the longtime president of the Baychester tenants’ association. Word was that NYCHA, having failed for decades to maintain the property, wanted to “privatize” it. For residents fearful of displacement, accustomed to disappointment and broken promises, the only thing that seemed worse than NYCHA was “not NYCHA,” as Gross put it.

With parks, prisons, subsidized housing, and much else, America during the last half century has undergone a quiet revolution, privatizing, through tax incentives, qualitative easing, deregulation and other means, many aspects of what had once been regarded as responsibilities of the public sector. Resulting gains in efficiency and cost-savings have gone hand-in-hand with escalating inequities, the unaffordability of homes in many areas of the country and, according to a recent study, record housing shortages.

Privatization has become a trigger word and a rallying cry for activists and politicians, not to mention opportunists, at both ends of the ideological spectrum, inflaming the Twittersphere and often obscuring what may be a nuanced and complicated reality for vulnerable populations like Gross and her fellow public housing residents.

It turns out what was happening at Baychester was “a miracle and a blessing,” according to Gross. We got together one recent rainy morning in the community room that doubles as her office. Joining us was Walter McNeil, tenant association president at Edenwald Houses, the Bronx’s largest public housing development, a 1950s-era complex of 40 brick towers with more than 2,000 apartments, housing over 5,000 residents.

McNeil told me a similar story about his arrival at Edenwald more than four decades ago, when he moved with his young family from Harlem into what seemed to him like a step up “in the suburbs.” Edenwald’s residents back then were a mix of Black and white, he said, and NYCHA ran the project efficiently. Edenwald now occupies 49 scruffy acres just across the street from Baychester, which is small only by comparison: 11 buildings, 441 apartments, a couple of thousand residents.

Side by side, the two projects make a textbook before-and-after comparison, one derelict, the other refurbished. I visited Baychester and spoke with McNeil and Gross last winter, at the tail end of that project’s 24-month-long makeover by a team of private developers. I returned in July to see the upshot.

Built more than half a century ago, Baychester was never properly waterproofed, its buildings enduring a history of cracked and spalled masonry and deteriorated mortar joints. Gross would complain to housing officials about mold sickening neighbors. They suggested tenants try bleach, she said. A few years ago, NYCHA shut down its on-site management office, forcing residents, many of them seniors, to pony up for transportation to meet the people supposedly in charge of the property. Security was half a dozen cameras, frequently broken, sporadically manned.

Today the campus looks spotless, with refurbished playgrounds, fresh plantings and a new basketball court. The buildings have been reclad with a waterproof material and faux-wood paneling. The renovation is not Architecture with a capital A. But it is dignified and better than some market rate housing. Glassed-in entrances have replaced the old carceral doorways. There are new lobbies, new light fixtures in the hallways, new recycling rooms and compactors in the basements. Apartments have been outfitted with new bathroom fixtures, windows and kitchen appliances. Gross told me that her apartment renovation lasted a couple of days and she never had to move. The new managers, after consulting with tenants about their desires, brought in a GrowNYC farmers market. Staff now patrols the grounds 24/7, with hundreds of security cameras replacing the broken ones.

“People feel safe, and my tenant meetings have started getting busier,” Gross said. “Nobody used to show up under NYCHA, but now they’re engaged.”

Devised by the United States Department of Housing and Urban Development during the Obama administration to deal with the mountain of capital debts housing authorities faced, RAD, in effect, is a financial instrument. It unlocks, through Section 8 vouchers, access to bank loans and other reliable, long-term streams of money that had not previously been available to housing authorities.

RAD teams the authorities up with independent operators who can then assume responsibility for fixing and managing public housing properties. The vouchers, backed by the government, guarantee private operators a fixed stream of income, so it’s good business for them. They assume financial and other burdens, which in turn puts housing authorities, chronically underfunded and freighted by bureaucracy, on a more secure footing.

In the case of Baychester, for example, NYCHA was spending $14,000 a year per apartment, pouring cash into deteriorating properties. The new managers are spending $9,000 per apartment. Their costs are lower because moldy, leaky buildings have been upgraded to meet current energy standards and they require less maintenance.

So far NYCHA has completed or is undertaking RAD conversions at just a handful of its hundreds of sites. Jonathan Gouveia is executive vice president for real estate development for NYCHA. At projects like Baychester, he told me, NYCHA becomes, in effect, a “regulating and oversight body to protect resident rights,” with the partnerships structured so that NYCHA can replace the private teams if they’re not doing a good job.

What can’t change, contrary to the rumors, is the affordability of apartments. Public housing tenants — those complying with lease agreements and income certification requirements — will continue to pay no more than 30 percent of their income. Private managers receive the same amount in housing vouchers regardless of who lives in these apartments, so they have no financial incentive to evict residents except those who fail to pay rent. They are expected to relocate single tenants occupying, say, three-bedroom apartments, to smaller units, freeing up more room for families — “right sizing” is the common jargon — a contentious responsibility NYCHA had mostly abandoned. When a vacancy arises, NYCHA officials, not the private operators, decide who moves in.

And no apartments can be converted to market rate.

According to information I requested from NYCHA, there were as many evictions during the four years leading up to Ocean Bay’s conversion (48) as there were during the four years afterward. “There are examples across the country where RAD has not worked out well,” said Vicki L. Been, New York’s deputy mayor for housing and economic development. “That’s why New York was cautious to adopt it at first. And it’s not right for all of NYCHA. We have buildings where we face the challenge of relocation, for example — buildings where we have to do extensive lead removal.”

But public-private partnerships, done properly, vigilantly overseen by city officials, at appropriate sites like Baychester, can work. “Why wouldn’t NYCHA residents be suspicious after generations of mistreatment?” Been allows. “At the same time, the notion that we should just wait and let things further deteriorate while we debate if this is privatization or hope for enough public money to make the repairs — I can’t tell you how many times I have heard elected officials promise public housing residents, ‘We’re going to get you the money.’ Then it never arrives.”

I reached out to RAD skeptics like Robert Hall, president of the residents’ association at the Gun Hill Houses in the Bronx. He criticized RAD as a “perverse kind of privatization” and recounted a history of failures by the housing authority. Instead of RAD, he told me, New York should look for salvation in the infrastructure bill — which, even in President Biden’s $3 trillion version, wouldn’t begin to address NYCHA capital costs that now approximate the gross domestic product of Bahrain. Clearly NYCHA has been terrible at communicating how RAD works. And some local leaders and community organizations have spread dubious information about selling off public housing that alarms residents. Should the richest nation on earth build and run a great public housing system? Yes. And America should also establish a universal right to housing. But in the meantime hundreds of thousands of NYCHA tenants continue to wait for improvements.

Eric Adams, the Democratic nominee for mayor, has yet to weigh in on extending NYCHA’s involvement with RAD. He, or whoever replaces Mayor de Blasio, would do well to pursue it where it could bring similar changes. The city desperately needs more subsidized apartments along with offices, services and grocery stores on public housing campuses where residents would benefit from equitably minded infill.

I have seen clever proposals, like a plan by a Brooklyn architecture firm, Peterson Rich Office, which knits new housing into existing projects and the surrounding streetscape. Tenant leaders in the South Bronx loved the Peterson Rich idea, according to one of the architects, Miriam Peterson, when they were briefed on it recently, but they oppose a voucher conversion program unlocking the funds needed to make possible these major sorts of upgrades.

“Seeing is believing,” as McNeil, the tenant president at Edenwald, put it. “Neighbors saw Baychester before the renovation, and we see it now. We want the same chance.”

So Edenwald signed onto RAD. The residents will learn any day now which team of developers NYCHA has chosen for the conversion.