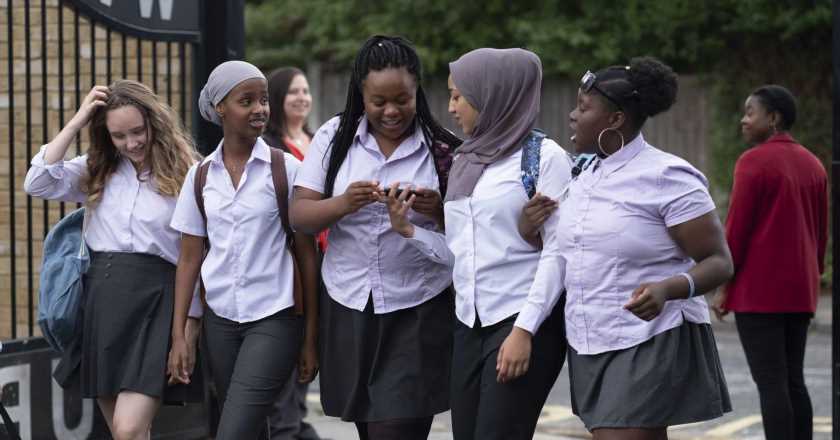 From Rocks to Hairspray, we will never fall out of love with these high school movies.

Early autumn is upon us and, while the cold weather won’t set in for a while yet, there’s still an exciting, start-of-term nip in the air.

That’s right: we might not be at school anymore, but there’s something about that clean-slate September feeling that still makes us feel as if we’re on the cusp of a new beginning. And what better way to celebrate all of that energy and momentum, then, than by indulging in some of the best high school movies ever made?

From old classics (hey there, Grease) to exciting new favourites like Booksmart and Rocks, there’s something here for everyone. Fair warning, though: every film on this list is brimming with back-to-school spirit, so you may find yourself feeling inspired to shoot for the stars and establish new routines that lead to the kind of life you want.

Grease is an absolute back-to-school classic.

It’s been decades, but Grease remains the word for many fans, primarily because it’s got groove, it’s got meaning, and it’s got 30-somethings dressed up as high school kids.

Throw in some toe-tapping tunes and the Pink Ladies – who vow to “act cool, look cool, be cool, til’ death do us part” – and you have a recipe for pure nostalgic fun. Just try not to think too deeply about the problematic romance at the film’s centre, yeah?

Rocks is filled to the brim with teenage girl power. And, despite taking a very realistic approach to the perils faced by young women today, this critically acclaimed coming-of-age movie is guaranteed to leave you feeling uplifted and hopeful for a brighter future, too.

This coming-of-age comedy follows Emma Stone’s Olive Penderghast as she takes advantage of her school’s rampant rumour mill to build a new identity for herself and increase her social standing. And, as if that weren’t enough to tempt you in, how’s about the fact that Stanley Tucci plays Olive’s normal, authentic, and lovely dad?

Yeah, we thought as much.

To All the Boys I’ve Loved Before

Peter Kavinsky and Lara Jean Covey are star-crossed lovers in To All The Boys I’ve Loved Before.

When her secret love letters somehow get mailed to each of her five crushes, Lana Condor’s Lara Jean finds her quiet high school existence turned upside down. And, for those who fall in love with this story about… well, about love, both of the sugary-sweet sequels are streaming on Netflix, too.

Based on the Jennifer Mathieu book of the same name, Moxie tells the story of girl from a small town who, inspired by her mother’s Riot Grrrl past, starts a feminist revolution at her high school.

Autumn TV: 30 brilliant new TV shows to get stuck into this season

Jenna Rink (Jennifer Garner) makes an unusual wish on her birthday. Miraculously, her wish comes true and the 13-year-old Jenna wakes up the next day as a “30, flirty, and thriving woman”…much to her dismay.

The first Saudi Arabian-produced film ever to be directed by a woman, Haifaa Al-Mansour, Wadjda tells the story of a rebellious Saudi girl, who enters a school competition solely so that she can win enough money to buy her own bicycle.

One of the most quotable movies of this century, Mean Girls sees Lindsay Lohan’s Cady join a new high school and join a band of misfits to launch an offensive against ‘the Plastics,’ aka teen royalty and the most popular girls in school. As time goes by, though, Cady finds that she’s become an integral part of the group she set out to bring down – but has she become too much of a “mean girl” to ever come back?

The 9 best and most important teen movies, as ranked by Stylist

This 1986 movie, all about a teenage boy (Matthew Broderick) skipping school so he can make the most of a glorious summer’s day in Chicago, has it all. Think car chases, mistaken identity gags, romantic kisses in front of famous artworks, musical numbers, and plenty of visual humour.

Throw in a standout appearance from Dirty Dancing’s Jennifer Grey and lots of breaking the fourth wall, and you have a recipe for pure nostalgic fun.

Set in 1980s California, this is primarily a film about female ambition and a young woman’s desire to become a professional basketball player. It also, though, includes one of the most talked-about sex scenes in movie history – and that’s largely due to its heavy focus on the female gaze.

The first mainstream studio film with a gay lead, Love, Simon – starring Nick Robinson – charts teenager Simon Spier’s inspiring journey, from keeping his sexuality a secret from his friends and family, to finally coming out.

Romantic films on Netflix: the best romcom movies to stream in 2021

Inspired by Jane Austen’s Emma, Clueless tells the tale of Cher, a rich high-school student who takes it upon herself to help a new student gain popularity. And, in the process, she unexpectedly discovers that she has feelings for someone very close to her…

Easily one of the most joyful movie musicals ever made, this star-studded romp takes us back to 1960s Baltimore, where a rebellious teenager takes a stand against racism and discrimination – all while dancing her bouffant off.

10 Things I Hate About You

Based on Shakespeare’s Taming Of The Shrew, this high school romcom sees a lovestruck teen –unable to date his beloved until her older sister has a boyfriend –pay a mysterious teenager to woo the anti-social sibling. And, as you probably guessed from the sheer chemistry between Julia Stiles and Heath Ledger, it’s a deal that leads to unexpected sparks flying everywhere.

The 00s coming-of-age movie that made us all wonder if we might secretly be a) royalty or b) related to Julie Andrews, The Princess Diaries sees Anne Hathaway’s Mia Thermopolis discover that she is the princess of Genovia. Will she be able to prove to her grandmother that she is worthy of her title, though?

The Hate U Give

Starr Carter (Amandla Stenberg) is constantly switching between two worlds: the poor, mostly Black, neighbourhood where she lives and the rich, mostly white, prep school she attends. When Starr witnesses the fatal shooting of her childhood best friend at the hands of a police officer, though, the uneasy balance between these worlds is shattered – and Starr must find the strength to speak up for what’s right.

In this quirky dark comedy, Reese Witherspoon’s Tracy runs unopposed for her high school election – until, that is, the varsity’s popular football player decides to throw his name into the ring, too. Cue absolute chaos.

Greta Gerwig’s moving and gloriously funny Lady Bird is all about growing up, mother-daughter relationships and the anxiety of separation. And, yes, there’s a reason it has a near-perfect score on Rotten Tomatoes.

Booksmart is an absolute treat of a movie.

Booksmart, starring Beanie Feldstein and Kaitlyn Dever, takes a brave and hilarious look at teenage sexuality through an LGBT+ perspective. And, in the process, it gives us a fiercely funny and seriously unforgettable high school movie, too.

This musical comedy-drama takes us back to 1980s Dublin, where the ongoing recession sees Conor (Ferdia Walsh-Peelo) forced to move from his private school to a tough inner-city alternative. As he tries to adjust to a new way of life – and impress the girl of his dreams, of course – he decides to start his own band, resulting in the sort of toe-tapping tunes that burrow into your brain and lay eggs there. We swear it.

Is 2021 the ultimate year for musicals? Here are all the top singalong films you have to see this year

Heathers sees the disenchanted Veronica (Winona Ryder) and her rebellious boyfriend J.D. (Christian Slater) decide to confront the sexual taboos, bullying teens, and the social order of their high school. As things quickly spiral out of control, though, it’s not long before the plot takes a very dark twist indeed; think murder, blackmail, and falsified suicides – all wrapped up with a plethora of covetable knee-length plaid skirts, blazers with shoulder pads that could take your eye out, oversized hairdos and scrunchies.

Starring Tom Holland and Zendaya, this Marvel movie ticks off so many high school movie tropes as Peter Parker does his best to balance his life as an ordinary student in Queens with his superhero alter-ego, Spider-Man.

This cult cheerleading comedy might be (let’s face facts) formulaic and stereotypical, but there’s no denying that the starry classic is thoroughly entertaining, too. Which probably explains why it’s inspired no fewer than five sequels, eh?

Best horror films: the 33 scariest movies of all time

Written and directed by Rick Famuyiwa, this coming-of-age film sees Malcolm (Shameik Moore) and his friends attend an underground party hosted by a local drug dealer. When the police raid the party, though, the kids escape, unaware that their host has hidden drugs and a gun in his backpack…

An ode to nerdy girls everywhere, Never Been Kissed sees Drew Barrymore’s Josie, a copy editor, go back-to-school for an undercover assignment. But, when she finds herself falling for her English teacher, things start to get complicated. Very complicated.