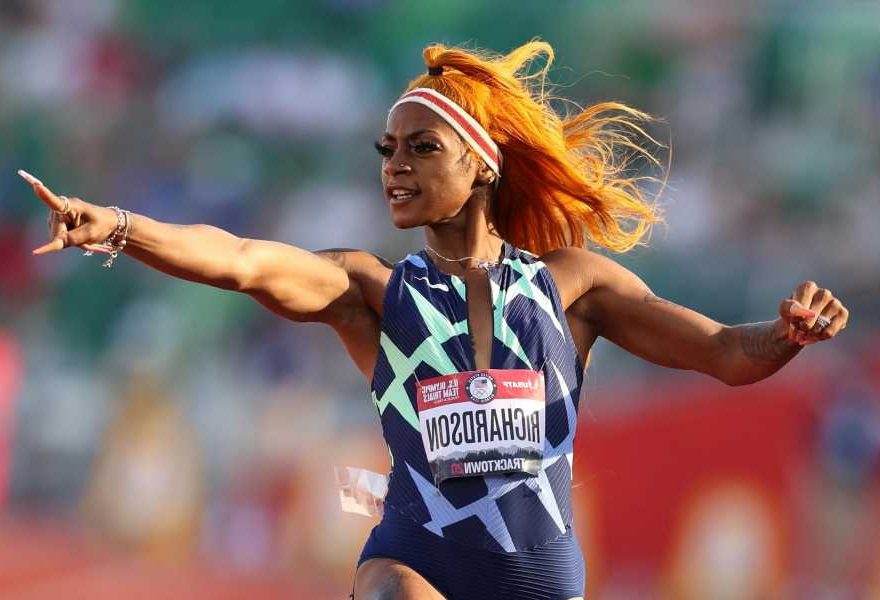 Sha’Carri Richardson, the American track phenomenon widely considered to be a favorite to win the gold medal in the 100-meter dash at the Tokyo Olympics, will no longer be able to compete in the marquee race. The United States Anti-Doping Agency announced on Friday that Richardson tested positive for cannabis, invalidating her 100-meter win in the Olympic trials last month and dashing her chances to compete in the event this summer.

The news is a devastating blow for the U.S. Olympic team, and many have questioned why one of the team’s most charismatic stars will no longer be able to compete in track-and-field’s most prestigious event for something as innocuous as smoking a little weed in Oregon, where — oh, by the way! — the drug is legal.

Meet the Women Bringing Weed to the Deep South

Here’s what we know about Richardson’s positive test, why cannabis use is prohibited among Olympic athletes, and what happens next:

Who is Sha’Carri Richardson?

Richardson, 21, was primed to be one of the breakout stars of the Tokyo Olympics. She won the 100-meter trials in Oregon last month, and did so with a flair that drew comparisons to the stylish sprinting icon Florence Griffith Joyner, who won 100-meter gold in Seoul in 1988, setting the world record that still stands today.

Richardson logged the sixth-fasted time ever recorded in May when she ran a 10.72 during a meet in Florida. Her hair was dyed blue then. It was dyed orange for he win at the trial in Oregon, where she ran a 10.86. She told reporters that she colors her hair “to make sure that I’m visible and being seen.”

Richardson was a star sprinter at Louisiana State University, where as a freshman she won the 2019 NCAA title in the 100 meters. She turned pro after her freshman year, and given her recent performance was widely considered to be the favorite to win 100-meter gold in Tokyo. If she did so, she would have become the first American woman to win the event since Gail Devers did it in Atlanta in 1996.

What are the consequences of Richardson’s positive test?

The most immediate consequence of Richardson’s positive test is that her victory in the 100-meter trial last month has been invalidated, which means she won’t be able to compete in the event in Tokyo. This really sucks.

Richardson could still compete in the Olympics, though. The United States Anti-Doping Agency announced that Richardson has accepted a one-month suspension, retroactive to June 28th. The track-and-field portion of the Olympics begins July 30th, which means Richardson would be eligible for the 4×100-meter relay. USA Track & Field can select up to six athletes to represent the nation in the race. Four of these spots have to go to the top finishers in the 100-meter trial, but Richardson could fill one of the remaining two spots.

USATF released a statement Friday morning, but did not indicate whether they will tap Richardson to compete.

“I’m grateful, but if not, I’m just going to focus on myself,” Richardson said on the Today show when asked about the prospect of running in the relay.

Why would marijuana keep anyone from competing in the Olympics?

The World Anti-Doping Agency’s code notes that “all natural and synthetic cannabinoids” are prohibited in competition. This includes “cannabis (hashish, marijuana) and cannabis products.” The United States Anti-Doping Agency and the United States Olympic & Paralympic Committee have both signed onto the WADA’s code, and thus agree to abide by its rules about prohibited substances.

The New York Times notes that cannabis is banned only during “in-competition periods,” which extend from 11:59 p.m. the day before a competition through to the competition’s conclusion. THC can remain in a person’s system for weeks after use, but following the 2012 London Olympics regulators increased the threshold for a positive test from 15 to 150 nanograms per milliliter of THC in order to ensure that only “competition” use is detected.

Richardson seems to have ingested the weed as the trials were taking place in June. After she won the 100-meter final on June 19th, she told reporters that her biological mother died “last week.” Richards told the Today show on Friday that she used it after she learned about the death of her mother.

The Olympics have had plenty of issues with athletes and drugs, historically. Most famously, Ben Johnson, the Canadian sprinter who set the 100-meter world record en route to winning gold in Seoul in 1988, was later stripped of his medal for testing positive for performance enhancing drugs. Doping issues persist to the present day. American Christian Coleman, the reigning world champion in the men’s 100 meters, is currently serving a two-year suspension for missing drug tests and will not be allowed to compete in the Olympics.

There aren’t many people who will argue cannabis is going to help anyone compete, but the point is that the bodies governing international athletic competition are very, very strict about drug testing.

Wait, though … IS marijuana a performance-enhancing drug?

It is, according to the USADA. In explaining why cannabis is on the prohibited list, the USADA cites a 2011 paper released by WADA that notes cannabis could be performance-enhancing. “Based on current animal and human studies as well as on interviews with athletes and information from the field, cannabis can be performance enhancing for some athletes and sports disciplines,” the paper reads.

The question of what “performance-enhancing” really means remains up for debate. A 2018 study in the Clinical Journal of Sport Medicine found “no evidence for cannabis use as a performance-enhancing drug,” but anecdotally, some athletes disagree. Canadian snowboarder Ross Rebegliat, for instance, who won the first ever snowboarding event in the 1998 Winter Olympics only to be temporarily disqualified for having cannabis in his system, thinks the substance shouldn’t be banned but that it’s performance-enhancing in the way many other choices athletes make can be. “The clothing you wear and the skis and everything you do, including brushing your teeth, is performance enhancing,” he told the CBC in 2018.

Cannabis raises dopamine levels in the brain and has been shown in some cases to have anti-inflammatory properties. The culture of cannabis consumption in elite sports is definitely shifting. In 2016, weed was the second-most widely used drug among athletes, after alcohol, according to a study by the American Academy of Addiction Psychiatry. Its use is most prevalent among athletes who play “high-risk” sports, with an increasing number of these athletes reporting they use it for pain and concussions, according to the Clinical Journal of Sport Medicine study. The same study recommended further research into its potential benefits in these treatment areas.

How has Richardson responded to the positive test?

Richardson appeared on the Today show shortly after the positive test was announced. “I want to take responsibility for my actions,” she said. “I know what I did. I know what I’m suppose to do. I know what I’m allowed not to do. And I still made that decision.”

In explaining the positive test, Richardson cited the death of her biological mother while she was in Oregon for the trials. “It was definitely triggering, it was definitely nerve-shocking,” Richardson said of hearing the news. “It sent me into a state of mind and emotional panic, if anything, knowing that I still have to go out and put on a performance for my dream, to go out there and still compete. I was blinded by emotion, blinded by sadness, blinded by hurting. I knew I couldn’t hide myself, so in some type of way I was trying to hide my pain.”

She added that the pressure of competing to join the Olympic team and the pandemic compounded the stress of her biological mother’s death.

Richardson appeared to know on Thursday that she’d tested positive.