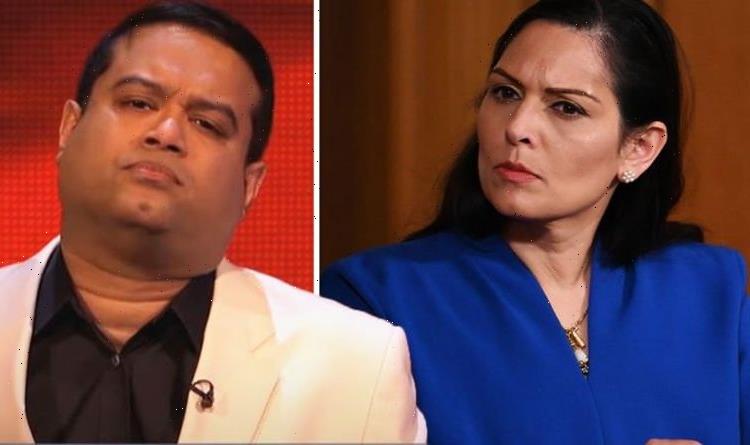 The Chase star Paul Sinha, 51, has taken to Twitter to brand the Home Secretary and Conservative politician Priti Patel, 49, a “hypocrite”. Following England’s victory in the semi-finals of the Euro 2020 championship last night, the Witham representative took to social media in celebration. However, the quizzer has now taken issue with her tweet and said that it was at odds with the remarks that she’d made on sportsmen taking the knee in an interview with GB News last month.

The quizzer reposted the Home Secretary’s original tweet in celebration of England’s win.

Following England’s 4-0 victory over Ukraine in the quarter-finals, Patel took to social media to celebrate.

However, the ITV media personality responded the day after England made it through to the final of the competition.

Following England’s latest win, the Home Secretary once again celebrated the win and faced even more backlash for her post.

The Chase star wasn’t the only one who took issue with the Home Secretary’s tweet.

One social media user wrote: “Luckily you weren’t in charge of the Home Office when the majority of these young men’s parents and grandparents arrived,” alluding to the MP’s stance on the Windrush scandal.

Another added: “Changed your tune, eh? You criticised the team taking the knee some days back.”

Last month the Conservative MP stated that football fans have the right to boo the England football team for “taking the knee” in protest at racism.

She said: “I just don’t support people participating in that type of gesture.”

She had previously described the Black Lives Matter protests as “dreadful” and stated that she did not agree with sportsmen taking the knee ahead of games.

The gesture originated after American footballer Colin Kaepernick knelt during the national anthem ahead of a match five years ago to protest racial injustice and police brutality in the USA.

Over the past few years the statement has become a prominent symbol in sporting matches.

Addressing the statement ahead of the Euro 2020 league, UEFA said: “We urge spectators to show respect for teams and players taking the knee.”

It said “any player who wants to demand equality amongst human beings by taking the knee will be allowed to do so”.

Following England’s 2-1 victory over Denmark last night, the team will play Italy in the final of the Euros 2020 on Sunday night.

The match will be available to watch on BBC and ITV.