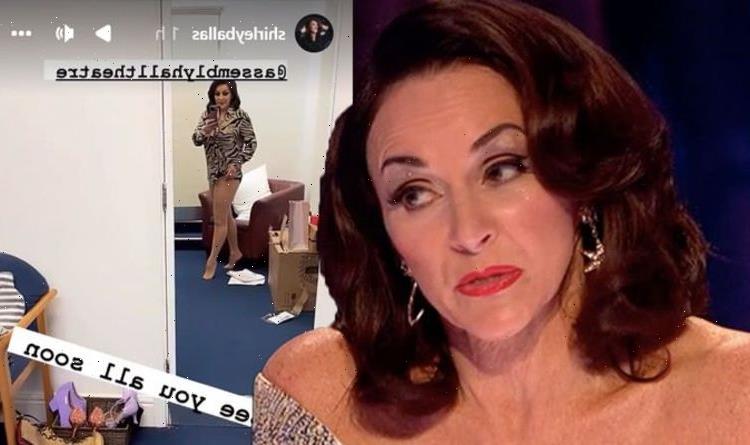 Shirley Ballas, 61, has revealed that she “forgot to put on knickers” before starring as the Wicked Queen in a Snow White and the Seven Dwarfs pantomime. The head Strictly judge took to Instagram in her briefs to make the revelation.

Yesterday I forgot to put them on.

Shirley posted the update in view of her 231,000 followers on her Instagram story.

The star posted the video showing her reflection in the mirror, in just black briefs and a brown and black zebra print shirt.

She said: “Yep, so I found the biggest knickers I could find today because yesterday I forgot to put them on.”

The head judge then burst into giggles before she could finish her sentence.

Pointing at her briefs, she said today’s are “huge, huge draws”.

Shirley then gave the details of where and when to watch her pantomime show that is on at Assembly Theatre in Tunbridge Wells.

Speaking about the panto on kmfm, she said: “I’m not used to playing a wicked character but I must say it is quite a juicy part.

“I am ready for those boos – bring them on.”

Due to the Strictly Come Dancing final on Saturday, Shirley will not be able to perform in the panto on Saturday but will be back the following day.

Shirley has been very open about her recent cancer scare, documenting the progress with her fans.

At the end of November she gave her worried fans a reassuring health update as she let them know her kidney was cancer free and other polyps were “absolutely fine”.

Shirley alarmed viewers in September after they spotted a lump under her arm, and needed further tests after doctors were concerned about her high hormone levels.

Shirley recently revealed she’s trying not to “dwell” amid her recent health scare and upcoming biopsy results, stating: “It will be what it will be”.

She also told in an appearance on Good Morning Britain in November that she was trying to stay busy, after the “whirlwind” in her life after discovering the lump.

Speaking to Richard Madeley and Susanna Reid about her recent health journey, Shirley told how she initially ignored fans’ comments about her alarm, but sought help from her GP after more concerned messages came flooding in.

She said: “It’s been the last two weeks – it has been like a whirlwind with everything else I’ve been doing.

“I was doing a Paso Doble move, put up my right arm and a couple of people got in touch and I kind of ignored and then there was about 11 people getting in touch so I thought, no I better go to the doctor.

“I went off to see my doctor, she had a little feeling around and she couldn’t feel anything but she had some past blood tests from a few months before. I hadn’t gone back for the results – my fault – and she was alarmed by them.”

Shirley will be judging on Strictly this weekend as the final takes place.

AJ Odudu, John Whaite and Rose Ayling-Ellis will be battling it out to win the Glitterball.

You can watch the Strictly Come Dancing final Saturday on BBC One at 7pm.