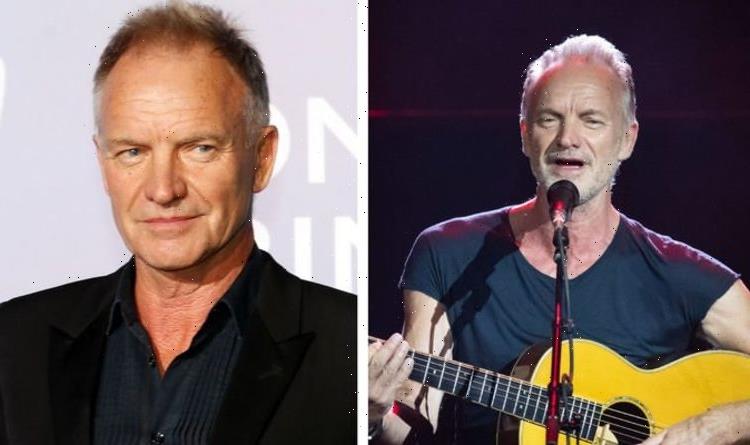 Similar to the likes of his musical peers, such as Madonna, Cher, Prince, Slash and Bono, who are all known for just that one name, Sting followed in the same footsteps by opting not to use his real moniker.

But what exactly made the 70-year-old, whose real name is Gordon Matthew Thomas Summer, decide to change to the mononym we’ve all grown to know and love?

The story of how Sting acquired his stage name is rather interesting, considering there are so many variations, with the iconic musician himself having once claimed to have forgotten how the name came about since he’s been using it for so long.

The most popular variation is that Sting had landed the nickname while performing with the band Phoenix Jazzmen, during which he would often show up wearing the same black and yellow sweater with hooped stripes.

In an unearthed interview with CBS, the father of six explained: “I used to play in a traditional jazz group when I was about 16 much, with older guys.

“I used to wear these yellow and black sweaters and they thought I looked like a wasp.

“They used to joke, ‘Sting, Sting!’ and they thought it was hilarious and they kept calling me Sting. And that became my name.”

In other words, Sting’s stage name didn’t come about by choice but because his musical peers had given him that nickname, prompting him to make the switch from Gordon Summer.

In the 1985 documentary Bring on the Night, when a journalist had referred to him by his birth name, the Every Breath You Take hitmaker responded: “My children call me Sting, my mother calls me Sting, who is this Gordon character?”

Then, in an interview with Time in 2011, the Grammy winner shared that he doesn’t answer by his birth name and that everyone from his friends, fans and his loved ones have grown to accept that.

“I was never called Gordon. You could shout ‘Gordon’ in the street and I would just move out of your way”.

In 1969, the Shape Of My Heart icon enrolled at the University of Warwick in Coventry but decided to drop out after just one term to pursue a career in music instead.

But finding the time to focus on his passion wasn’t all that easy while juggling a handful of jobs, including working as a building labourer, bus conductor and tax officer.

He later returned to school when he attended the Northern Counties College of Education between 1971 and 1974 and completed his course, leading him to start a new job as a teacher.

Sting would play at numerous bars and small venues during the days he wasn’t working before moving from Newcastle to London in 1977.

There, he would meet Stewart Copeland and Henry Padovani (who would later be replaced by Andy Summers) as they formed The Police.

To date, the latter has sold over 70 million records worldwide with just five studio albums — all of which debuted at No. 1, with the exception of the band’s debut album, Outlandos d’Amour.

By 1985, however, Sting embarked on a solo career after calling it quits with his former bandmates.

He signed a record deal with A&M and went on to release his first project, The Dream of the Blue Turtles, in 1985,

Since then, Sting has released a total of 15 albums, while some of his biggest songs include Desert Rose, Roxanne, Message In A Bottle, and, of course, Every Breath You Take.

Throughout his career, Sting has won a whopping 17 Grammy awards, a Golden Globe, three Brit Awards, an Emmy and four Oscar nominations for Best Original Song.

When combining Sting’s sales from his solo career with those from his time with The Police, he has sold a whopping 120 million units, making him one of the best-selling artists in the world.