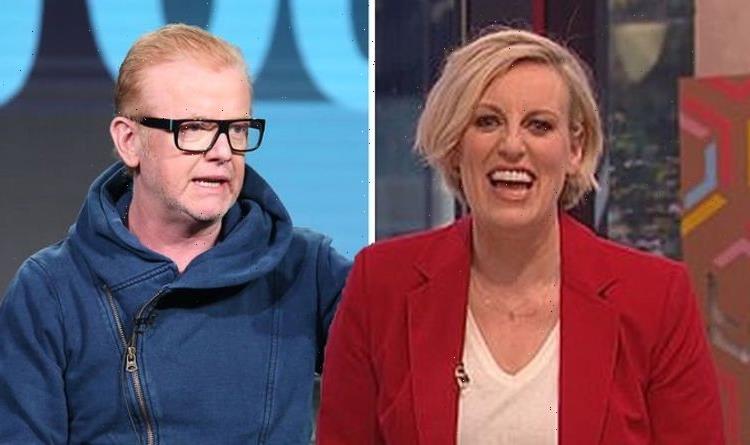 Steph McGovern has recalled how she lied to get her first presenting job on Chris Evans’ radio show. The presenter was the latest guest on Oti Mabuse’s podcast The Rhythm of Life when she made the admission.

Steph was a stalwart of BBC Breakfast before she landed her own show on Channel 4.

Over the past year, she’s been keeping viewers entertained with her magazine chat show Steph’s Packed Lunch.

However, everyone has to start their career somewhere and the broadcaster admitted hers began with a white lie.

Appearing on her friend and Packed Lunch co-star’s podcast, Steph explained how she went from behind the scenes to on air.

She said: “It’s just one of those absolutely classic TV stories where someone was ill one day on the radio, on Chris Evans’ show.

“The girl who did the business news, Rebecca Pike.

“Chris Evans wanted it to be a female financial journalist because that fitted in with the dynamics of his show.

“And so the boss of radio at the BBC was walking past me in the corridor and overheard me telling this animated story to Robert Peston.

“And he was just like, ‘Steph have you ever done live radio before?’ and I just lied and I said, ‘Yeah.’ And I hadn’t, I’d only ever been a guest on a show.”

Steph worked with Chris as she also built up her profile on BBC Radio 4 and Radio 5Live.

Speaking about working with the now Virgin Radio host, she said: “It was brilliant.

“Chris Evans is one of the most generous presenters. I learnt a lot from him about his philosophy that we all want to sound good, I’m going to make you feel a million dollars on my show.”

Elsewhere, Steph has headed off on holiday after finishing Packed Lunch for the summer.

The star posted the update on her Instagram page as she jetted off on a solo holiday with her daughter.

On her stories yesterday, she penned: “Thanks to the staff at LBA Airport.

“For helping me, my daughter and Eeyore get on our flight safely!”

She added: “It’s stressful on your own with a toddler isn’t it!”

While Steph is having a short break now, she will be back on screens later in the summer.

She recently announced her return to morning television as she hosts breakfast coverage of the Tokyo Paralympics.

Discussing the news, she said: “My 3.30am alarm clock will be going back on in the summer.

“I’ll be working with Arthur Williams @Arthurvw1986 to host the Paralympics Breakfast Show on @Channel4 #Paralympics.”

You can listen to Oti’s full Rhythm of Life podcast here.