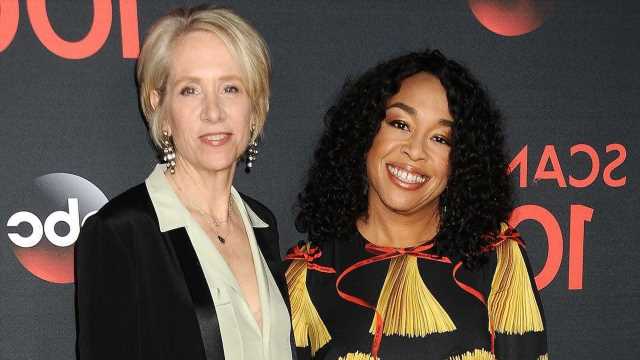 Congrats are in order for Shonda Rhimes and Betsy Beers!

The longtime producing partners were honored with the prestigious Distinguished Collaborator Award at the 2021 Costume Designers Guild Awards. Nicola Coughlan, who portrays Penelope Featherington in their newest hit series, Bridgerton, presented the ladies with the award on Tuesday, calling Shondaland “a place to be human” and dressing to the nines.

“Good evening, Shonda and I couldn’t be more thrilled and grateful for this honor,” Beers began, touching on the costume designers and their “wondrous craft that has helped us bring these characters and their essences” to life. “What you do takes research, imagination, technical skill, patience, vision and often audacity. And with each of our series, it’s clear that costume designers have shifted the culture and created moments and style trends that often outlive the shows from whence they came.”

Rhimes, added, “Costumes are more than are the clothes that actor wear on the screen. Costumes tell stories, spirit, and the journey of every character is communicated in every ballgown, every scrub cap, every white cap you see on screen.” She then individually thanked all the “ingenious creative minds” who have partnered with Shondaland and helped them bring their characters to life.

She concluded by giving her sincere thanks to the Costumes Designer Guild Awards.

A huge congratulations to the founder of ShondaLand 🤗 #[email protected]@shondarhimespic.twitter.com/8HYCBhMJHO

CDG president Salvador Perez previously said in a statement announcing the news that “we can think of no other duo more deserving of this award.”

“From the record-breaking series Grey’s Anatomy to the latest binge-worthy series Bridgerton, Shonda Rhimes and Betsy Beers have been longtime partners of the Costume Designers Guild,” he explained. “Throughout the years, the two have created cultural-defining TV moments with support from fellow collaborators and costume designers.”

CDGA Executive Producer JL Pomeroy added, “Shonda and Betsy’s partnership spans decades; their collaboration as two powerhouse women in Hollywood is as inspirational as the collaborative relationship they build with each of their costume designers. Together, they build worlds where every race, ethnicity, gender, and sexuality is celebrated as beautiful and represented in every form. We felt this year was especially meaningful to showcase their aspirational worlds on-screen and off, in their dedication to the art of storytelling.”

The acceptance of the accolade comes just hours after Netflix revealed that Bridgerton has been renewed for seasons 3 and 4. The show’s second installment — which will focus on eldest Bridgerton child Lord Anthony’s (Jonathan Bailey) quest for love — is currently in production.

“From the first time I read Julia Quinn’s delicious Bridgerton series, I knew these were stories that would captivate a viewing audience. But the evolution of this adaptation would not be a success without the many significant contributions of the entire Shondaland team,” Rhimes said in a statement. “This two-season pickup is a strong vote of confidence in our work and I feel incredibly grateful to have partners as collaborative and creative as Netflix. Betsy and I are thrilled to have the opportunity to continue bringing the world of Bridgerton to a worldwide audience.”

Fans were shook earlier this month when news broke that breakout star Regé-Jean Page would not be returning as the Duke of Hastings for season 2. Rhimes and Beers addressed his departure in a new interview released by Vanity Fair on Tuesday.

“[Regé-Jean] is a powerful, amazing actor and that meant we did our job — every season, our job is finding the right people and putting together this incredible, world-shifting romance,” Rhimes said. “I don’t know that I expected this much of an explosion, given that every book [in the Bridgerton series] is a different romance. What would be the ever-after of this combo? I mean, really: what would Regé-Jean do, you know what I mean? We gave them their happily ever after! And now we have this next couple coming.”

“He’s amazing, but that’s our job and something that Betsy and I have been doing since — well, God, has it been 20 years now? — is finding guys,” she continued. “I mean, hopefully, ladies too, but finding men that, that our audiences find devastatingly attractive and they become incredibly overly attached to, and they get enraged about when we move them about in any way.”

Beers chimed in, adding, “It’s delightful that fans were so invested in his character, and he’s a wonderful actor and a terrific guy. I just want to say that. OK? He is.”

As for reports that they offered Page a deal to return for some season 2 cameos, but he turned it down? Rhimes told the outlet they “made a one-season deal with him at the beginning of season one.”

“That was the plan: come and do one season as the Duke. Anything else was extra and wasn’t really the plan when we started, wasn’t the plan when we finished,” she explained. “So there’s a lot of fantastically interesting talk that’s been going on, mainly cause I think people are having a hard time letting go.”

Rhimes clarified to Vanity Fair that Page was invited to return for season 2 cameos, along with a few other season one characters outside the Bridgerton family. Hear more on Page’s departure, and everything we know about season 2 of the series, in the video below:

Rege-Jean Page Not Returning for Season 2 of ‘Bridgerton’