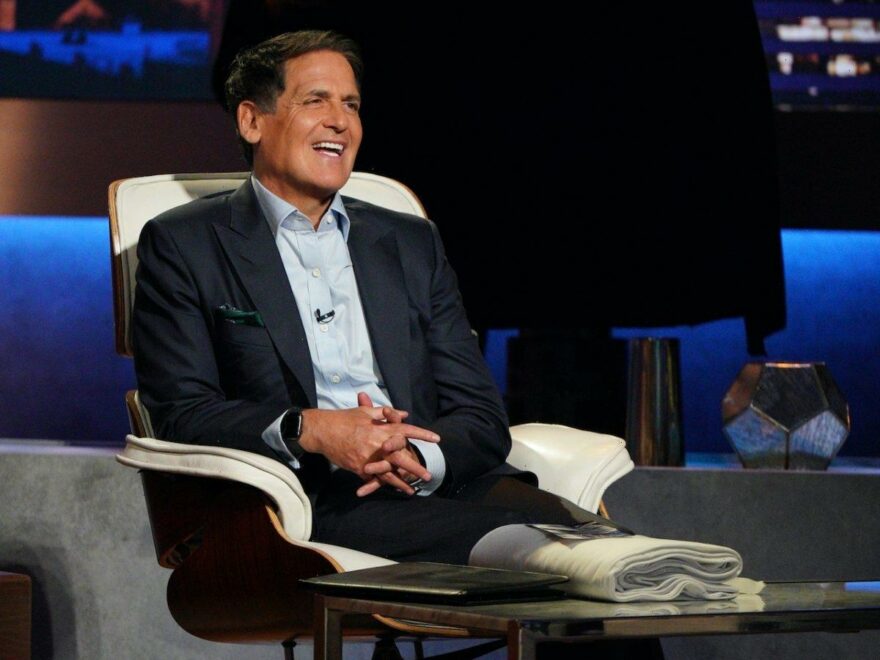 When Cameron Cruse and Lisa Bradley pitched their handbag company R. Riveter on Shark Tank in 2016, they fielded offers from investors Robert Herjavec, Kevin O’Leary, and Mark Cuban. The Sharks were impressed by Cruse and Bradley’s mission to employ military spouses nationwide and were confident in their ability to grow the business. The entrepreneurs went with Mark Cuban’s offer of $100K for 20 percent equity in their company, and have no regrets.

Mark Cuban is ‘there when we need him’

Military spouses Cruse and Bradley launched R. Riveter in 2011 to fulfill an employment need they found prevalent among military families. Creating a business that offered “mobile, flexible income” for those often being relocated, the entrepreneurs decided to produce handbags as a way to hire others in military families from around the country. Their business model and mission won over Herjavec, O’Leary, and Cuban when they pitched in the Tank. Cuban was picked as an investor.

“We got a great partner with Mark Cuban and he’s still involved in the business today,” Cruse told Showbiz Cheat Sheet. “The way he resonated and seemed to just connect with the idea of how we were supporting military families was just something you can’t describe — you can just sort of feel that they understand. He’s been awesome and he’s really helped to support and be there when we needed to grow the business. We’re really happy with our our choice.“

Cuban has made a profitable and positive impact on the company, but doesn’t micromanage. The Shark Tank star makes himself available to Cruse and Bradley but gives them freedom in running R. Riveter.

“He’s great because he’s there when we need him, but he still trusts us to run and grow the business as founders, so we kind of get the best of both worlds,” Cruse said of Cuban. “We get his experience and his resources. But at the same time, he’s pretty hands off when it comes to just letting Lisa and I make those decisions.”

‘Shark Tank’ experience was ‘terrifying’ but ‘well worth it’

Appearing on Shark Tank has become a primary goal of entrepreneurs wanting to catapult their businesses to success. Pitching in front of the famous business icons was a nerve-wracking experience for Cruse.

“It was surreal,” the R. Riveter co-founder said. “It was one of the scariest things I’ve ever done, but obviously it turned out really well… it really propelled us forward. Being in the Tank was a terrifying experience, but well worth it and very rewarding afterwards.”

Still learning the ropes in the business world, Cruse felt a bit unsettled in the choppy waters of the Tank at first. But sticking to R. Riveter’s mission helped her navigate her way through the pitch.

“Lisa and I had never done anything like this before,” she explained to Showbiz Cheat Sheet. “When we started the business in 2011, we were basically Googling how to make handbags and how to start a business and how to register your LLC. So from just kind of getting our our footing underneath us, then to stand up in front of the five most famous business people on TV was very intimidating.”

“When we got up there and we started the pitch, we knew that all we can do is be who we are and tell them our mission and everything that we were trying to do,” Cruse continued. “And the coolest part about it was the way that everybody resonated with it, even though we didn’t have 20 years in business. You can see that our mission was worth supporting and we had something worth pursuing.”

The company recently launched the Ada tote in honor of English mathematician Ada Lovelace. The black canvas and brown leather bag offers a roomy interior with two slip pockets and one zipper pocket.

Putting the spotlight on Breast Cancer Awareness month in October, R. Riveter has teamed up with BreastCancer.org to raise awareness of early detection. Releasing the Fight Like Rosie collection on Sept. 16, a portion of the proceeds will go towards this mission.

Cruse, who holds a Master’s degree in architecture, added that R. Riveter also carries “accessories like candles and jewelry that we call Riveter-made, that is made by remote Riveters all across the country.”

The entrepreneurs plan to introduce more new designs in November to celebrate the company’s 10th anniversary. For more information and to check out products, go to R. Riveter’s website.