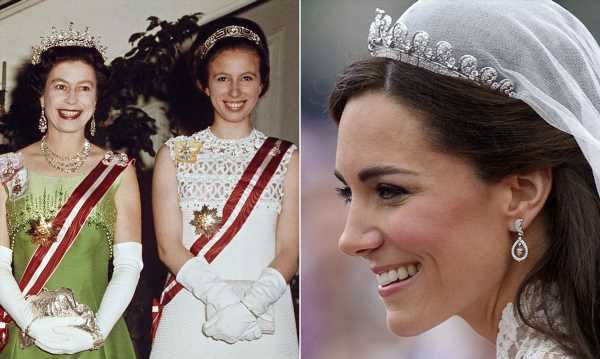 Seeing the royals wearing their finest tiaras is always one of our highlights. Opportunities to display glittering jewels are quite rare, but it was once commonplace for the royals to wear tiaras to film premieres and balls.

For the Queen and the British royal family, sparkling headwear is now usually only reserved for state banquets, Her Majesty’s annual Diplomatic Corps reception and the State Opening of Parliament.

Nowadays, the first time we see a royal wearing a tiara is on their wedding day, but for some European royal families, this can also be on their 18th birthday.

Princess Margaret, the Princess Royal and the Duchess of Cornwall have also bucked the tradition – find out why in our gallery.

While the monarch has a vast jewellery collection passed down from the Queen Mother and her grandmother, Queen Mary of Teck, she wore Queen Mary’s diamond fringe tiara for the first time on her wedding day to Prince Philip in 1947.

There was a slight mishap with the jewels on the day as the tiara broke and it had to be quickly fixed before Princess Elizabeth walked down the aisle. The tiara made another more recent appearance when Princess Beatrice borrowed the headpiece from her grandmother for her wedding to Edoardo Mapelli Mozzi in July 2020.

While most royals wear tiaras for the first time on their wedding, as the only daughter of the Queen and the Duke of Edinburgh, Princess Anne often wore them before her first marriage to Captain Mark Phillips in 1973. She first sported a tiara at the age of 17 in an official portrait in 1979 and here she’s pictured wearing the Cartier Halo tiara at the State Opening of Parliament later that year.

MORE: Princess Charlotte: when will the royal wear her first tiara?

The Duchess of Cambridge

The Cartier Halo tiara has since become synonymous with the Duchess of Cambridge, who borrowed the jewels for her wedding to Prince William in 2011. The headpiece dates back to 1936 and it was given by the Duke of York to the Duchess of York before they became King George VI and Queen Elizabeth.

The Duchess of Sussex

Meghan Markle only had one tiara moment before she and Prince Harry stepped back as senior royals in 2020. The former actress dazzled in Queen Mary’s diamond bandeau tiara for her wedding day in 2018.

The heirloom diamond and platinum piece was made in 1932, with the ten-diamond centre brooch dating from 1893. The brooch was originally a gift from the County of Lincoln to the then-Princess when she married Prince George, Duke of York in 1893.

MORE: 8 royals who made last-minute changes at their weddings

The Duchess of Cornwall

Camilla might not have worn a tiara on her wedding day to Prince Charles in 2005, but she pulled out all the stops for her debut later that year. The Duchess was loaned the impressive Delhi Durbar tiara to wear for a banquet which hosted the Norwegian royal family, but it hasn't been seen since that outing.

The Queen’s granddaughter wowed in the Greville Emerald Kokoshnik tiara for her nuptials to Jack Brooksbank in 2018. The jewels were made by Boucheron for Mrs Greville in 1919 and in 1942, they were bequeathed to the Queen.

MORE: 21 royals who made adorable bridesmaids and pageboys in unearthed wedding photos

Emperor Naruhito and Empress Masako's only child celebrated her 20th birthday on Wednesday 1 December 2021 and for her formal coming of age ceremony, she made her tiara debut. Typically, princesses in the Imperial Family receive a new tiara on their 20th birthday, but Aiko received her paternal aunt's Sayako, formerly Princess Nori's tiara instead.

The Countess of Wessex

The first time we saw Sophie wearing a tiara was on her wedding day to Prince Edward in 1999. The ‘Anthemion’ tiara was gifted to the bride for her big day and is known to be made up of a number of antique pieces from the Queen’s collection.

It’s become Sophie’s signature tiara and Her Majesty’s dresser Angela Kelly confirmed in her book The Other Side of the Coin: the Queen, the Dresser and the Wardrobe, that the headpiece was redesigned by jeweller Harry Collins for Sophie to wear at the State Banquet with President Trump in 2019.

MORE: The Countess of Wessex said the sweetest thing about Prince Edward at their engagement announcement

The future queen was given her first tiara on her 18th birthday and it made several appearances in 1995. Crown Princess Victoria‘s first headpiece was small in comparison to the tiaras she’s since worn, with a simple band of diamonds.

Crown Princess Victoria's younger sister wore her first tiara in the year that she turned 18 in 2001. Princess Madeleine wore the modern fringe tiara at Crown Prince Haakon and Princess Mette-Marit of Norway's wedding and it's thought to be one of her favourites. The royal bride wore it for her nuptials to Christopher O'Neill in 2013.

The Queen's sister often wore tiaras before her marriage to Antony Armstrong-Jones in 1960. She frequently wore the Cartier Halo tiara in the 1950s, including at palace receptions, film premieres and Princess Ragnhild of Norway's wedding.

King Olav of Norway gave his granddaughter, Princess Martha Louise, the King Olav Gift tiara on her 18th birthday. The royal wore the diamond and pearl headpiece on many occasions, including at her parents King Harald and Queen Sonja’s joint 60th birthday celebrations in 1997.