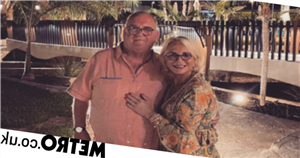 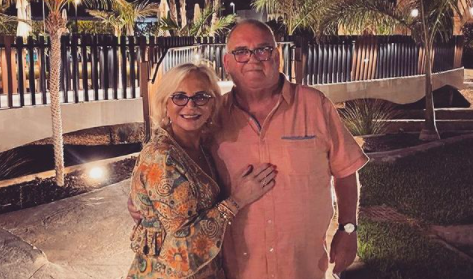 Sally Morgan’s husband of 46 years has died following a ‘short battle with coronavirus’.

The Celebrity Big Brother star, also known as Psychic Sally, confirmed that her husband John, 74, has died in a heartbreaking statement from her team shared to Instagram.

Alongside a black and white picture of John and Sally, the statement read: ‘It is with deepest sadness that we announce the passing of John Morgan, after a short battle with Coronavirus.

‘Sally would like to thank the amazing NHS and the incredible Doctors and Nurses at East Surrey Hospital for their outstanding work, love and compassion throughout everything.

‘John was a loving Husband, Father and Grandfather and will be missed greatly.

‘We would like to thank you all for the love and support you have shared over the last few weeks.’

Shirlie Kemp shared her condolences beneath the post, writing: ‘Oh no Sally I’m so so sorry … your lovely John your hearts must be broken 💔sending you much much love and big hugs.’

Christine McGuinness added: ‘Sending all my love, my heart breaks for you Sally. Your John was a true gent, such a lovely man. Prayers and thoughts with you and your family.’

Sally, 70, had been on tour around the UK, after her husband gave her the go-ahead despite his illness.

She shared on social media on September 17: ‘As you may have noticed my wonderful husband John has been absent from social media recently. Many of you have been asking if he is ok, so I wanted to be transparent and give you an update.

‘He has been rather unwell of late and is currently in hospital. He is receiving the best care from our wonderful NHS and I would like to personally thank everyone at East Surrey Hospital for their continued hard work, love and support. I feel truly blessed that John is in such great hands.

‘After much consideration and at John’s request, my tour will be going ahead and continuing as normal.’

Later, she said she had been unable to see her husband for three weeks, and said the family would ‘feel so lucky’ if he made it home for Christmas.

Weeks earlier, the couple had enjoyed a trip to Spain, and Sally praised John in numerous Instagram posts, writing: ‘Such a gorgeous evening with his lordship. 46 years and he still makes me smile.’

On another photo, Sally wrote in the caption: ‘I still love him the same today as the day I married him.’

John previously worked as his wife’s manager until 2014.

He is survived by Sally and their children Rebecca and Fern.