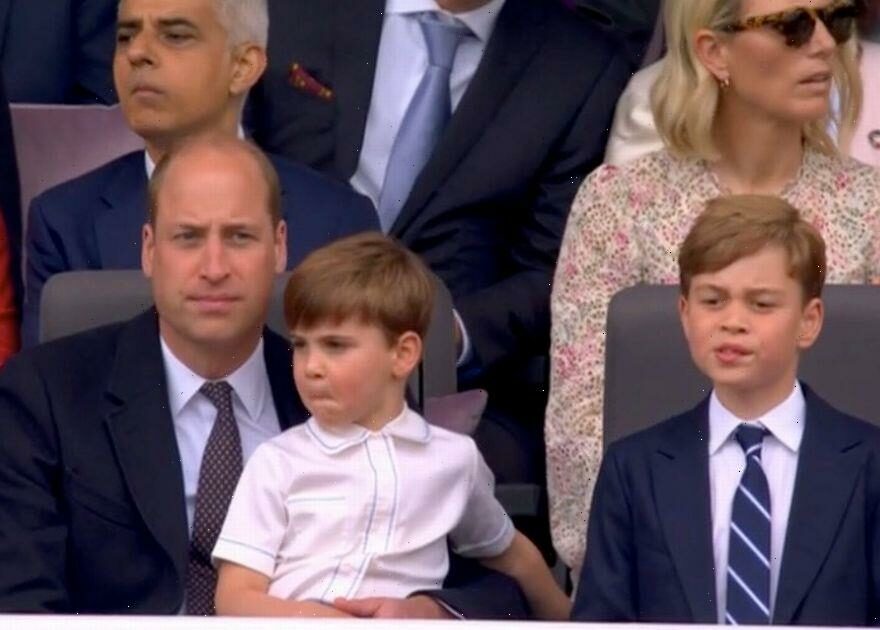 A new clip has surfaced showing the eight year old appearing 'mortified' by his animated sibling as little Louis is seen holding his arms up high above his head while flashing peace signs from the Royal box.

Prince Louis, four, appears restless in the video as he is seen wriggling in his seat while his hands are raised as Prince George watches him before burying his head in his hands.

Kate and William's youngest child was also seen at the Jubilee show waving his arms in the air, standing in his seat and even stuck his tongue out at his mother cheekily at one point.

Royal fans have found the clip of Prince George burying his head in his hands highly amusing, as one person wrote online: “Oh my goodness, George’s reaction…classic big bro. Too funny, what a fabulous little family.”

Another commented: “As the oldest sibling in my family, I thought the best part was watching Prince George’s mortified reaction at the exuberance of Prince Louis. Really grounds that whole family… I love it!”

“Too cute and sweet. Louis will keep William and Kate in their toes for sure, Louis is filling the role of being the youngest member of the family perfectly,” a third person said.

Another added: “[Prince Louis] was living his best life and we should all be able to do that”.

The 43 year old former rugby player is married to the Queen’s granddaughter Zara Tindall, 41, and sat with his wife and their children behind Prince Louis and his siblings during the celebrations.

Speaking on his podcast The Good, The Bad and The Rugby, he said: “Louis, he was just wanting to have fun. [His] visible excitement might have been down to the sweets the kids enjoyed during the show.

“There were a lot of sweets out back though, so there was a real sugar high.

“The [children] all young… it's a long time. But as any parents knows you just do whatever needs to be done.”

Prince Louis has gained much popularity from Royal fans following his funny expressions at the Jubilee celebrations, with many having since called him “iconic” and “as legendary as ever”.

For your latest royal news, sign up to OK!'s daily newsletter here.