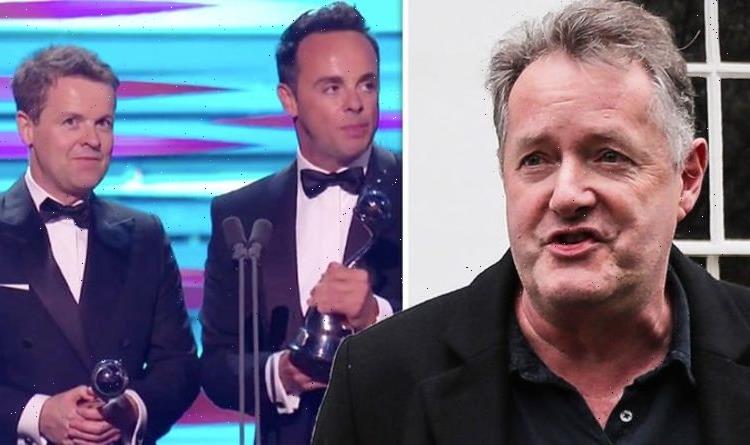 Piers Morgan, 56, has hit out at Ant and Dec once again after they beat him to the Best Presenter award at the NTAs last night. The former Good Morning Britain host, who opted to skip the event at London’s O2 Arena, also branded the awards ceremony a “snoozefest”, as the same stars tend to win each year.

It comes after Ant and Dec’s triumph marked their 20th win of the coveted presenting gong in a row.

Piers fumed in a new interview: “Well, I knew Ant & Dec would win. I don’t even know why they bother to count the votes.”

The star went on to slam the presenting duo for their show, I’m A Celebrity… Get Me Out Of Here!, insisting that his “contribution” to TV over the past year was “more significant”.

He added: “We’ve just been in the middle of a pandemic in which their contribution was to interview people about eating kangaroo testicles in a Welsh castle.

“I felt my contribution to the biggest news story of our lifetime was slightly more significant.”

Piers was praised by GMB viewers for criticising the government’s handling of the COVID-19 pandemic, before he quit the show after storming off the set over his views on Meghan Markle’s interview with Oprah Winfrey.

He added to the Daily Mail: “That is the lot of anybody who works in television.

“There is an unwritten rule that Ant & Dec win all the awards and will continue to do so.

“So, I don’t think they should really bother with these awards anymore because they’re sort of pointless.”

Piers then hit out at ITV’s This Morning, which has consistently won the Daytime award at the NTAs over the past few years.

He continued: “When you’ve got them [Ant & Dec] winning for 20 years running and you’ve got This Morning winning the Daytime one for god knows how long as well, it’s obviously just one big carve up.

“A predictable snooze fest with no jeopardy or chance of anybody winning so it just seems to be that the NTAs have become a bit of a waste of time.

“They may as well just give them their awards at home and spare everybody the schwep down to East London.”

The star addressed the pair’s win in view of his 7.9 million followers.

“Thoroughly deserved 20th consecutive win – the way they held those jungle contestants to account during the pandemic was absolutely brilliant. “

When asked about their triumph over the outspoken media personality, Ant told Express.co.uk, The Mirror and Daily Star: “We don’t have a lot to say about Piers Morgan.”

Dec chipped in: “It’s not about him tonight!”

As well as being up against the comedic duo, Piers went head to head with This Morning’s Holly Willoughby, The Chase’s Bradley Walsh and Alison Hammond.