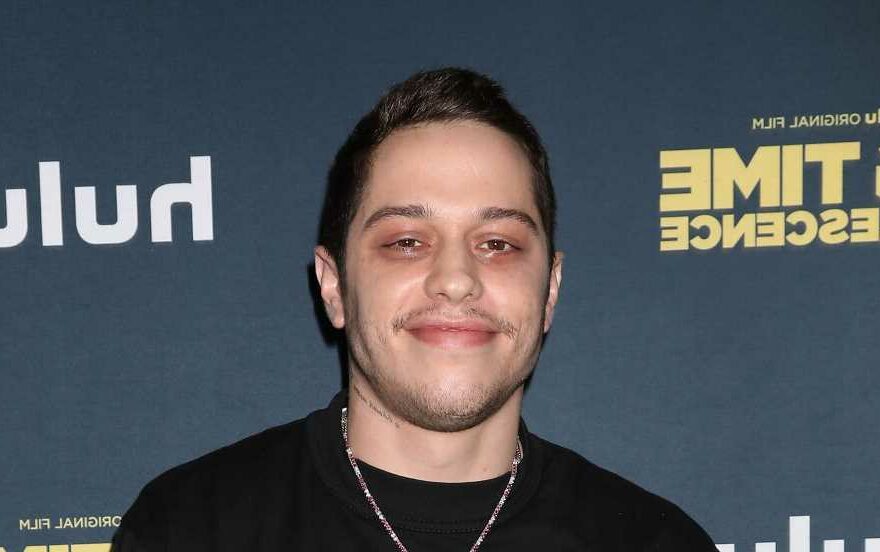 It was the plot twist no one could’ve seen coming: Pete Davidson somehow became one of Hollywood’s biggest heartthrobs. With his kind demeanor and top-notch sense of humor, the “Saturday Night Live” star has won the hearts of some of the most desirable women on the planet. In honor of his latest headline-making romance, Wonderwall.com is taking a look back at the beauties Pete has loved and lost over the years.

In late 2014 — around the time he joined the cast of “Saturday Night Live” — Pete Davidson and fellow comedian Carly Aquilino took their relationship to the next level. Things between the pair — who ran in the same social and professional circles for years before they started dating — grew increasingly serious throughout 2015: The “Girl Code Live” hostess frequently took to Instagram to chronicle their burgeoning romance. By the end of the year, however, they’d gone their separate ways. They’ve kept things friendly over the years, though: In early 2019, Carly and Pete performed at the same Long Island entertainment venue and posed together backstage for a group pic with other friends. She even had a small role in his 2020 feature film “The King of Staten Island.”

RELATED: The weirdest celeb hookups of 2021

Pete Davidson started dating Cazzie David in early 2016. (It’s widely believed they first connected when her dad, funnyman Larry David, hosted the Feb. 6, 2016, episode of “Saturday Night Live.”) Things between them got serious fast: In May 2016, Pete told People magazine of the writer, “I just love her very, very much.” Three months later, they made their red carpet debut as a couple at the taping of the “Comedy Central Roast of Rob Lowe” in Los Angeles. The comedian also got several tattoos dedicated to his then-girlfriend including a caricature depicting her face and torso on his forearm and her name on his ring finger. In late 2018, TMZ reported that Pete even proposed to Cazzie “multiple times during their two-year relationship” and that she “rejected his offer each time.”

As Cazzie David revealed in her 2020 book of essays “No One Asked For This,” it was her decision to end her relationship of more than two years with Pete Davidson in early 2018. It was “an exceptionally hard task,” she explained, because they were “kindred spirits” and her “grotesque middle school crush infatuation” with the funnyman “never subsided.” But ultimately, things between them turned toxic. A few days after she dumped Pete, Cazzie started having second thoughts about throwing in the towel. But by the time she called him to reconcile, it was too late: He told her “he was now the happiest he had ever been” and “wanted to continue our time apart.” Not long after that, he texted to tell her they were over for good. The very next day, she discovered he’d already moved on with someone else… Although Cazzie initially struggled with how quickly Pete rebounded from their romance — “I felt like I was being terrorized,” she wrote in her book — she and her ex are now on good terms. She even shared a special note to him in her book’s acknowledgements section, writing, “Pete: I love you. Thank you for being encouraging when you did not have to be. Your bravery inspires me and your friendship means the world to me.”

Pete Davidson and Ariana Grande first met in 2014 when they made their “Saturday Night Live” debuts on the same episode of the long-running sketch comedy series. They grew closer after she hosted “SNL” in 2016 but didn’t take their relationship to the next level until May 2018 when his romance with Cazzie David started winding down. Per the comedian’s usual modus operandi, things between them got serious fast. They made their relationship Instagram official on May 30, 2018, got engaged in early June 2018, moved in together later that month and made their red carpet debut as a couple at the 2018 MTV Video Music Awards on Aug. 20. They also adopted a pet pig together and started collecting tribute tattoos to one another … as Pete began covering up his tattoos dedicated to Cazzie. Things were going well, it seemed… But then tragedy struck…

On Sept. 7, 2018, Ariana Grande’s ex-boyfriend Mac Miller died of a drug overdose at his home in the Los Angeles area. His sudden death spelled doom for the pop star’s relationship with Pete Davidson. (She and the rapper split in early 2018 — just weeks before she started seeing the funnyman.) Within a month, Pete and Ariana had called it quits. TMZ later reported that Mac’s death — which left Ariana “an emotional wreck” and “in an incredibly dark place” — was a “life-changing fork in the road” for her and Pete and “the tipping point that led to their split.” Essentially, she realized that she’d rushed into things and that “she couldn’t be fully invested in her relationship with Pete” while mourning Mac. Pete said as much during an early 2020 interview with Charlamagne Tha God: “I pretty much knew it was over around after that. That was really horrible, and I can’t imagine what that’s like. … All I do know is that she really loved him, and she wasn’t putting on a show or anything,” he said of Ariana’s heartbreak over her other ex. As for the chart-topper… During a 2019 interview with Vogue, she described her relationship with Pete as “frivolous and fun and insane and highly unrealistic” as well as “an amazing distraction” from a difficult time in her life. “I loved him, and I didn’t know him,” she said of the “SNL” star. Ouch! Although the split was said to be amicable, things between Ariana and Pete briefly soured in the wake of their breakup. Fortunately, by the time she dropped her megahit “thank u, next” — which references her relationship with the comedian — on Nov. 3, 2018, they’d smoothed things over.

In January 2019, Pete Davidson and Kate Beckinsale practically broke the Internet when they were spied flirting at a Golden Globes afterparty. The flirtation kicked off a full-blown fling between the age-mismatched duo (there’s a 20-year age gap between them) that culminated in a public make-out session at a hockey game in New York City. By April 2019, though, they were through. The following year, the “Saturday Night Live” star told Charlamagne Tha God that his “uncles freaked out” when he started spending time with the English actress, who was “understanding” of his mental health issues. He also revealed that they called it quits when he sought treatment for those very same issues. He didn’t stay single for long, though…

In late August 2019, Us Weekly broke the news that Pete Davidson had been dating Andie MacDowell’s daughter — “Once Upon a Time… in Hollywood” and “The Leftovers” actress Margaret Qualley — “for a couple of months.” Per usual, things got serious fast. The new duo went big for their official debut as a couple: The same month they were first linked, he joined her at the 2019 Venice Film Festival premiere of “Seberg,” in which she had a small role. A couple days later, they were photographed holding hands while exploring the Italian city together. By that October, however, they’d gone their separate ways. The following year, Pete told Charlamagne Tha God that Margaret has a “beautiful soul” and is a “great girl.”

In October 2019 — the same week Us Weekly broke the news that Pete Davidson and Margaret Qualley had gone their separate ways — the funnyman was spied dining in New York City with another celebrity scion: Cindy Crawford and Rande Gerber’s daughter, Kaia Gerber. A month later, they were snapped holding hands as he joined her at a friend’s wedding in Miami. But it wasn’t meant to be: They called it quits after the holidays that year when he went back to rehab. In early 2020, a couple months after they’d thrown in the towel, Pete told Charlamagne Tha God of Kaia, “She’s very young. She should be having fun. She shouldn’t have to worry about some dude that just has issues. She should be enjoying her work. … It just wasn’t the right place or the right time at all.” He then called the model-actress “beautiful” and said that she’s “smarter” than him. He added that he was “going through a lot” during their relationship. Over the course of the next year — thanks in part, no doubt, to the coronavirus pandemic — it was all quiet on the western front where Pete’s love life was concerned…

In March 2021, the rumor mill started churning away with whispers that Pete Davidson was romancing “Bridgerton” breakout star Phoebe Dynevor. At first, no one believed it… But the rumors were true! The pair made their public debut as a couple at Wimbledon in July 2021 but called it quits the following month. Distance reportedly played a role in the breakup: He’s New York City-based, while she spent a significant portion of 2021 shooting the second season of her hit Netflix show in the U.K.

In September 2021 — in the wake of Pete Davidson’s split from Phoebe Dynevor — there were questions about the nature of his relationship with “Meet Cute” co-star Kaley Cuoco, who’d recently split from her second husband, Karl Cook. Multiple media outlets reported on Sept. 8, 2021, that the “Big Bang Theory” alum and the “Saturday Night Live” star had grown quite close while shooting the rom-com. The Sun, meanwhile, reported that the budding connection between the pair might’ve played a role in their respective breakups: “When Pete and Phoebe split, there was talk that his close friendship with Kayley did play a part,” a source told the British tabloid. “But now Kayley has announced the breakdown of her marriage to Karl, those around them on the set of ‘Meet Cute’ are saying they saw it coming. Pete and Kayley have got on incredibly well since day one, but as the weeks have passed, it’s become clear there is some attraction there. Obviously they play a couple in the film and it’s all very romantic and sweet. But the chemistry between them is so palpable, it’s all people could talk about on set. When the cameras stopped rolling, they’d be cracking jokes and were clearly enjoying one another’s company. A friendship has definitely been formed between them and they seem very tight.” If there was actually anything romantic going on between Pete and Kaley, though, it came to an end once the “Meet Cute” cameras stopped rolling.

Pete Davidson started spending time with Kim Kardashian after they bonded when she hosted the Oct. 9, 2021, episode of “Saturday Night Live” amid her divorce from Kanye West. (They even shared a sweet smooch while co-starring in an “Aladdin”-themed sketch.) By mid-November, they were “officially dating.” Later that month, a People magazine source shed some light on the connection between the mother of four and the funnyman, who’s 13 years her junior: “He’s exactly what Kim needed after her divorce — someone to make her laugh and just have a fun time with,” the source said. “The end of her marriage was a very dark time for her and Pete has been the best antidote.” Things between them had grown quite serious by January 2022 when they jetted off to the Bahamas for their first official vacation as a couple. 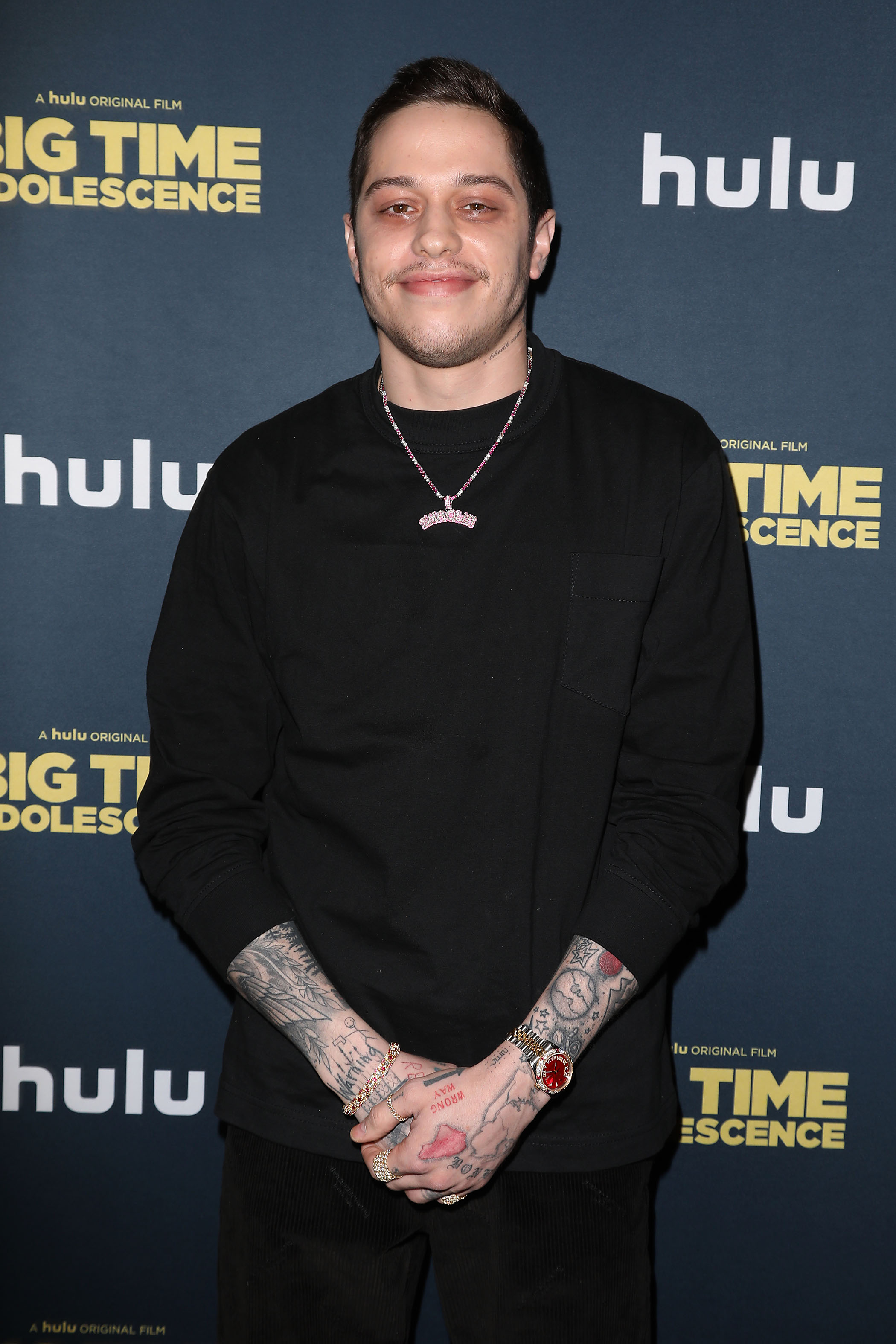 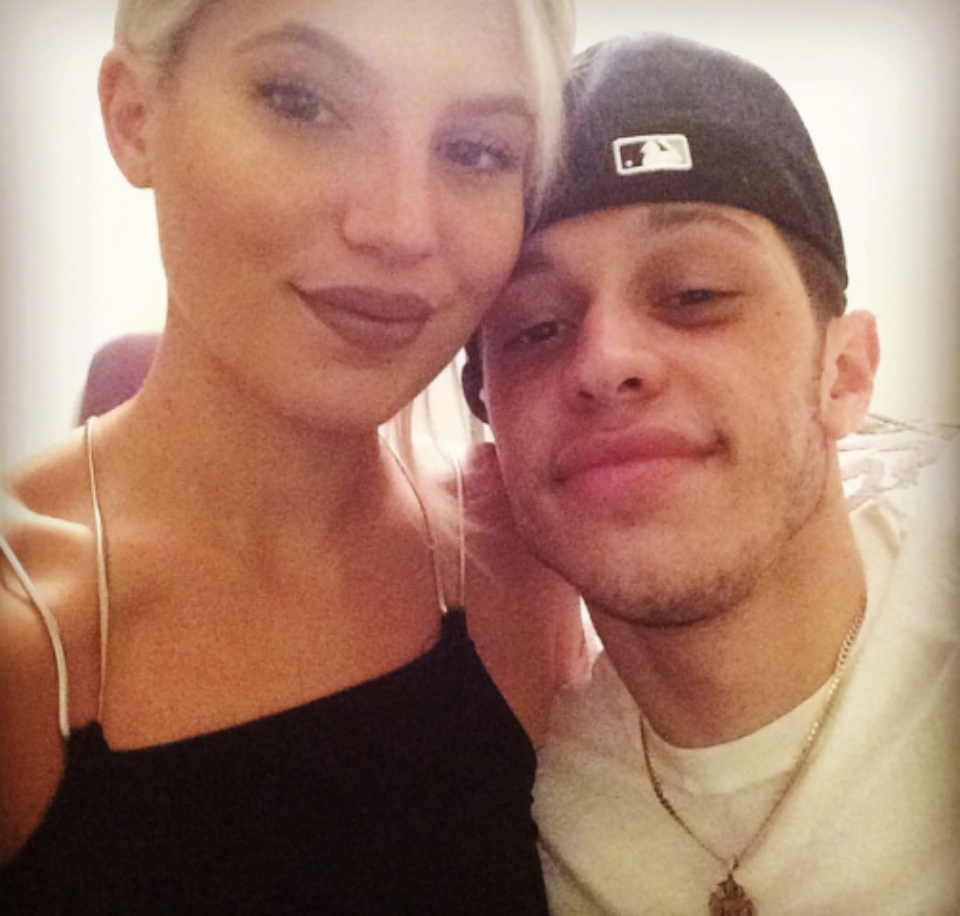 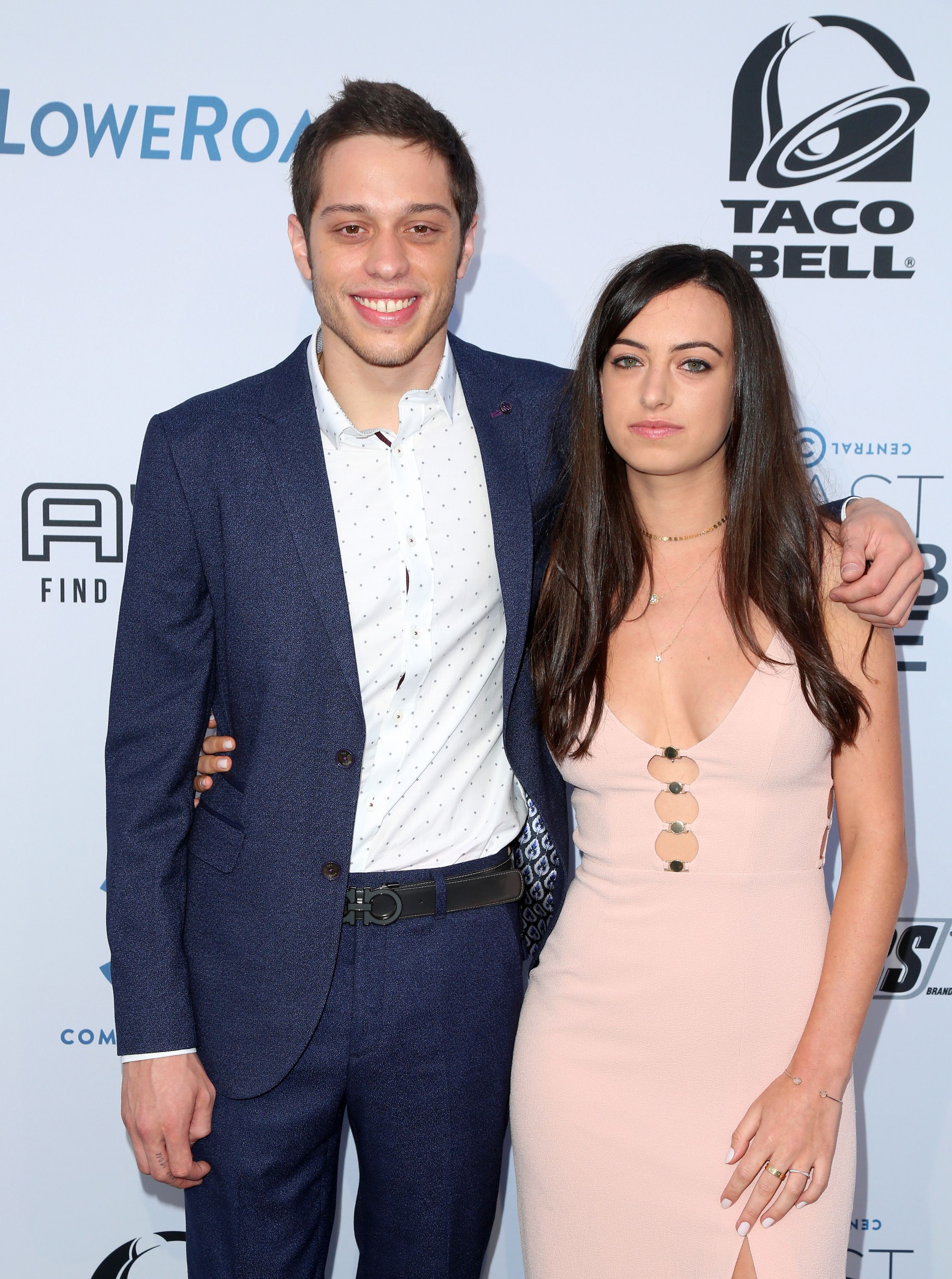 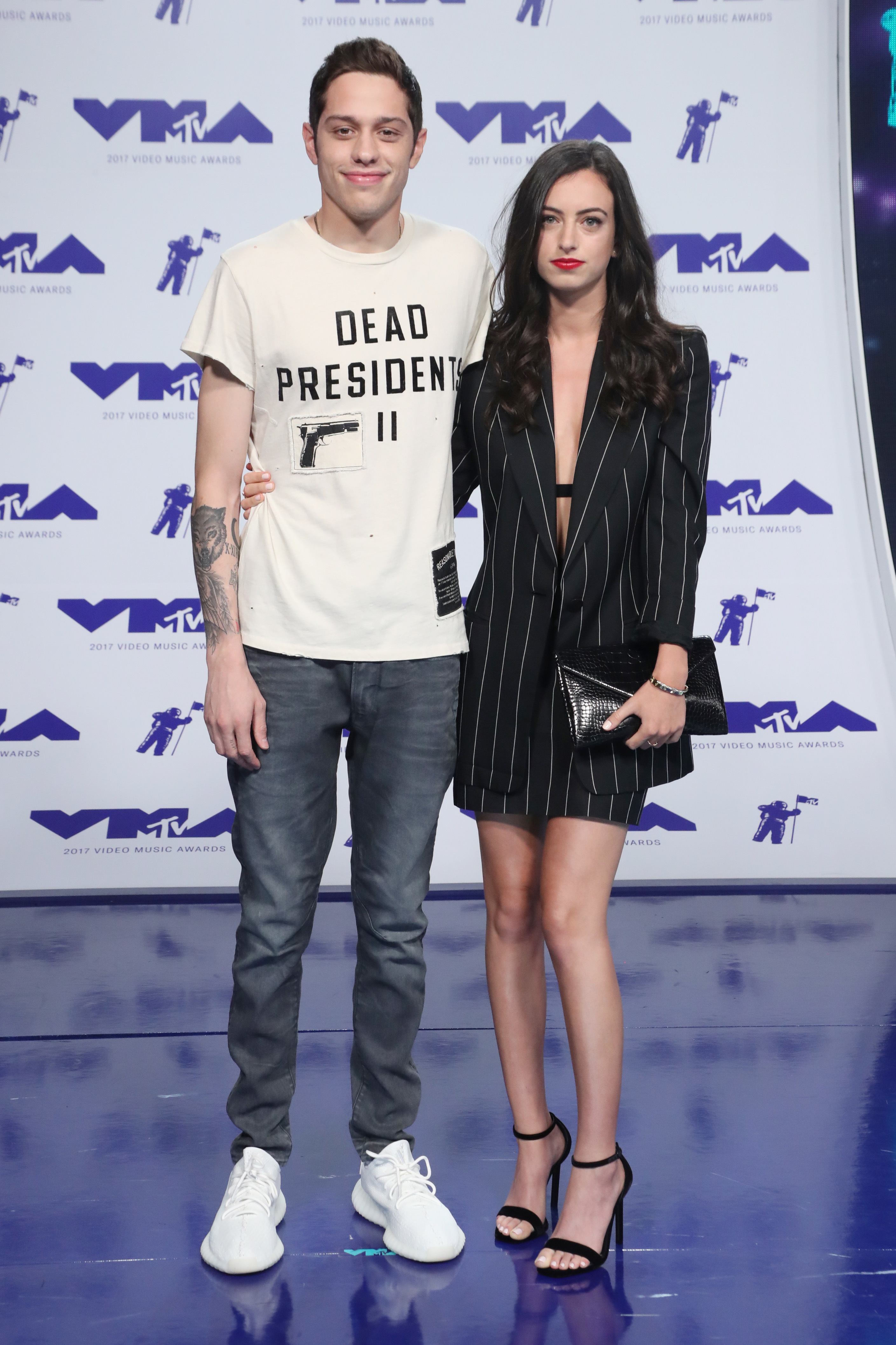 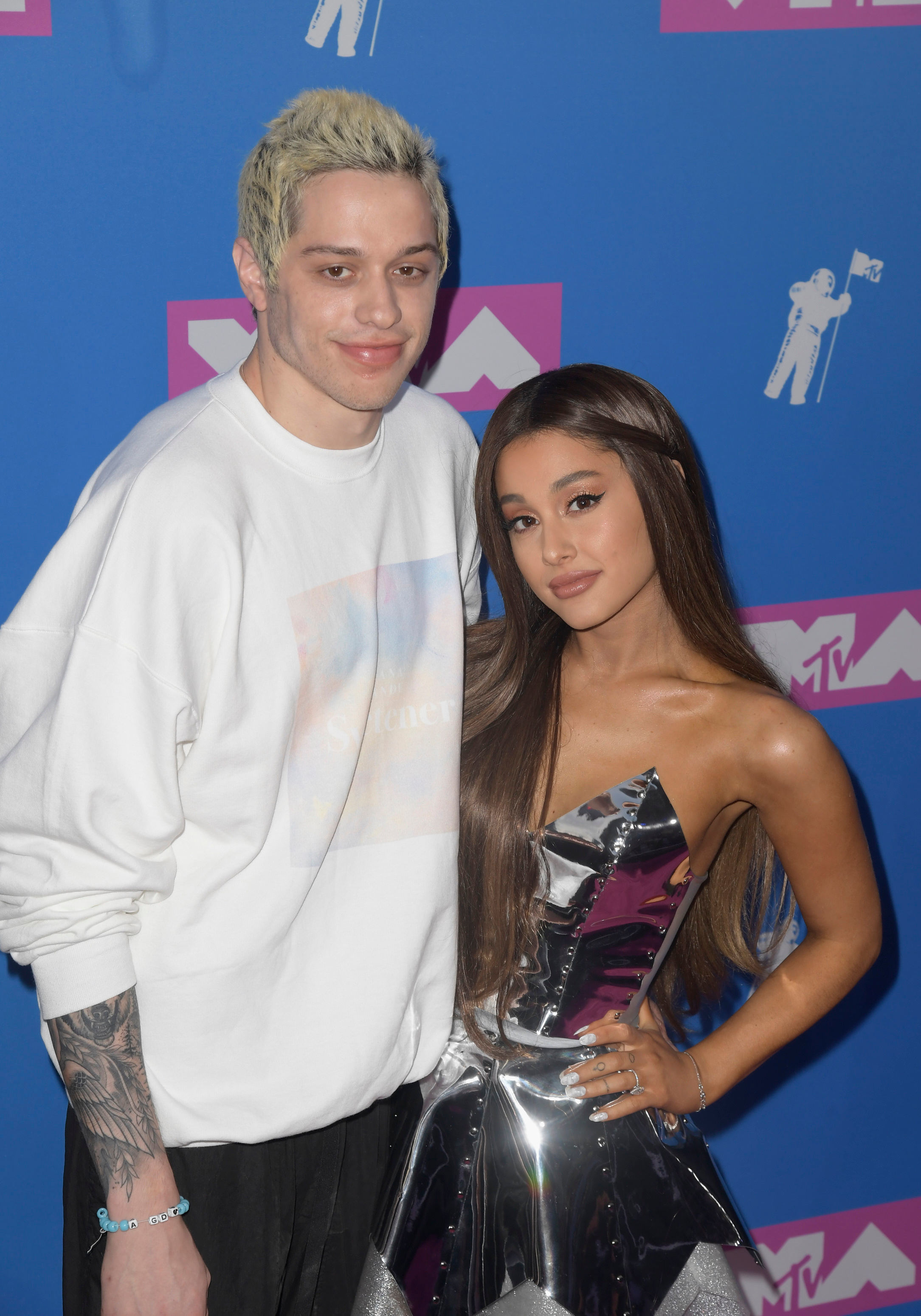 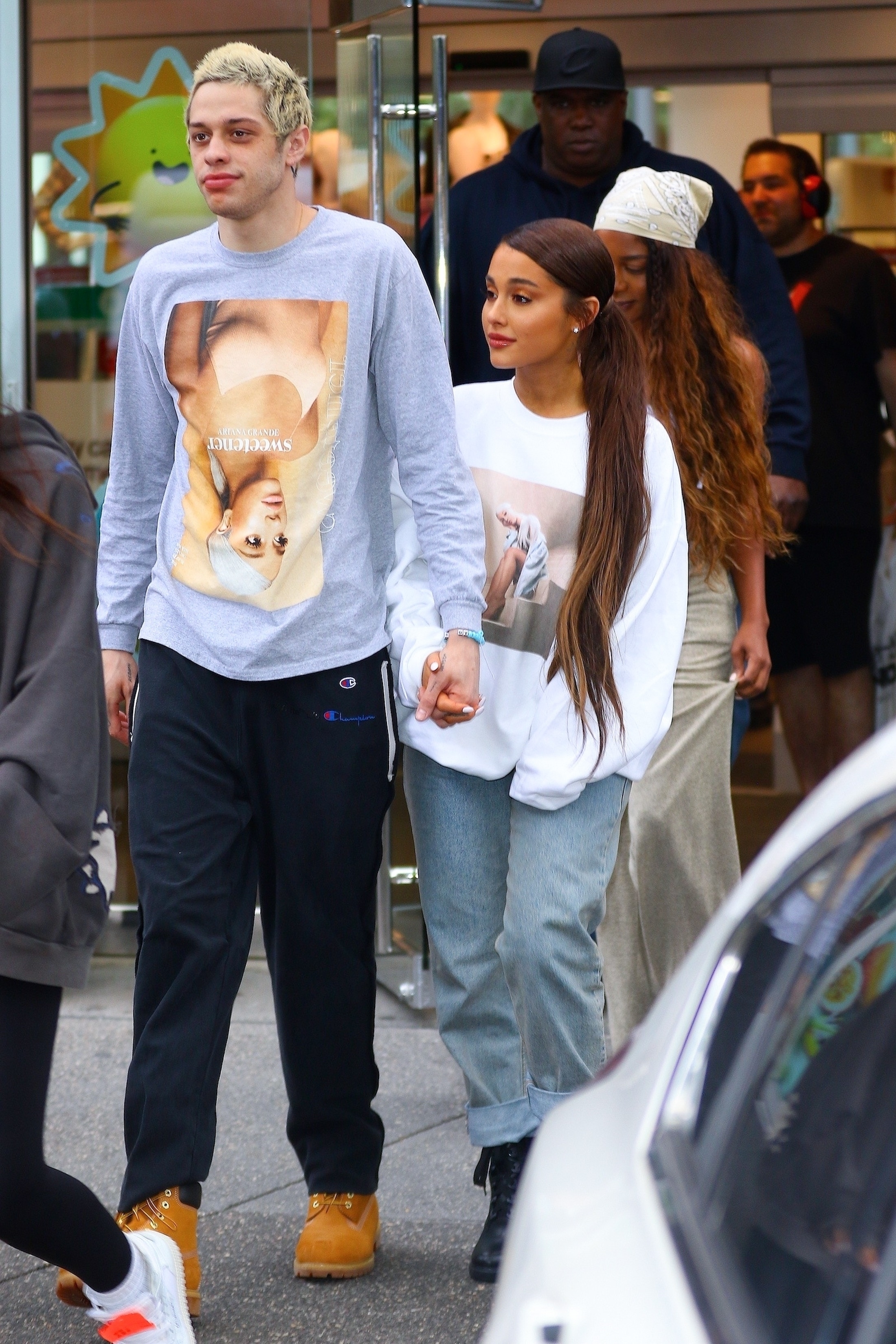 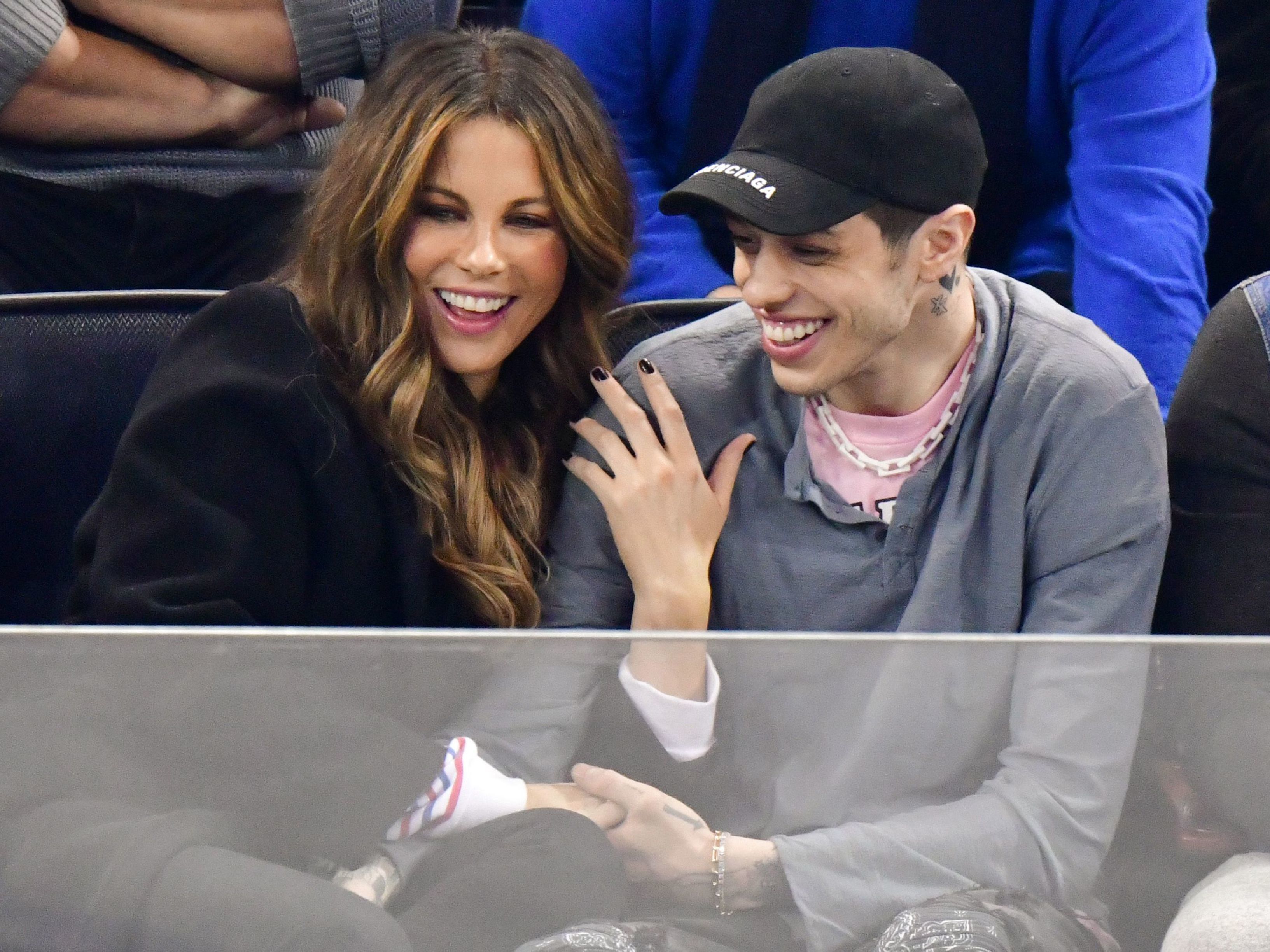 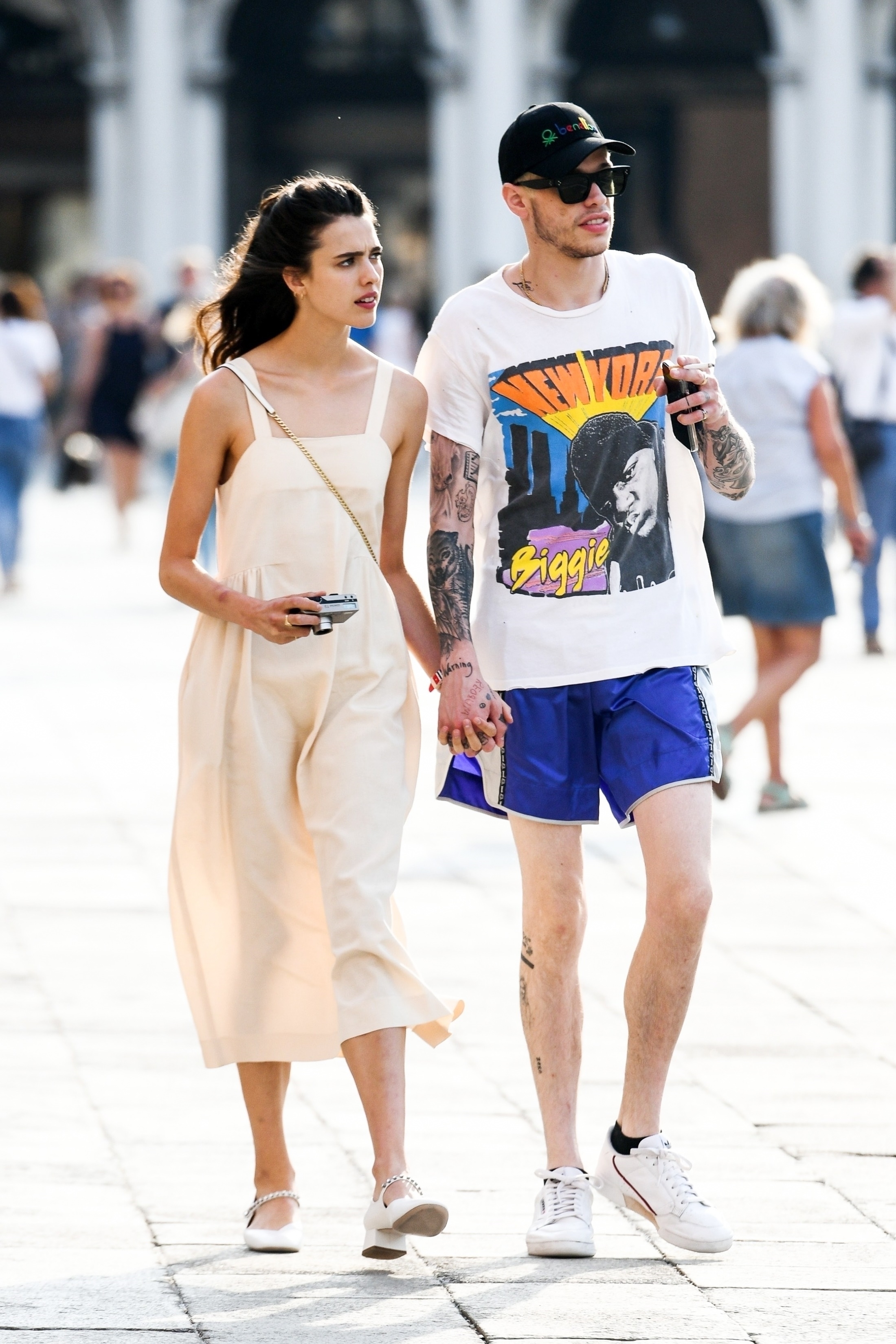 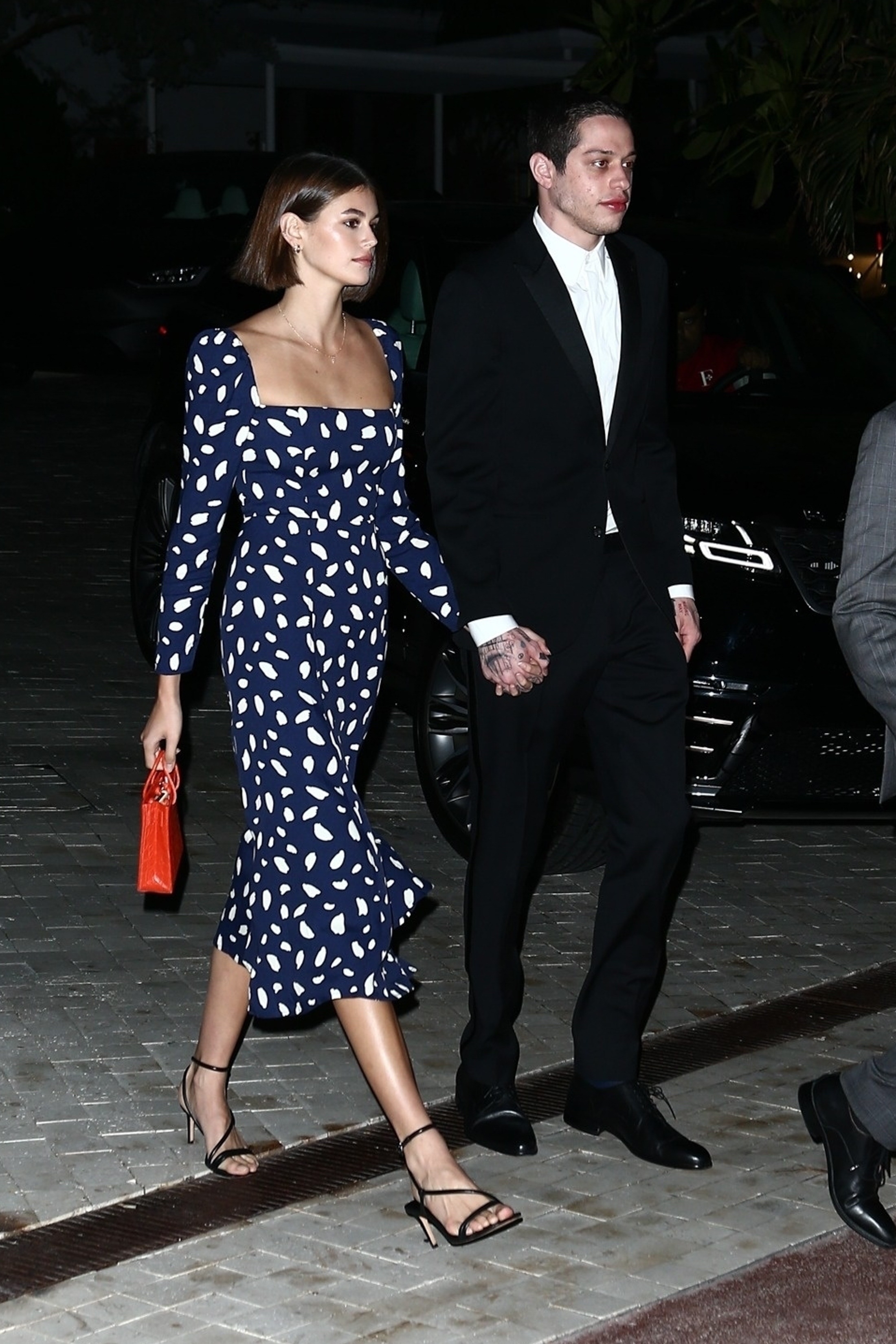 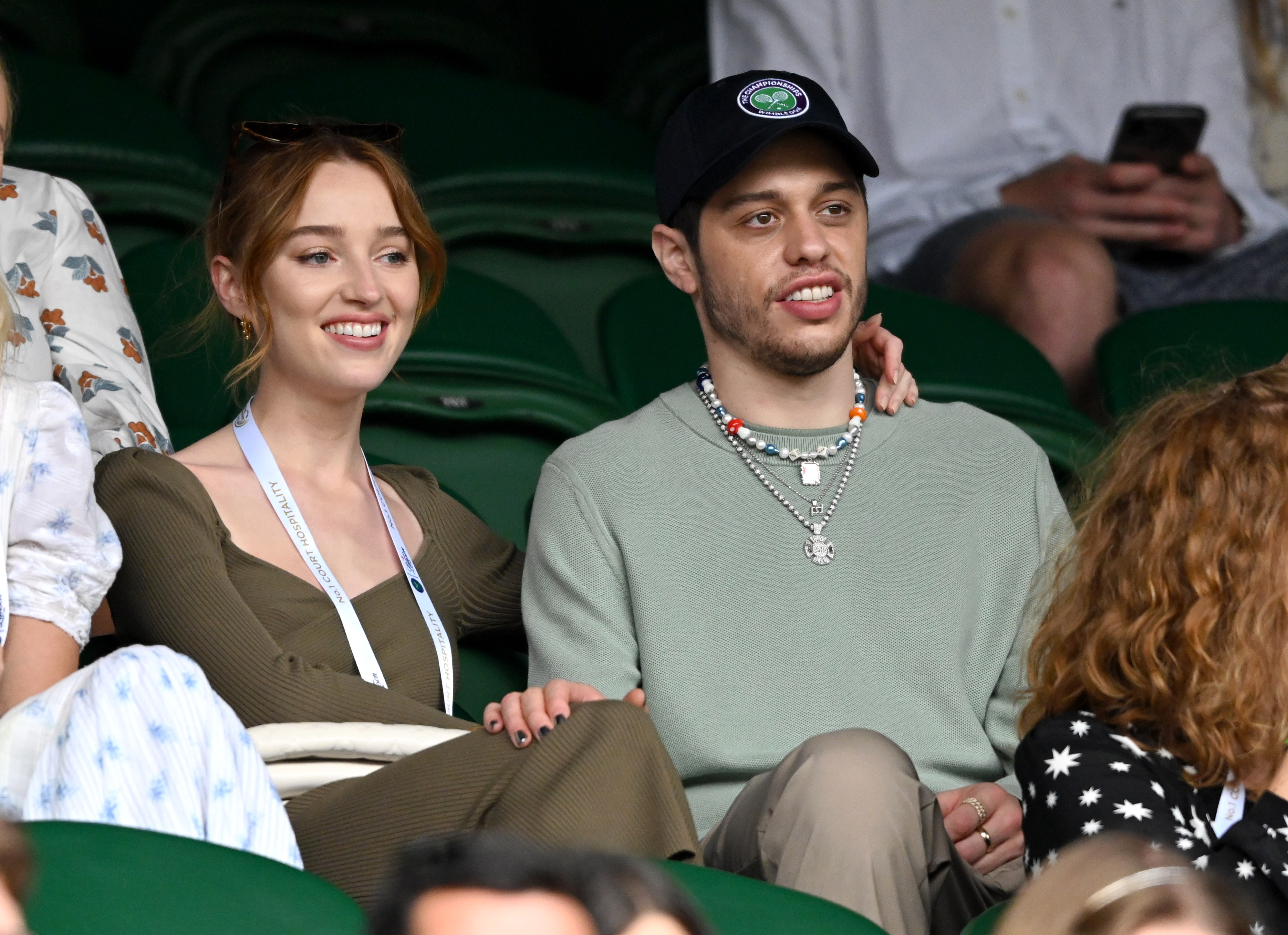 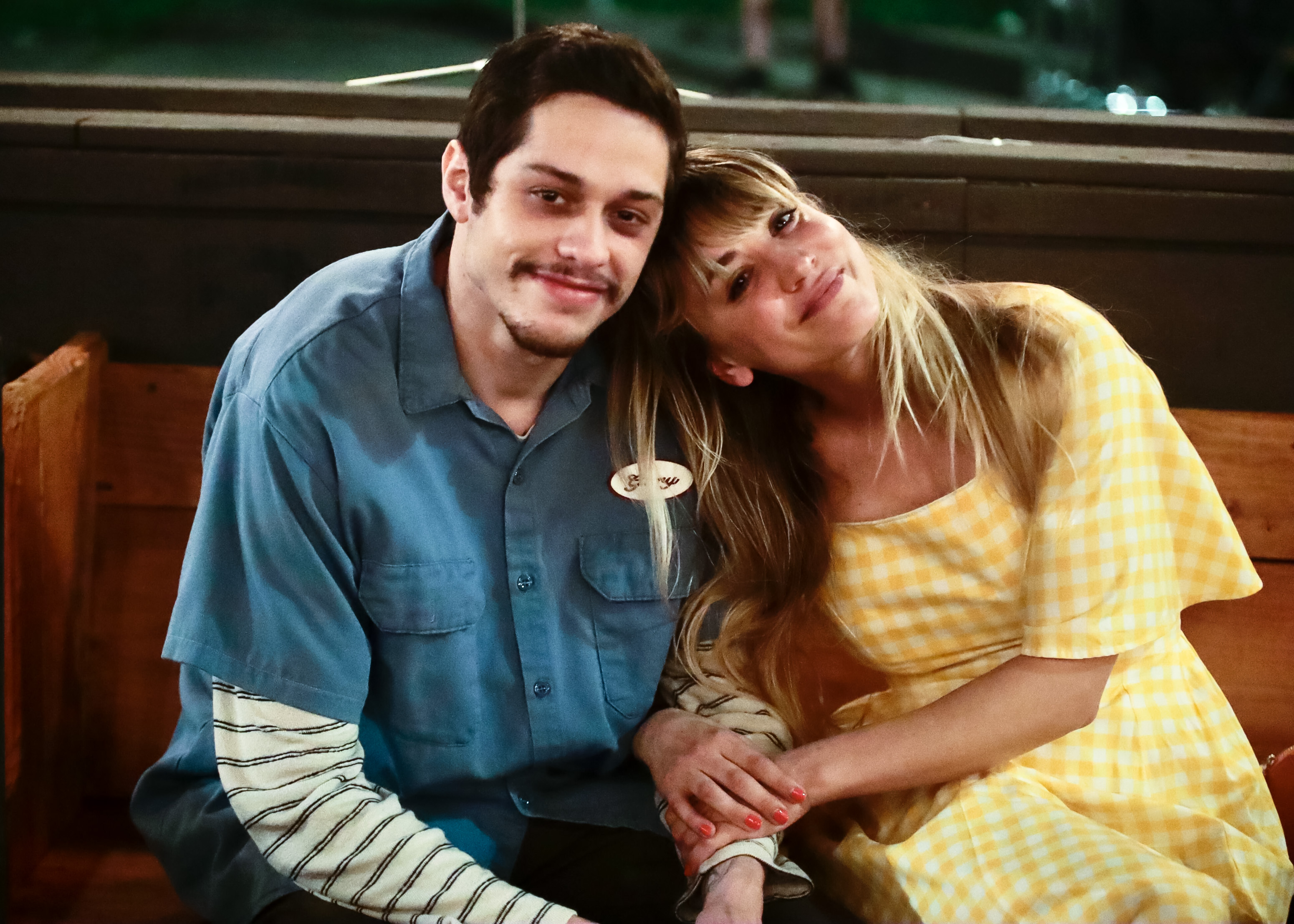 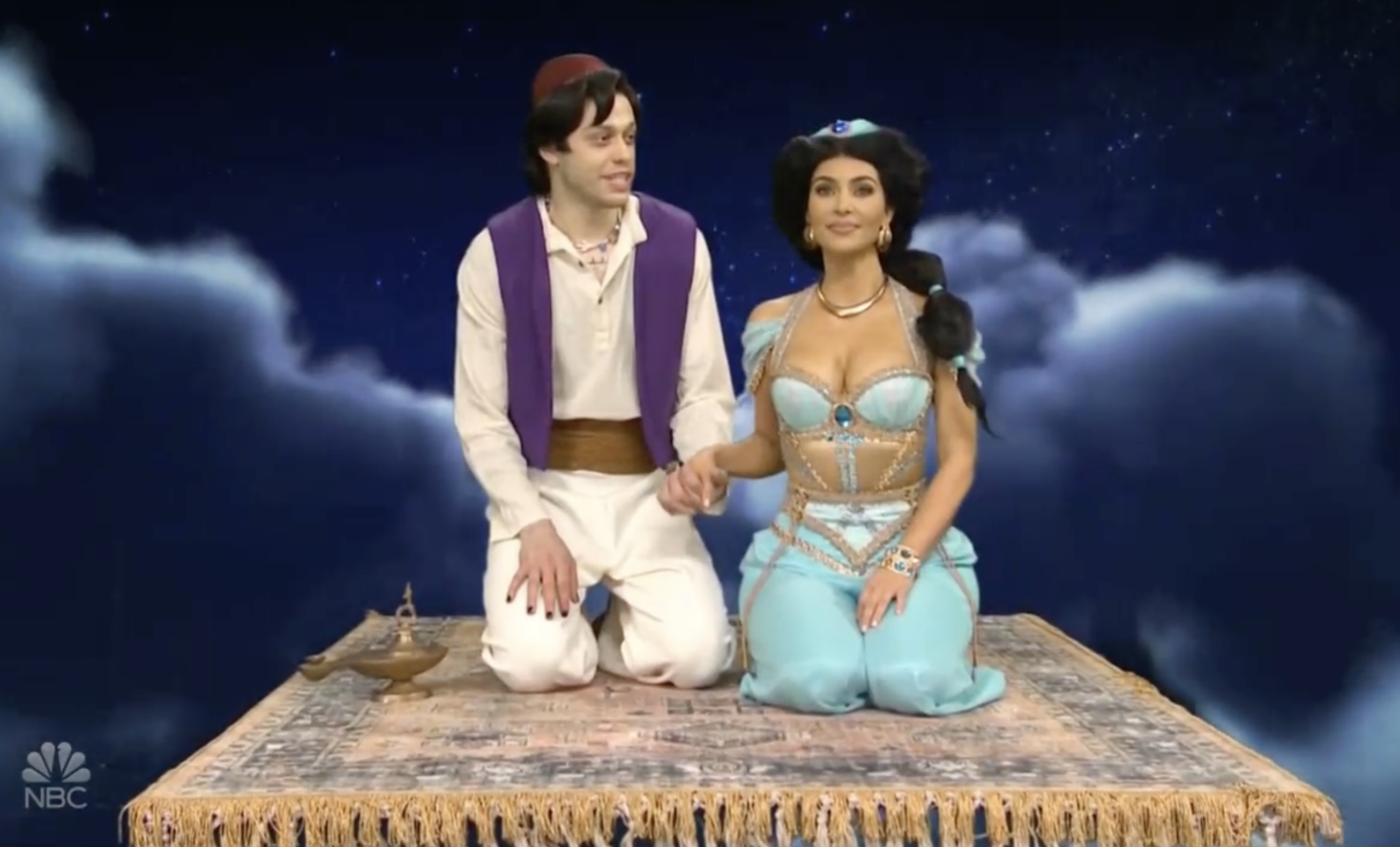 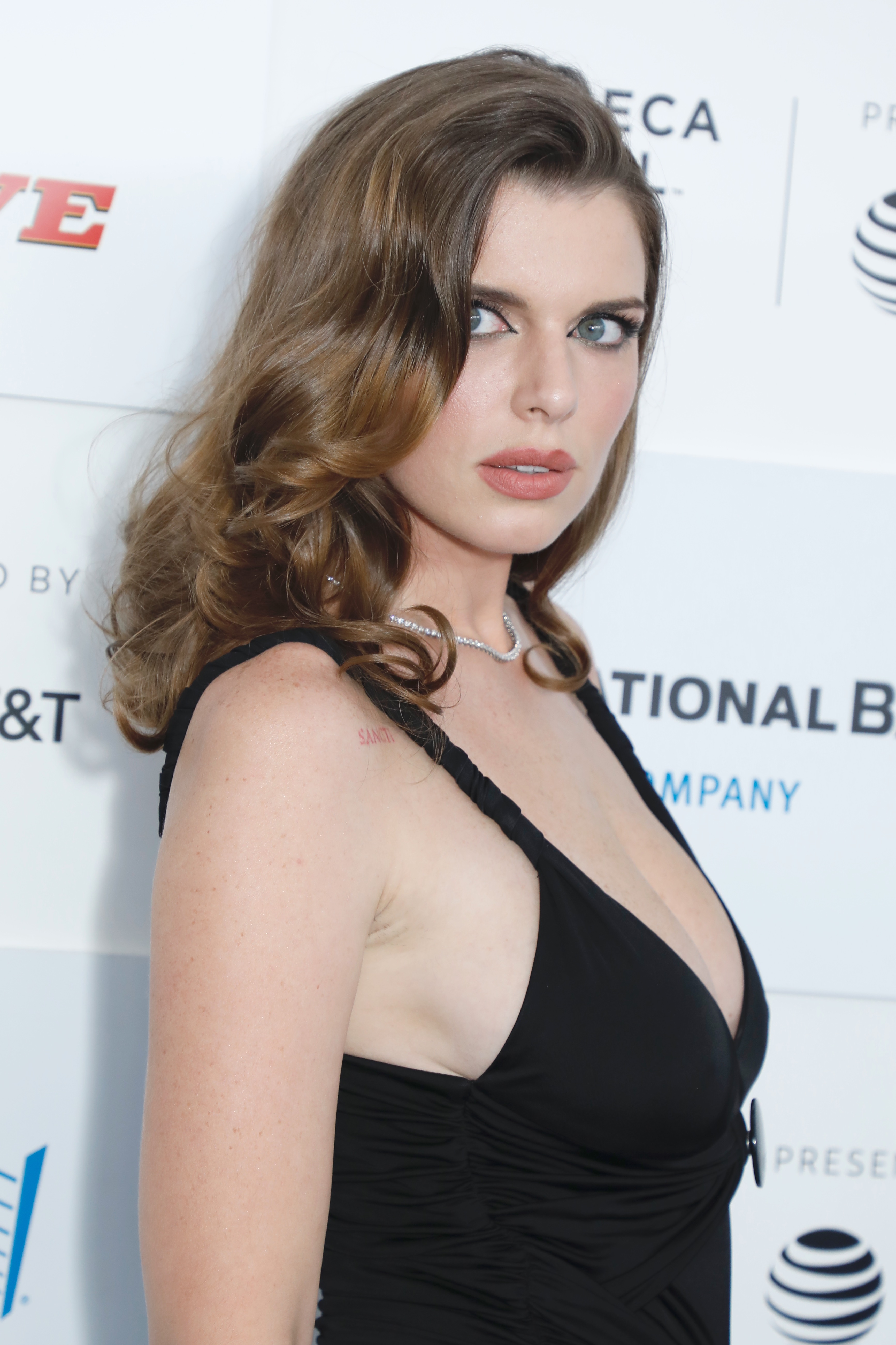