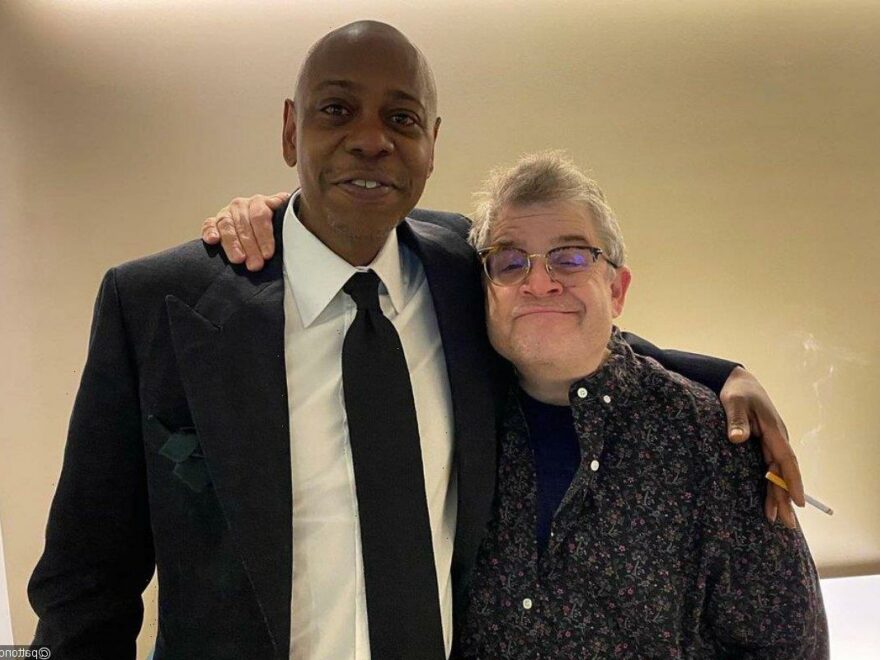 Some of Patton’s fans express disappointment after the comedian shares on his Instagram account that he performed together with the embattled star on New Year’s Eve.

AceShowbiz –Patton Oswalt received backlash after he shared on Instagram that he performed together with embattled comedian Dave Chappelle on New Year’s Eve. While some people thought it was such a bad idea considering Dave’s recent scandal over his transphobic remarks, Patton was quick to disagree.

In the said post, Patton shared some pictures with Dave during his last show of 2021 at a venue in Seattle. Unbeknownst to him, Dave apparently was performing next door so the Netflix star sent him a text, inviting him to come and did a drop-in set.

“Finished me set at @mccawhall and got a text from @davechappelle. Come over to the arena he’s performing in next door and do a guest set,” Patton wrote in the caption. The comedian went on to say, “Why not? I waved good-bye to this hell-year with a genius I started comedy with 34 years ago. He works an arena like he’s talking to one person and charming their skin off. Anyway, I ended the year with a real friend and a deep laugh. Can’t ask for much more.”

Upon knowing that Patton performed together with Dave, who landed in hot water over his comments which he made in his recent comedy special “The Closer”, fans of Patton expressed anger and disappointment. “Congrats you made it to such a lofty peak! Too bad you had to share it with a transphobe, though,” one of his followers wrote. “Did you take a moment to help him understand trans rights?” another person commented underneath the post.

“Disappointing because any support for Dave is more than he deserves at this point. He knows exactly what he is doing which is what makes it more offensive,” someone else similarly said. Another user also alleged that Patton’s “deleting comments criticizing him for hanging out with Chappelle,” adding, “I commented yesterday and now it’s just gone.”

In response to the backlash, Patton defended his performance with Dave in a separate post. Patton penned, “I saw a friend I hadn’t seen in a long time this New Year’s Eve. We’ve known each other since we’re teens. He’s a fellow comedian, the funniest I’ve ever met. I wanted to post a pic & an IG story about it – so I did. The friend is Dave Chappelle.” He added, “Thirty four YEARS we’ve been friends. He’s refocused and refined ideas a lot of us took as settled about race & history & Life On Planet Earth and spun them around with a phrase or punchline.”

“We’ve done bad & good gigs, open mikes & TV tapings. But we also 100% disagree about transgender rights & representation. I support trans peoples’ rights – ANYONE’S rights – to live safely in the world as their fullest selves. For all the things he’s helped ME evolve on, I’ll always disagree with where he stands NOW on transgender issues. But I also don’t believe a seeker like him is done evolving, learning,” he went on to say.

Patton also noted that it’s “impossible” to cut Dave off for they have known each other for so long. “Impossible not to be hopeful and open and cheer them on. Also, I’ve been carrying a LOT of guilt about friends I’ve cut off, who had views with which I couldn’t agree, or changed in ways I couldn’t live with. Sometimes I wonder – did I and others cutting them off make them dig their heels in deeper, fuel their ignorance with a nitro-boost of resentment and spite?” he continued wondering.

Calling himself “an LGBTQ ally” and “a loyal friend,” Patton shared that “there’s friction in those traits that I need to reconcile myself, and not let cause feels of betrayal in ANYONE else. And I’m sorry, truly sorry, that I didn’t consider the hurt this would cause. Or the DEPTH of that hurt. I’ve been messaging a lot on IG today, and the back and forth has really helped guide me in the writing of this.”

The funnyman also addressed deleting hate comments on his post. “I (naively) deleted a lot of posts in the comment thread – critical ones from LGBTQ writers AND s**t-posts by TERF/anti-trans orcs looking for clicks & giggles. I wanted a ‘nice comment thread’ about the pic with my friend. Ugh. So easy to think someone ELSE needs growth and miss the need in yourself. Gonna keep trying,” he concluded.

Some fans could see where he was coming and applauded Patton for his words. “This is so beautifully written. Thank you for taking the time to compose your thoughts, and yourself,” one fan commented. “This is beautifully said, Patton. I really appreciate the empathy and nuance you put into these words. Thank you for being a light,” someone else echoed.