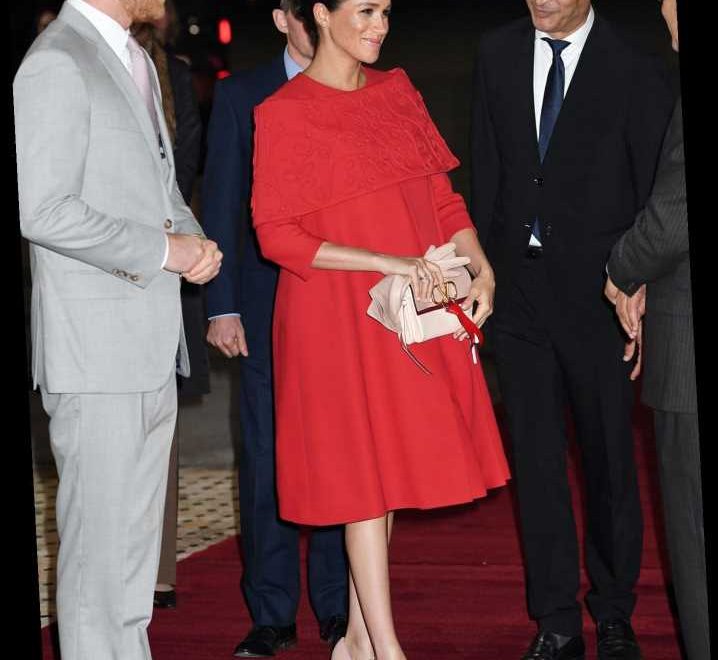 When Meghan Markle touched down with Prince Harry in Morocco in February 2019, she was wearing a red Valentino dress with an elegant embroidered cape detail. She styled her hair in a polished updo and carried a blush clutch, gloves and heels. No one does athleisure like Meghan at 7 months pregnant! Heading to catch her flight back to London from her baby shower in N.Y.C., she wore a sweatshirt, leggings and Adidas sneakers. She paired the look with a black baseball cap that had “Rectify” (her friend Abigail Spencer’s TV show) written across the front. When she made a surprise visit to New Zealand House in London to offer condolences following the Christchurch mosque terrorist attacks, Meghan wore all-black and accessorized with gold Boh Runga Discologo stud earrings given to her by New Zealand Prime Minister Jacinda Ardern during her royal tour with Prince Harry. At 8 months pregnant, Meghan prompted tons of “Jackie. O” comaprisons when she sported a 1960s coat by former Dior designer, Marc Bohan, to attend the christening of Zara Tindall’s daughter Lena in Gloucestershire. For the Commonwealth Day service at Westminster Abbey in March 2019, Meghan wore a cream coat with a matching Victoria Beckham dress and pillbox hat. During a visit to Canada House in London with Prince Harry, Meghan was glowing in a bespoke coat and dress by Erdem. For her appearance on an International Women’s Day panel, she sported a black-and-white swirl-printed shift dress with a high collar from the U.K. high street brand Reiss. She topped it with a black blazer and wore black pumps and carried a black clutch by Stella McCartney. To attend a palace party hosted by Queen Elizabeth, she opted for an Amanda Wakeley white coat over a metallic brocade knee-length dress. She paired the look with nude heels and a metallic clutch. At a reception at the King’s Residence in Morocco, the former Suits star wore a bespoke blue dress with flowing sleeves by Carolina Herrera. She pulled her hair back into a low bun to show off her stud earrings. When meeting the British Ambassador to Morocco, Thomas Reilly, Meghan looked regal in a bespoke dress by Dior featuring draped sleeves. She pulled back her locks, displaying her Birks Snowflake Snowstorm earrings.

Attending a gala performance of “The Wider Earth,” the Duchess of Sussex stunned in winter white, pairing a cream-colored turtleneck dress by Calvin Klein with a coat by Amanda Wakeley. Meghan wore a bespoke outfit by Clare Waight Keller for Givenchy, her wedding dress designer, when she attended the Endeavour Fund Awards in London. The look on Prince Harry’s face in this photo — and the print on Meghan’s black dress by Oscar de la Renta, which she paired with suede heeled boots — are both unforgettable.