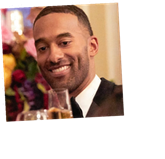 Matt James made history this past Monday night as the first-ever Black man to anchor The Bachelor.

Then, a short time later, he made history once again.

This time around, as the first lead of this franchise to share his thoughts on an attempted insurrection against the country he loves.

On Wednesday afternoon, thousands of Donald Trump voters stormed the U.S. Capitol in order to disrupt the electoral college certification process and to simply sow chaos within the government.

The building was locked down as a result and five people were killed.

Including a police officer.

The attack took place hours after President Trump encouraged these same supporters to walk up Pennsylvania Avenue… surround the Capitol… and refuse to accept the results of a free and fair election.

In response, many lawmakers have called either for a second impeachment of Trump and/or the use of the 25th amendment to throw him out of office.

“Yesterday, as we watched the riots take place inside our Capitol we’re reminded yet again we’re living in two different Americas.”

“As a Black man who saw how peaceful protestors were handled this summer, I know a group of black or brown rioters would not have been dealt with the same way,” James continued.

And, in a message Matt also posted on Twiitter, he concluded as follows:

We need to address the hypocrisy and injustice in our country to set a better example for the next generation.  I’m praying for America in 2021, and to say nothing is saying something.

This has become a common view among millions of observers.

As of this writing, only 52 people have been arrested from the mob of terrorists who committed their seditious act on Wednesday.

Videos have surfaced of police officerrs calmly escorting these individuals from the Capitol, which stands in stark contrast to the way cops and National Guard members reacted to the presence of Black Lives Matters protestors across the country last year.

James’ comments were especially notable because The Bachelor has come under continual criticism during its lengthy run for its resistance to feature a Black man as the lead.

The show in the past fought a legal challenge to feature Black leads… and has frequently been hit by charges of racism.

On the Season 25 premiere, James opened up about the pressure he feels as an African-American leading this program.

“My mom is white and my dad is Black, and I experience what it was like to be a product of interracial marriage,” James told host Chris Harrison.

“And it’s tough because you’ve got people who have certain views, old-school views on what a relationship and what love looks like.

“And you’ve got people who are cheering for you to find love.

Concluded James along these same lines:

It’s a challenge, that’s for sure.

Or will he be applauded for speaking out?

We’ll soon find out, we suppose.

In semi-related news, did you hear that Rachael Kirkconnell wins the show this season?!?