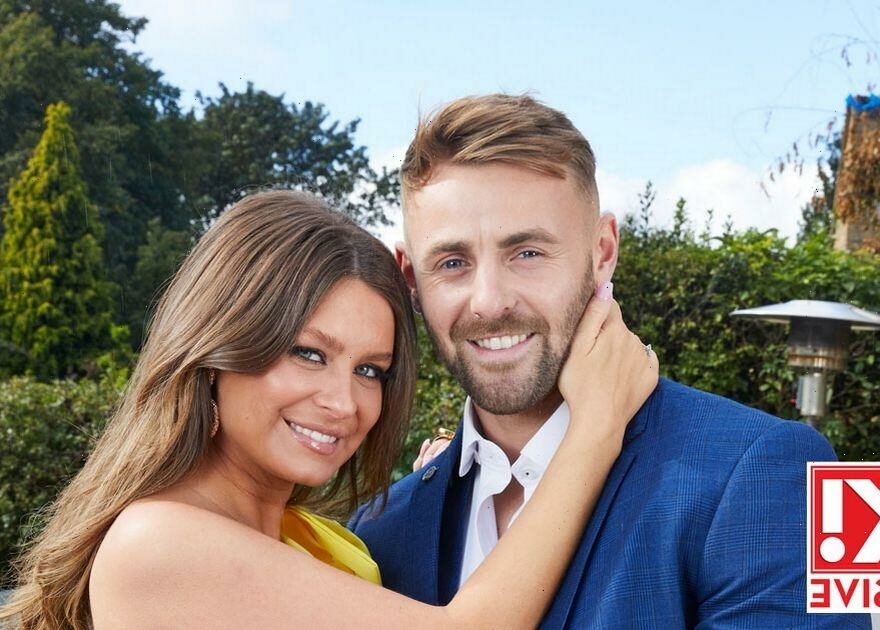 Fans of Married At First Sight UK were left on tenterhooks last Thursday when they tuned in to watch the show’s final commitment ceremony, only for a previous episode of the E4 show to be aired.

Thankfully, we were put out of our misery on Friday night, and were delighted (though not surprised!), to see that smitten couple Adam Aveling and Tayah Victoria chose to continue their relationship away from the experiment.

And we’re pleased to report that the couple are very much still together, and are planning their future – kids and all!

After meeting for the first time on their wedding day, electrician Adam, 26, from Doncaster, and estate agent Tayah, 25, from Hertfordshire, dropped the L-bomb just four days in – unlike some of the show’s other couples who clashed, fought and split with their matched partner (we’re looking at you, Morag and Luke!). When new catches up with the couple following our exclusive shoot, they’re bubbling over with love, with Tayah telling us, “I didn’t even think that someone like Adam could exist. Honestly, I never thought soulmates were real until I met Adam.”

Here, Tayah and Adam tell us about the new addition to their family, plans for babies, and why wedding bells will soon be ringing for a second time… Tayah, you’ve moved into Adam’s house in Doncaster. How is it going?

Tayah: I really enjoy living there. Being from Hertfordshire, which is quite close to London, it’s always been full of hustle and bustle. Whereas in Doncaster it’s very villagey and quiet and there’s lots of countryside.

I much prefer it. Also everything down south is extremely expensive, like the house prices, whereas here everything just blows my mind! It’s also very friendly up here.

Everyone has been so nice and welcoming to me, making sure I have settled in. It’s been lovely adjusting to everyday life with each other off camera. On the show, Tayah was very tidy and organised, and liked things to be in their proper place. Has she brought order to your bachelor pad, Adam?

Adam: Before she moved in I paid for a cleaner and now Tayah’s cleaning every single day. I’ve won the jackpot!

Tayah: Cleaning is one of my favourite hobbies, I just love it!

Tayah really didn’t like your decor and furniture, especially the coffee table…

Adam: It’s already gone – Tayah sold it straight away! She used the one thing she didn’t like as the selling point – that it lit up.

Tayah: I got more money for it than he’d originally paid for it, too!

Was it uncomfortable seeing some of the rows and bust-ups?

Tayah: We were there as a shoulder for people to cry on or to give them advice because we were so solid. I guess people were drawn to us to help support them as well. Adam: We didn’t have anything to work on between us, so we helped others. For instance, Bob used to come round every single day and also Morag – we chatted to them a lot. Luke was the same.

Did you feel it was right between you two from the very start?

Adam: On our honeymoon when we were playing tennis, we just had such a good laugh. I knew from that point onwards that she was someone I could fall in love with.

Tayah: I didn’t even think that someone like Adam could exist. Honestly, I never thought soulmates were real until I met Adam. I just feel very at peace in my life now. After the s**t I have been through in the past, I feel very blessed.

Unlike other couples, you didn’t seem to fall out much…

Tayah: There’s no point having big fat screaming matches. We just sit down and talk everything through. That’s the most important thing in a relationship – communication.

Adam: We’re both not aggy people, we both see each other’s point of view, so there’s no point fighting or arguing about things.

One of our favourite parts of the series was when we were left on a cliffhanger after you announced you two were “expecting”. Anything to tell us yet?

Tayah: No, it was a puppy we were expecting but it all blew up on social media with everyone asking if I was pregnant. We got a little cockapoo, she’s so cute.

She’s about six months old now. She was born two days after our wedding and is called River. She’s sometimes like an annoying toddler.

So has River been like a test run for when you have a baby?

Adam: It has felt like that, especially the first few weeks as River wasn’t keeping any food down. The carpets were just a bombsite. We started off making her sleep down in her cage but then she went into a bed and gradually she’s ended up in our bed!

Has parenting a puppy made you see different sides to each other?

Adam: Yes, when I see Tayah talking to River like a proper child, it does make you fast forward and think that’s what it will be like when we are parents.

Tayah: Having a puppy is like having a child at times, it makes you see what the future could be.

Tayah, you spoke onscreen about suffering a miscarriage in a past relationship, and you suffered some abuse online afterwards…

Tayah: I have felt quite overwhelmed at times. I don’t think anyone can prepare you for the fame side, but Adam’s been amazing and my family has too, so all that matters is what the people in my life know about me.

With such a personal subject like a miscarriage, the only reason I brought this to light on the programme was to help other people in a similar situation.

Adam: And you have had a lot of people reach out.

Tayah: Yes, it’s so amazing that I’ve helped other people. But there is a small minority that say nasty things. At the end of the day, that’s life.

Did you feel prepared for the fame side of things?

Adam: Not really, it is very strange. Even at the gym today, I had middle-aged men coming up to me and saying, “Are you the guy off the TV?” They were getting nervous talking to me, and I’m like, “I’m just a normal person!” Tell us about your plans for the future…

Adam: Well, at the vow renewal in the show I asked Tayah to properly marry me, so we are going to get married – we’re not too sure how it’s going to go yet.

Tayah: Because of Covid the venues are massively booked up, but we have got our hearts set on where we got married in the programme, so we would love it to be there officially. Honestly, it’s been so natural between us, he’s like my best mate.

Congratulations! Did you know Adam was going to propose during the vow renewal?

Tayah: We had spoken about him properly proposing to me.

Adam: She’d even sent me a picture of the style of ring she liked so I had something to go on.

Tayah: But I didn’t know it would happen at the vow renewal!

And how were your friends and family about it all?

Tayah: They couldn’t be happier for me. They’ve seen me go through crap in the past and now they’re seeing me with someone they like so much.

And what about babies – any plans?

Tayah: For me, I’ve come from quite a small family – I literally only have three cousins and an older sister. I’ve always grown up wanting to have four children.

Adam: If we were financially sound then I’d say four definitely but, if not, maybe three!

How’s your mum been, Tayah, as on the show she initially seemed wary about the whole thing…

Tayah: She honestly couldn’t be happier, now that she’s spent time with Adam and I and can really see the love that we have. She adores Adam so much.

Adam: She’s always been very welcoming to me, the whole family have been.

What about your dad? He refused to go to your onscreen wedding…

Tayah: My dad absolutely loves Adam and they get along very well. He is very happy with how it has turned
out for us.

We’re so pleased for you both too – talk about couple goals!

Adam: We are so easy in each other’s presence. When I go out with all my mates, I’m exactly the same person as I am with Tayah with them. She’s really like my best friend.

Tayah: My friends love Adam. It’s so refreshing to know that he can hang out with them and I love hanging out with his friends as well.

Adam: She can hold her own in a group of lads!

Sadly, it didn’t work out for everyone on the show, but it seemed like you made some friends for life…

Tayah: For me it was Bob, Megan and Morag.

Adam: My best mate from the show was definitely Bob. We have a proper good friendship. We still FaceTime each other like every single day.

Tayah: We can’t get rid of him!

Adam: He’s coming up to visit us soon.

We wish you all the best for your future – bring on the second wedding!

Tayah: Thanks so much, we have had the best time ever! It’s changed both our lives for the better.

The entire series of E4’s Married At First Sight UK can be streamed on All 4. To read more about the MAFS UK cast's lives after the show, sign up for OK!'s daily newsletter here.