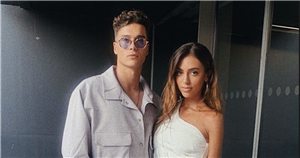 Made in Chelsea stars Ruby Adler and Miles Nazaire were seen looking cosy when they were photographed outside London's Tate Modern for a film premiere last month.

Now, the stars have added fuel to the romance rumours as Ruby posted a snap of two glasses of red wine as they enjoyed a daytime drink together on Sunday.

While Miles wasn't in the picture, Ruby wrote alongside the picture on her story: "@milesjnazaire," with a kissing face emoji.

Fans first speculated the pair were dating when Miles, 25, and Ruby, 24, attended the premiere last month.

Miles gushed that Ruby was "glowing as usual" as he documented their evening together.

He said on the clip: "Oooh hello! Someone's looking beautiful. You ready for this Marvel film?"

"I think I'm ready," Ruby replied as she smiled at Miles before the film began.

After the event, Miles shared a snap of the two of them on his Instagram with the words: "Had such a beaut evening with @rubyadler," with a red love heart.

Ruby – who was previously dating Reza Amiri-Garroussi on the hit show – also shared a snap of Miles on her Instagram story, alongside the caption: "Fancy seeing you here @milesjnazaire."

"Ruby come get ur man," one fan commented after Miles posted snaps on his Instagram grid of their evening together.

The most recent series of Made in Chelsea ended with Miles asking Ruby out on a date.

After she split from Reza, the show finale saw her sitting across from Miles as she explained: "Well I'm not with Rez anymore," as he responded: "No, you're not."

She replied: "Yeah, I would go for a drink. So are you asking me on a date?" before he said: "I'm asking you on a date." One fan tweeted: "Ruby and Miles actually look good together #MadeInChelsea," followed by an upside down smiling face emoji.

Another posted: "Miles is soooo damnnn fineeee I love him and Ruby together #MadeInChelsea".

Ruby was dating Reza in an on-and-off relationship for 10 years.