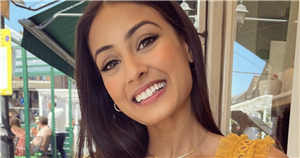 Priya Gopaldas showed fans exactly how she responds to trolls after she was sent a cruel message from one.

Love Island beauty Priya, 23, was cruelly body-shamed by a troll who slid into her DMs over the weekend.

The cruel troll left an abusive message to the medical student saying she is "absolutely disgusting to look at".

Priya's troll also branded the medical student a "stupid tory b***h" and "all bones and no flesh".

But, stunning star Priya refused to give in to the troll and used the opportunity to try and educate them.

She wrote a message which said: "Looking at your Instagram you're clearly a beautiful girl! As women we should support each other and instead of body shaming we should try to stay kind.

"I love my body because it allows me to run far and be strong. Sometimes criticism like that can be damaging to a woman's confidence and make them feel like they need to change themselves with surgery or by eating badly when actually we're all uniquely beautiful."

Priya, who recently donated her Love Island pay cheque to an NHS charity, then ended the note with: "Hope you have an insightful bank holiday."

Priya shared her response on her Instagram story and insisted it was the one and only time she would react to a troll.

Unfortunately, Priya isn't the only Love Island star to have been on the receiving end of hateful messages after appearing on the show this year.

Casa Amor beauty Lillie Haynes,who was seen holding hands with Jack Barlow recently, was told to "watch her back" in a horrifying message.

Last week, Lillie shared a screenshot of the barrage of abuse she had received from one user after Millie Court and Liam Reardon were crowned the series winners.

The messages read: "Your smile on that recent post is just pure ugly

"Absolute ugly b***h you have nothing going for you

"You legit look like a man with a wig on that recent post", followed by a string of laughing face emojis.

In a later string of messages the anonymous user wrote: "You're in Manchester [thinking face emoji] better watch your back b***h

"You look like a man" the troll went on before adding: "With a bad wig on".

Lillie hit back at the string of abusive messages as she said: "As per my previous post…Majority of my DM's are so lovely and I always try and focus on you sweet angels who are sending me positivity.

"To be threatening someone you've never met absolutely blows my mind.

"I'm still so new to this world of exposure and I'm learning along the way what's worth to address and what's not. This one I feel passionate about."

She then added: "A man in a wig is f***ing beautiful, so if you want to try insult me, try harder.

"I am a huge LGBT+ supporter and you know what little t***ys are sexy too."

Stay up to date with all the latest news on all the Love Island stars by signing up to OK!'s daily celebrity newsletter.