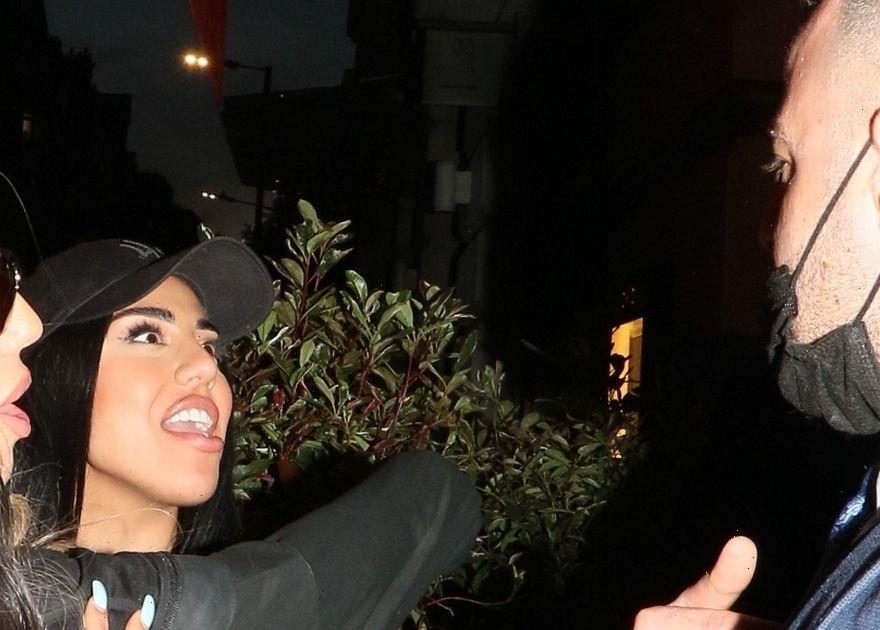 Anna Vakili and her sister Mandi have been photographed getting turned away from a celebrity hotspot during a night out in London.

Former Love Island Anna star, 30, and 29 year old Mandi were seen attempting to get into Novikov in swanky Mayfair on Tuesday night to no avail.

The pharmacist and make-up artist were seen talking to a member of the door staff as they attempted to get into the bar and restaurant, which is regularly frequented by Premier League footballers.

Unfortunately, the sisters didn't have a table booked at the establishment, meaning they were not able to get past the bouncer.

Anna seemed unfazed by their refusal and laughed as she headed away from the restaurant wearing a figure-hugging cream jumpsuit, putting the hood of her leather jacket up over her head.

Mandi looked equally as glamorous in a black jumpsuit, which she teamed with a blue denim jacket and a black baseball cap.

Last month, Anna revealed she has stopped having filler in her nose, chin and cheek bones as she opts for a more natural look.

She told The Sun: "I used to get filler in my cheek bones, and I haven't had that for a while.

"I used to have a little bit of filler put into my jaw – so all of these things I've stopped. My face is going a lot more back to how it naturally looked."

Despite deciding to strip back, one thing Anna said she can't stop doing is getting filler in her lips.

She continued: "I think for me I've gone a lot more towards the natural look, but lip fillers for me are the one thing I can't resist, because I think it suits my face to have bigger lips, but I won't go overboard like I used to.

"Sometimes I look back at old photos and videos and think wow – I was so over the top.

"The other day I went to get fillers in my lips, and when I got there the lady said, 'Let me put a tiny bit in your nose', and at first I didn't want to, and I was a bit scared, but she insisted, and I thought you know what – I might as well do it because I'm up for trying new things.

"No-one even notices the difference unless you saw me on a day-to-day basis, and even then it's so difficult to tell," Anna divulged.