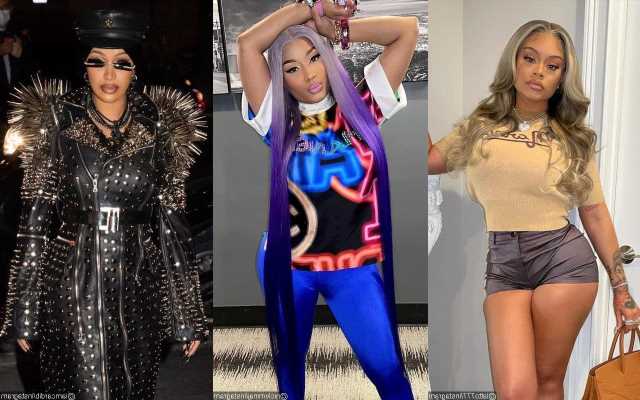 After firing back at the hater, the ‘Queen of Da Souf’ femcee continues to tease the individual by sharing a video of her wearing a blonde wig and calling herself ‘Latto Minaj.’

AceShowbiz -Latto (Mulatto) insisted that she loves both Nicki Minaj and Cardi B regardless of their beef. After being attacked by one troll for mentioning Nicki’s name while she’s working with the “WAP” hitmaker in “Bruised“, the “Big Energy” femcee set aside time to fire back at the hater.

“Y’all are weird af lmao I thanked Cardi for what she’s done for me & I said what I said!!” the 22-year-old musician raged on Twitter on Friday, November 19. “I’ve been very vocal about loving them both so suck my d**k I’m fine without a ft I don’t pay homage just to get a ft.”

Latto’s angry tweet came after one individual called her out. In a since-deleted post, the critic argued, “@Latto stop d**ksucking mentioning Nicki for bait bih and try to say sideway a** bs!! When you work with the next bih.. outta being Bitter cause she still ain’t said s**t to you or work with you! Being a snake!”

Hours later, the “Queen of Da Souf” artist sent out a TikTok video in which she raps to Kali‘s “MMM MMM” remix, which features herself and MoneyBagg Yo. Alongside the clip, in which she’s seen wearing a blonde wig, she wrote, “Latto Minaj.”

After a fan remarked that Latto was trolling the hater by sharing the video, the femcee explained, “Cause literally it’s not that serious. I doubt Nicki & Cardi even care this much lmao.” She added, “I luv them both & yes I’d love to collab w BOTH artists but I promise I’m not gone die if I don’t get a feature from either of them. Sorry ima real b***h 1st & they ‘beef’ don’t concern me.”

However, Latto was once again dragged by another online troll, saying, “btch sit down.. the way y’all use her for clout when y’all drop music is sad, if y’all don’t find fake barb pages to argue w/ y’all name drop her for traffic, imagine how tired we are.” In response, Latto penned, “Bro I said Latto Minaj cause I’m moving like her & making facial expressions like her…. In a blonde bang bob.”

Latto then made it clear that she doesn’t “blame any ‘fanbase’ as a whole.” She went on to note, “I’m talking to whoever talking to me. Now I’m done addressing this or mentioning anyone name good or bad. Y’all win.”