Months into Kim Kardashian’s split from Kanye West, a source tells HL EXCLUSIVELY that the SKIMS founder has turned to older sister Kourtney for advice.

Kim Kardashian, 40, and Kanye West, 44, are entering new territory as co-parents — and the KKW Beauty mogul has turned to her sister Kourtney Kardashian, 42, for some advice. “Kim and Kanye have figured out how to co-exist as parents and she has really learned that from her sister Kourtney,” a source tells HollywoodLife EXCLUSIVELY. Kourtney, of course, has been actively co-parenting her kids Mason, 11, Penelope, 9, and Reign, 6, with ex Scott Disick, 38, since their 2016 split. Meanwhile, Kim and Kanye share North, 8, Saint, 5, Chicago, 3, and Psalm, 2.

“[Kim and Kourtney] have so many conversations because Scott and Kourtney had a roller coaster relationship, but they have found a great way to co-parent. Kim has really looked up to her sister and has taken advice and has incorporated it into her co-parenting relationship with Kanye,” the insider explained. Notably, Kourtney and Scott began their on-again relationship back in 2007 — seemingly splitting for good nearly a decade later. Despite not being together, Scott maintains that he’s “in love” with the Poosh founder — making it known in several episode of Keeping Up With The Kardashians. 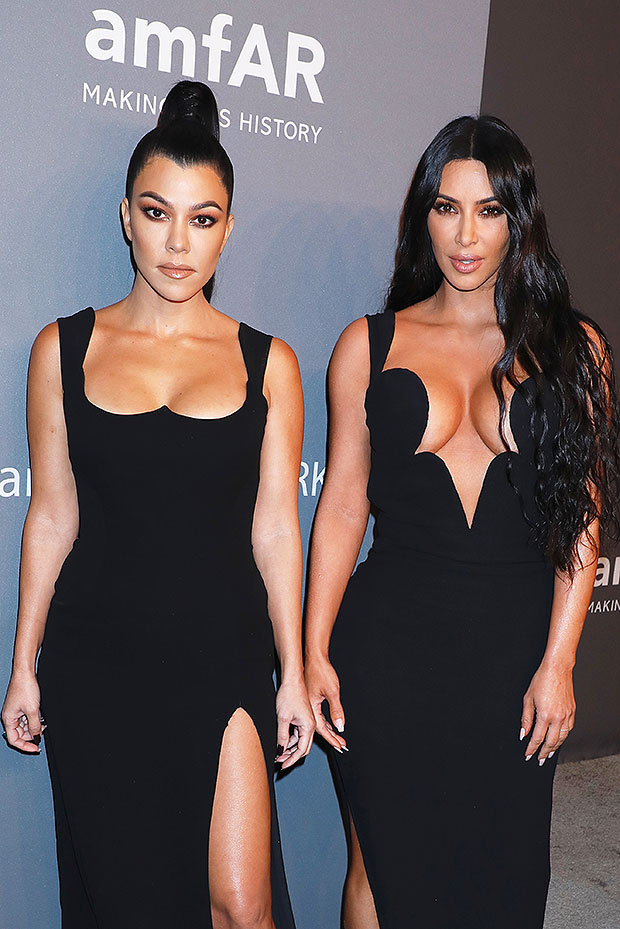 While Kim and Kanye’s relationship wasn’t as tumultuous as Scott and Kourt’s early days, the Yeezy designer and SKIMS founder have certainly had their ups-and-downs amidst his mental health struggles. Kim spoke out publicly about Kanye’s bi-polar diagnosis after he made controversial remarks at a South Carolina rally as he pledged to run for president of the United States against Donald Trump and current President Joe Biden.

“[Because] Kim and Kanye have to be in each other’s lives forever one way or another Kim feels it is best to be on the best of terms as possible and she works hard every day to make that the constant in her world,” the source says. “She knows she can’t move forward if there are still issues from the past, so working with Kanye is key to all future successes.” Recently, Kanye took their four kids to Mexico while Kim enjoyed a work trip to Rome, Italy with her business associates — including Tracy Romulus — and other members of her glam squad.

“Kim was in Rome to explore and hang with her friends. Kim needed a reset after Kanye and everything and she’s embracing single Kim and her friends,” another source tells HL. “Loving on herself, wearing her old Kim K looks (many that Kanye didn’t like), putting herself back out there and just [being] focused on herself,” they added, referencing Kim’s ultra-fashionable looks on the getaway. She stunned in nearly every ensemble, including a white lace dress to the Vatican, all-tortoise inspired look at the Trevi Fountain, and a gorgeous all-white swimsuit and Fendi leather skirt combo at the Spanish Steps. Kanye was also recently in Europe with new flame Irina Shayk, 35, to celebrate his 44th birthday.

Despite Kim and Kanye’s past struggles — which also included a number of controversial tweets pertaining to Kim, her mom Kris Jenner, and others — the insider says that the duo are co-parenting “really well” through the split. “The most important thing to them are their kids and making sure they know they have loving parents and a strong home base. Kanye and Kim share that in common,” they explained. Kim primarily resides at the family’s home in Calabasas, while Kanye has been spending most of his time on his massive Wyoming ranch in recent months. “Overall, they are on OK terms. They chat and keep it simple. Kanye is used to doing his own thing, so that’s exactly how he’s handling this and being supportive to his kids, but he knows [he and Kim] are no longer on the same wavelength,” they explained.