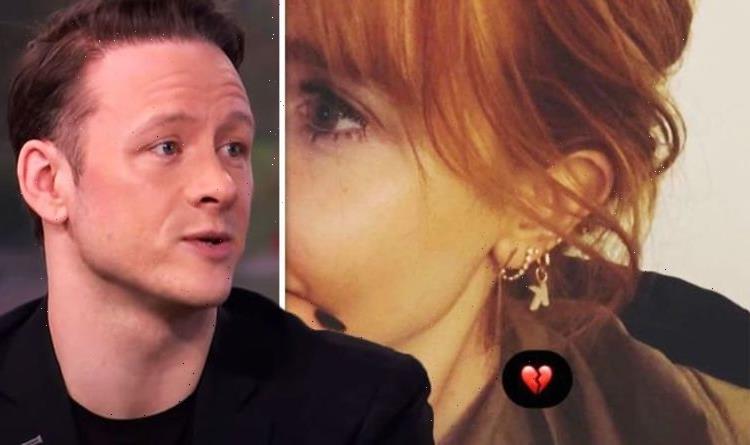 Strictly Come Dancing star Kevin Clifton, 38, has taken to Instagram to share his “heartbreak” after his girlfriend Stacey Dooley posted a sweet picture in tribute to her beau. The BBC journalist posted a glamorous snap of her personalised earrings which she donned in honour of her dancer boyfriend as he took to the stage to perform in the West End today.

Finally @sjdooley came to see Singin In The Rain

Wearing her signature fiery locks in a chic low bun, the star styled her fringe over her forehead in view of her 990,000 Instagram followers.

Looking pensive, Stacey leaned on her hand and covered her face as she showed off her gold ear jewellery.

The star flaunted her multiple piercings, but the one piece that really stood out was a gold, letter ‘K’ pendant that dangled from her ear.

Upon seeing his girlfriend’s story, Kevin reposted it for his 357,000 followers to see, with the addition of a broken heart emoji.

Kevin is currently appearing in West End musical Singin’ in the Rain at the Sadler’s Wells theatre in London.

Two weeks ago the former Strictly star revealed that his girlfriend “finally” made it to the theatre to watch him perform.

Posting a sweet snap of him and his flame-haired girlfriend sitting on a sofa together, Kevin beamed with pride as he posted a series of snaps with Stacey.

“Finally @sjdooley came to see Singin’ In The Rain,” he wrote alongside a heart emoji.

Stacey also posted the same snap, writing: “Me showing off my clever boyfriend at 2am.”

The couple’s celebrity friends flocked to the comments to support the star in his musical endeavors.

A month ago Stacey penned an emotional message to her beau as he starred in the opening night of the musical.

Alongside a sweet snap of her and her boyfriend, she wrote: “Good luck tonight sweetheart. Opening night!

“SO proud. You were made for this role. Make ‘em laugh King Kev,” she finished.

While Kevin has been busy on stage, Stacey has taken the time to decorate their London home.

The star has turned her hand to interior design which fans have dubbed “Dooley Style”.

Stacey isn’t shy when it comes to showing off her artistic flair and minimal but chic vision for her shared space with Kevin.

The duo met when they were paired together for the sixteenth series of Strictly.

After winning the coveted glitterball trophy, they confirmed that they were dating in 2019 with a loved-up post on social media.

Kevin has previously been married twice before, including to Strictly pro dancer Karen Hauer.

The couple were married for three years before splitting in 2018.