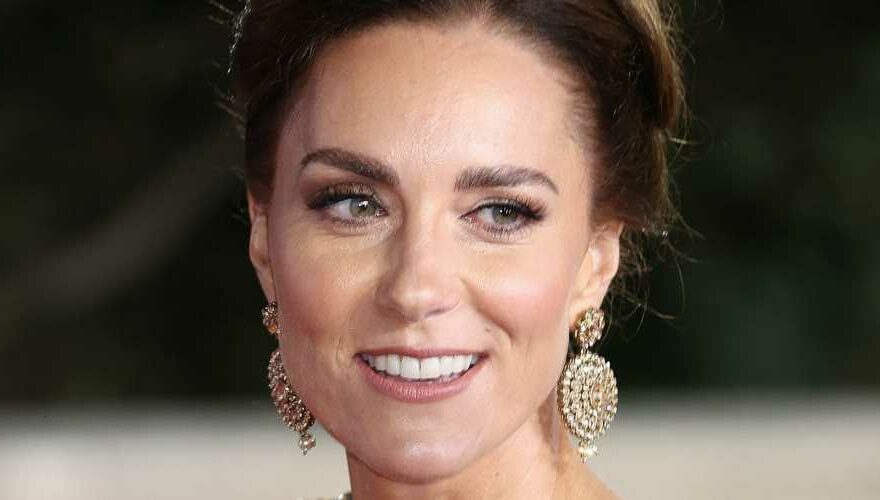 Following delay after delay, Daniel Craig's final turn as James Bond is hitting theaters soon — and fellow British icons Kate Middleton and Prince William (along with Prince Charles and Camilla Parker Bowles) made an appearance at the No Time to Die premiere at London's Royal Albert Hall, injecting some much-needed glamour and glitz into the headlines. For the occasion, Kate wore a sequined gold gown with allover embellishment. The screen siren-worthy dress included strong shoulders and a cape, which glittered just like the dress itself with a sunburst-patterned sequin design.

Middleton wore her hair in a relaxed updo and paired the spotlight-stealing dress with bold, dangling earrings and her signature natural makeup. In true Bond fashion, William wore a classic tuxedo. People reports that the Cambridges and the Prince of Wales were guests of honor at the event and that Jenny Packham designed Kate's gown, proving that the duchess is sticking to her go-to designers now that big events are on the docket again.

Of course, the royals weren't the only big names in attendance. Daniel Craig along with co-stars Rami Malek, Léa Seydoux, and Lashana Lynch walked the carpet as well as Phoebe Waller-Bridge and Billie Eilish and Finneas O'Connell, who had the honor of handling this movie's theme song, aptly titled "No Time to Die."

The palace also said that many healthcare and frontline workers were also invited to thank them for their "extraordinary contribution to the nation's response to the COVID pandemic."

Charles serves as patron of The British Film Institute, which archives important films and works to provide access to TV and movies to everyone in the U.K. William is also doing his part to share the importance of movies, serving as president of The British Academy of Film and Television Arts (BAFTA) since February 2010.