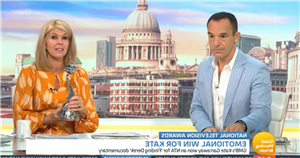 Kate Garraway was back in her chair on Good Morning Britain this morning with co-host Martin Lewis after her glitzy night out at the National Television Awards, sponsored by OK!, where her documentary, Finding Derek, won the gong for Authored Documentary.

She spoke on the ITV breakfast show about her emotional call to her husband Derek to tell him the “bittersweet” news that the documentary won.

Finding Derek followed Kate, 54, and children Darcey, 15 and Billy, 12, as they coped with her husband Derek Draper, 53, falling ill with Covid-19 last March and the lengthy recovery the family have been through this past year.

To get all the latest gossip from the NTAs 2021, sign up for OK!'s daily newsletter here.

Kate had a video call with Derek after her win from the hotel room she stayed in to be near the GMB studio for her early morning role on the breakfast show.

She shared how the couple’s daughter Darcey woke her dad up and he was a bit “bewildered” when Kate called but he was “so happy” and was “very happy that [Kate] was happy”.

She told viewers of GMB: “I think the reason why it perhaps did do well is because everyone’s had a slice…everyone’s had a Derek in their life, or a Darcey, or has lost someone…”

She continued: “Hopefully this is for everybody that has been going through the pandemic.”

Kate spoke about her husband Derek, as she said: “He had been struck down hard by Covid, he is free of the virus and has been for a long time but the damage that has been inflicted to the organs in his body from the top of his head to the tip of his toes, that even though thank god he’s still with us and at home, the recovery is still very slow and you still feel him fighting to try – and of course so many people to help him in his fight and to thank, and all his family – it has been very tough."

The mum-of-two went on: “Of course, it was bittersweet last night, he wasn’t really well enough to come, there wasn’t really any question of it and I was actually in such a daze as I didn’t expect to win that I went up on stage completely bewildered which won’t surprise you.

"Struggled to get some words out, then went backstage and eventually when I got home realised I didn’t have a single picture with the award or with the team at the awards.”

The popular TV host shared a picture on Instagram of her call with Derek and he can be seen smiling as she shows him the award.