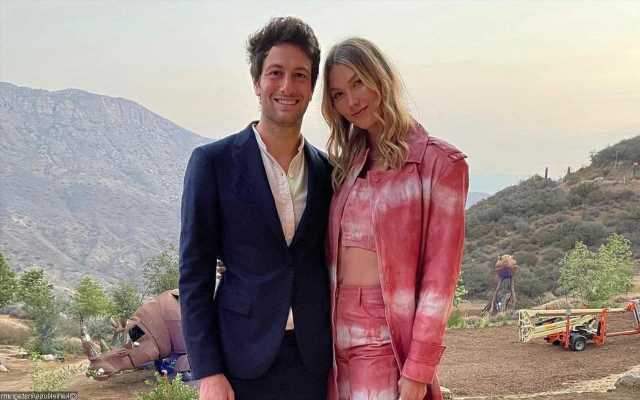 In a new interview, the 29-year-old beauty, who gave birth to her and Joshua’s first child Levi earlier this year, also talks about loving her post-baby body.

AceShowbiz –Karlie Kloss made an adjustment in her life following her marriage to Joshua Kushner. The 29-year-old model revealed in a new interview that she had learned to stay away from comment section after she tied the knot with the brother of Jared Kusher, who is the husband of Donald Trump‘s daughter Ivanka Trump.

“I’ve learned to stay away from the comments section,” Karlie told WSJ. Magazine in an article published on Tuesday, December 7. “I just try and… speak out on things that I am authentically passionate about.”

The mom of one added, “I live my life and try to show my values through my actions.”

Karlie was quite vocal about politics on social media. The “Project Runway” host, however, reacted to a Twitter user who asked her to talk about politics with her family earlier this year, following the results of the 2020 presidential election in January. “I’ve tried,” Karlie replied at the time.

The model also made her political beliefs known ahead of election in November 2020. She took to her Instagram page to share a photo of herself on Instagram, wearing a face mask featuring a “Biden-Harris” logo, while she held her mail-in ballot.

In the interview, the 29-year-old beauty also talked about loving her post-baby body. “I love my body in a way that I never have,” she said. “I never imagined that I would have a career [in which] my body would be so intertwined with my success or failure. That’s something that I really don’t like about being a model, but — it’s part of the job.”

Karlie, who gave birth to her and Joshua’s first child Levi earlier this year, added, “I think it’s really unfortunate that there are still such narrow kinds of ideas [like] you need to be able to fit a sample size. I’m not going to change who I am to fit that.”

She also revealed that fellow model moms, such as Ashley Graham, Emily Ratajkowski and Irina Shayk, helped her a lot. “The mom group friendship thing — I was always like, Yeah, that’s cute but that’s not going to be me,” she explained. “[Now] I don’t make a move without asking my mom friends.”