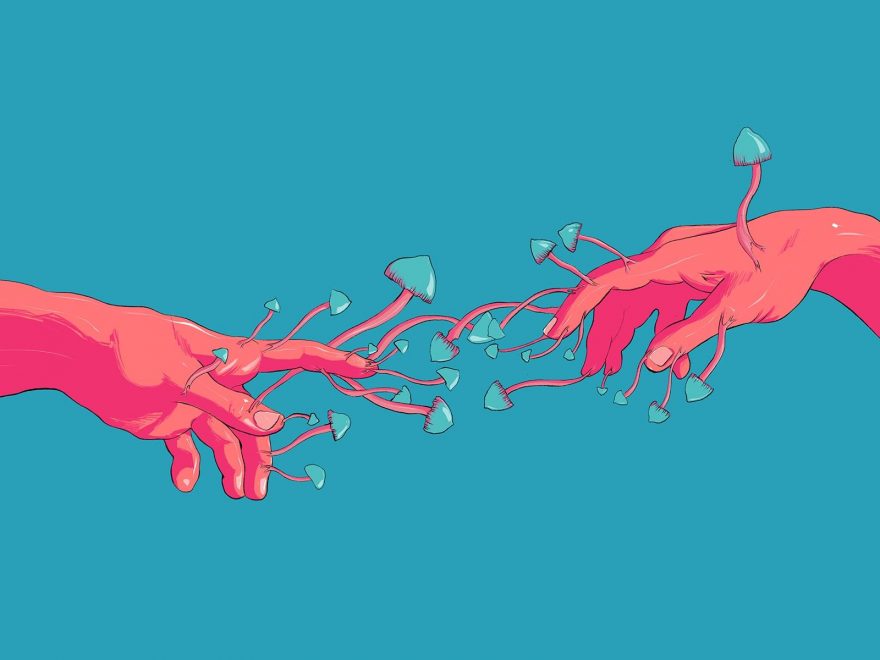 A psychedelic trip can be among the most sacred experiences of a person’s life. And yet, that impulse to take a psychedelic for a spiritual reason is often overlooked as a reason to lift prohibition for psychedelic substances.

Oftentimes, cannabis legalization is seen as a model for psychedelics. With cannabis, we are seeing the plant being legalized piecemeal, usually for medical and then recreational use. Indeed, we’ve already begun to see two main routes to ending psychedelic prohibition: medicalization and decriminalization. But what this binary paradigm of medicalization versus decriminalization conceals is a third way of using psychedelics: getting legal sanction for the spiritual or religious use of psychedelic substances, which, among a variety of traditions, are deemed to be sacred tools used in holy rituals.

Could Psilocybin Be as Effective as Antidepressants?

The True Story Behind 'Cocaine Bear'

No, we’re not talking about newly formed weed or psilocybin “churches” that are built around using controlled substances under religious protection; but rather, long-established religions that include the use of psychedelics in contemporary practice. In a small but fast growing movement, members of Abrahamic faiths are incorporating entheogens — substances that occasion spiritual experiences — into their own practices, and referencing Biblical traditions as precedent for doing so.

Take, for instance, the quickly growing meetup group called Faith+Delics, run by Plant Medicine Law Group founding partner Adriana Kertzer, which has grown to dozens of members in less than half a year, drawing rabbis, priests, scholars, and practitioners of Judaism, Islam, and Christianity. Then there’s the Jewish Entheogenic Society on Facebook, boasting close to 1,000 members, not to mention the upcoming Jewish Psychedelic Summit, where dozens of speakers are slated to present on ancient psychedelic ritual and religious frameworks, Jewish shamanism, and contemporary practices. (One of these organizers is Madison Margolin, an author of this article.)

For more than half the past decade, Madison, who is Jewish, has observed and participated in prayer circles and Sabbath rituals involving magic mushrooms, ayahuasca, MDMA, cannabis, and other entheogens. As one underground guide from a Hasidic background who serves plant medicine within the Jewish community puts it, “these plants are teachers and healers, helping our people heal from traumas that they’ve been going through for thousands of years, as a minority people in Europe and other lands, and helping us embrace our true nature — what we’re born from, and our roots.” By working with plant medicine like ayahuasca, many in the community, he says, have transformed their relationships with their spouses, employees, God, religion, and themselves. Rituals involving these plants, he adds, “can be practiced in a non-pagan way, but integrated into the sacred of all religions.”

And it’s not all New Age spiritual approaches being applied to established religion, either: Archaeological evidence shows the presence of cannabis residue at holy biblical sites in the ancient city of Tel Arad in Israel, while scholarship also points to the use of acacia wood (containing DMT) and a cocktail of other entheogens used in Israelite incense rituals, as well as kaneh-bosm (cannabis) in Christ’s holy anointing oil.

But the question remains: For those who incorporate psychedelics into their contemporary practice of a well-established religion, is there legal protection to do so? And if not, could pursuing religious protection be yet another route to ending prohibition?

To start, the First Amendment offers protection for religious observation and practice. “Religious freedom is regarded as the first freedom, and is the first thing in the First Amendment,” explains Gary Smith, general counsel to the Peyote Way Church of God and founding partner of Guidant Law Firm, which handles cannabis and plant medicine cases. Congress cannot establish or qualify any particular religion. “From that perspective, no one needs to go to the government to get permission for the religious use of any substance [as] there is no department of religion,” he adds. “That being said, you need to have the entheogen at the heart of your religious observation. It can’t be merely incidental, but rather a bonafide sacrament.”

Take, for instance, the Tel Arad archaeological dig, where cannabis and frankincense were found in an altar at the entrance to the “Holy of Holies” of a Judahite Shrine. “Is that enough to make the argument that Judaism in its modern expression should include cannabis? Maybe,” Smith says. “If you can prove that there’s historical precedent, I think you have a historical argument. But absent that, you’d need people to come together in some form of Jewish congregation in good faith with a bona fide argument that cannabis is a central sacrament to their iteration of worship and then under RFRA, it would be the federal government’s burden to prove it has a compelling interest to regulate on top of that practice.” But a connection between practitioners of an old-world religion and an entheogen can be established with or without historicity, Smith adds; most of all, proving that connection would depend upon those persons coming together in a “bonafide religious context (and all that that means).”

The Religious Freedom Restoration Act (RFRA) prohibits the federal government “from substantially burdening a person’s exercise of religion, even if the burden results from a rule of general applicability.” In other words, even if a substance like ayahuasca is federally illegal, groups using it for “sincere” religious purposes may be able to seek out protection under RFRA. But proving the sincerity of the religious practice is another feat altogether. The catch-22 is that for anyone pursuing this religious freedom, until a court rules that the practice is compliant with RFRA, there will be an omnipresent potential for discrimiation, or even prosecution.

Truth be told, whether a psychedelic substance can legally be used in religious ceremony is unsettled law — with the exception of religious exemptions offered to the Native American Church (NAC) to use peyote, and the Uniao do Vegetal (UDV) and Santo Daime churches to use ayahuasca.

“If I were speculating about whether or not a currently established religion could use a controlled substance, I would consider the fact that UDV and Santo Daime are syncretic religions, merging elements of other religions together,” says Ismail Ali, policy and advocacy counsel at the Multidisciplinary Association for Psychedelic Studies (MAPS), who also advises churches in this area of the law.

UDV and Santo Daime have Christian elements, although they are ayahuasca churches, while the NAC similarly is based to some extent on a church, Ali explains. “They take elements of a majority religion and apply it to a minority religion,” he says. “So looking at that, I think it does make it in some ways more plausible that a community using entheogenic substances that is basing off a currently established religion might be more likely to get an exemption.”

But it’s not so simple as basing an entheogenic practice off an already well-established religion. Members of said religion might need rulings from religious leaders and to show some level of established practice and traditions using entheogens, Ali says.

“It’s like you’re creating a different sect [of an established religion],” explains Serena Wu, founding partner at Plant Medicine Law Group. “It’s a difficult situation here: There has to be something unique about this particular religious practice, that is different from traditional Jewish [or Christain, Muslim, etc.] practice.” But then the question is, why would one incorporate entheogens into their religious practice if there are folks practicing the same religion who don’t feel the need to do so? If it’s about more than just getting around the Controlled Substances Act (CSA), Wu explains, the individual would need to articulate how the use of the entheogen applies to their religious practice in a central way. “A court will look to see whether you are just now coming up with this idea, like some weed churches, and they will start to question if you have a ‘sincerely held belief.’”

Short of expanding RFRA protections or changing the scheduling of certain entheogens, a religious group may use RFRA as a defense in the case of a criminal prosecution, for example, as a result of sacraments being seized by the DEA. “There are also other offensive litigation mechanisms, like filing for declaratory or injunctive relief to get the court to say what your rights are and possibly issue an order to restrain the federal government from violating your rights,” Wu says. These types of complaints were filed in the UDV and Santo Daime cases. Currently, the Church of the Eagle and Condor, in collaboration with Chacruna, are using a novel strategy, she explains, in regard to cases in which ayahuasca was seized by the Customs and Border Patrol at the border. The Church will, among other things, file FOIA requests to figure out what happened to the seized ayahuasca and establish a legal process to return the sacraments to the churches.

Indeed, the DEA is yet another hurdle religious groups may have to navigate in efforts to gain legal protection. The DEA’s process of getting exemption from the CSA is fraught, with many attorneys holding that the agency isn’t qualified to be involved in this process, at all, of deciding what’s a religion and what’s not. “The core thing to know is that in order to apply [to the DEA for exemption] you have to say that your use of the substance is necessary for your practice, with necessary being the keyword,” Ali says. “And yet you also have to stop using it while you’re waiting for the DEA to respond. The paradox there is quite apparent.” If the substance is so necessary, then an observant religious group wouldn’t be able to stop to wait for permission because in suspending use, they’d be showing that the entheogen isn’t so necessary after all. Some attorneys even argue this process is unconstitutional because it would require a group or individual to self-disclose illegal activity, without guaranteeing an outcome — thereby putting people even more at risk than less.

In general, with administrative procedures in law, there’s an exhaustion requirement, Ali explains, showing that all available remedies have been tried before judicial solutions are available. So if there is an available remedy such as the DEA process, if it’s legitimate, then the courts won’t necessarily see the case unless the group gets denied through that process first. What frustrates the situation, however, is when the DEA simply does not respond to the request — what some have experienced as all too common a strategy of the agency — thereby keeping a group from taking further action without an official rejection.

The bottom line, however, is that “necessity of religion is stronger than the goals of the CSA,” says Ali. But in the case of an old-world religion, members might first have to prove why an entheogen is so central the practice now, when such rituals have been dormant for the past few thousand years.

With evidence mounting for the incorporation of psychedelics into contemporary Abrahamic religious practice, it may become easier to make a case that these substances are indeed central and necessary: Indeed, in Madison’s seven-plus years of reporting on the overlap of religion and psychedelics, we’ve observed that for those who otherwise would not be practicing religion altogether — including secular-raised folks lacking religious insipration, as well as those who’ve fled from more hardcore orthodox backgrounds — psychedeilc spirituality, through ayahuasca, LSD, mushrooms, and other entheogens used during holidays and rituals, has been the only means by which they’ve been able to meaningfully practice the religion. “Many people have resistance to their religion,” the underground plant medicine guide says. “But I feel that the medicine is incredibly healing, helping us shed our ancestral baggage, get over these humps, and connect to the Creator.”