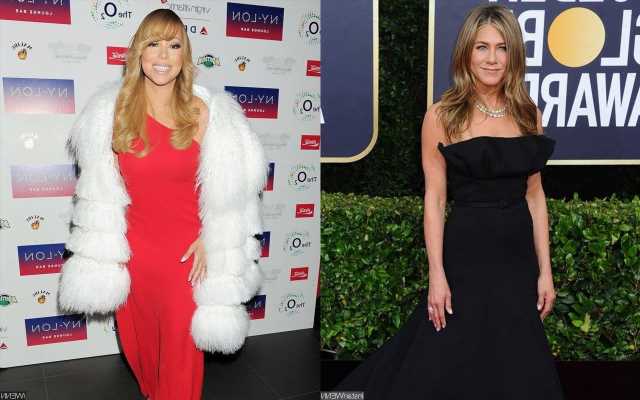 After the ‘All I Want For Christmas Is You’ hitmaker shares a throwback photo in which she tried to recreate the iconic character’s hairstyle, the Rachel Green depicter says that she ‘loves it.’

AceShowbiz –Jennifer Aniston has reacted to Mariah Carey‘s “sad attempt” at recreating Rachel Green’s famous hairdo when she starred on “Friends“. Giving the “All I Want For Christmas Is You” hitmaker stamp of approval, the “We’re the Millers” actress exclaimed that she loved the look.

The 51-year-old singer shared her throwback photo on her Instagram on Friday, May 28. In the snap, the “We Belong Together” singer can be seen performing on stage with wavy hair styled in a half-ponytail, a signature look of the character. In the caption, Mariah wrote, “#FBF A sad attempt at the Rachel hairdo,” along with a laughing with tears emoji and a hashtag that read, “#friends” at the end.

Though the “Just Go with It” actress praised Mariah on her Rachel-inspired hair makeover, the actress once revealed that she didn’t like the haircut on herself. In an interview with Glamour back in 2015, she spilled, “I was not a fan of the ‘Rachel.’ That was kind of cringe-y for me.”

“Looking back – honestly, even during that time – I couldn’t do it on my own,” Jennifer admitted. “I needed [my hairstylist] [Chris McMillan] attached to my hip. Left to my own devices, I am not skilled with a hairbrush and blow-dryer.”

At the InStyle Awards 2018, Jennifer also claimed that she had trouble styling the Rachel cut. “I got that haircut, that was like, ‘Wow this is amazing,’ and then I was totally left with this frizzy mop on my head, because I had no idea how to do what he did,” she said. She then jokingly added, “Nobody seems to know how to do what Chris does. And I figured out that’s called creating job security.”

However, Jennifer’s voluminous side-swept bang and high ponytail cut became known as “The Rachel” at the time when the second season of the series reached its peak. The hairstyle also went on to become a popular hairdo that celebrities and everyday women would request in the late 90s, per Biography.com.