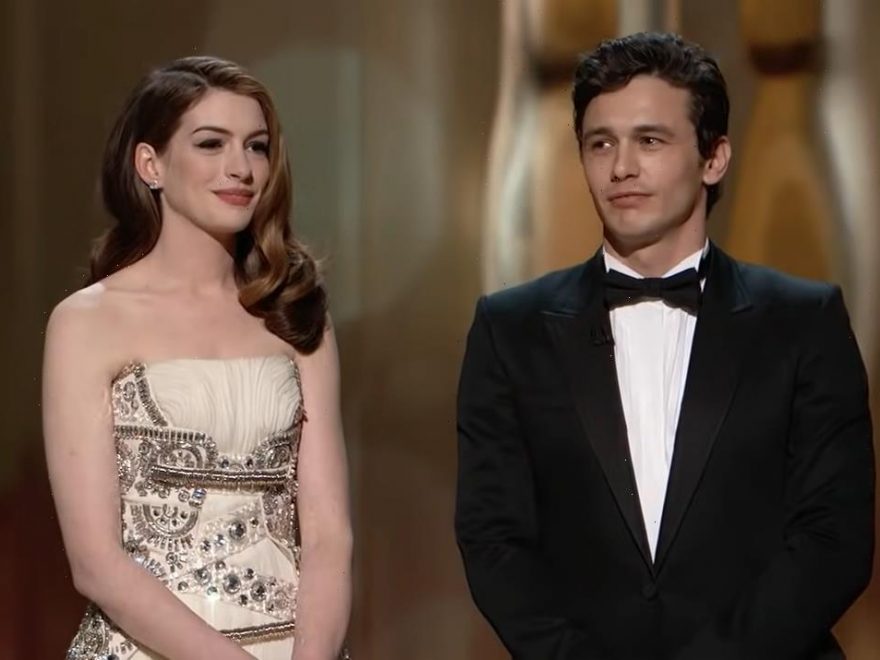 It’s largely considered to be the worst Oscars ceremony of all time. And ten years later folks are spilling the tea on how much worse it was behind the scenes!

We are of course talking about the 83rd Annual Academy Awards in 2011, hosted by — for reasons we have never figured out — James Franco and Anne Hathaway. Not only are neither of the stars emcees — usually they get a comedian or a talk show host for the gig — they also have SUCH clashing energies!

“It was like the world’s most uncomfortable blind date between the cool rocker stoner kid and the adorable theater camp cheerleader.”

Wild is one of a number of writers from the ceremony who opened up about the debacle in an oral history on The Ringer on Wednesday.

“A host’s primary job is to make the audience feel comfortable and the audience at home feel welcome at the party.”

And these two trying to work together only made everyone way more uncomfortable.

“Once the audience felt the hosts’ discomfort, they got quiet.”

How did this even happen??

The whole idea behind the two stars was to try to inject some youth into the show. For that same reason the show brought in fresh writers Jordan Rubin, who had written on multiple MTV Movie Awards, and Megan Amram, a talented standup who was only 22 years old (and who would years later go on to be a co-executive producer on The Good Place). Amram jokes now about the push for a younger, hipper Oscars:

“I thought that it sounded at the time like someone had run pop culture through an algorithm and spit out this thing on paper that sounded like it would appeal to the youth. But in practice, it was very random.”

The writers tried to come up with bits that somehow worked for both hosts, but with his sarcastic, indie realness and her high-energy Broadway pizzazz, it was just all awkward all the time. Amram recalled:

“A lot of stuff that made it into the show was written a few days beforehand. We wrote all these jokes, but I don’t think we ever landed on a tone or a cohesive feeling of what the show would be.”

Even their schedules clashed! Rubin says that during the months of prep, it was difficult to get the two together:

“Anne made herself readily available. I went to her house and worked on the script and she was on a bunch of conference calls and responding to emails and was a great collaborator.”

James, on the other hand, was busy taking a gazillion classes at both Yale AND NYU — while at the same time somehow teaching in El Lay. Oh, and shooting movies. Rubin remembers:

“He always seemed to be on a flight and it was very hard for me to get a hold of him. That was a red flag.”

Once they got together for rehearsals, the difference was even worse than it seemed on paper. Rubin recalls:

“She showed up ready to play and committed 110 percent. And he was a great guy but often looked like he had just woken up from a nap. It’s almost like you’re showing up to a tennis court and one person decided that they were going to play in the U.S. Open and the other wanted to play in jeans and just kind of hit a few balls.”

Rubin does want to put one rumor to bed, making it clear Franco was not on drugs — that’s just who he is:

“He was not stoned. I don’t even think he drinks.”

Both Franco and Hathaway have discussed, however briefly, the ceremony in the past, and their recollections definitely reflect their differences to this day. Anne remembers trying too hard, saying in a 2012 The Hollywood Reporter roundtable:

“I realized afterwards, I played to the house; it’s a 3,500-seat theater, so I was just shooting energy to the back of it and it was like a party! It was great! And I think it looked slightly manic and ‘hyper-cheerleadery’ onscreen.”

Franco, on the other hand, told New York Magazine in 2016 he had no interest in trying too hard:

“I’m going to do what they ask me to and do it as well as I can, but I don’t need this to be the best Oscars ever. I’m not getting anything out of that. In the best-case scenario, even if I killed it, it’s not going to help my career, because that’s not what it’s based on. It was an experiment.”

The friction between the two personalities was palpable, and for anyone thinking that was supposed to be some grand joke… no, it was all too real.

Wild recalls the moment things got started getting tense during rehearsals:

“Again, this is a memory, but was like ‘Maybe you should try that,’ and he was like, ‘Don’t tell me how to be funny.’”

Oof. Wild says for one moment during dress, he thought they were finally getting along when he saw the monitor and Franco was smiling at his co-host:

“I thought ‘Oh boy, they’ve finally broken through and he’s looking at her!’”

But then the camera panned, and he realized it wasn’t to be:

“Anne had gone to her dressing room for a minute. James was smiling at her stand-in.”

Speaking of dress, probably the most cringeworthy moment (apart from Franco having to continue to host the awards after NOT WINNING the one he was nominated for — seriously, they should NEVER have a nominee host) was when Franco walked out in drag as Marilyn Monroe.

Vilanch reveals that originated with an idea from Franco himself, who wanted to perform a duet in drag with Cher. When they couldn’t get her, they came up with something that really felt like only half an idea. And it got lambasted for many reasons. Vilanch explains:

“He got a lot of flack from people who feel drag is one of the lower art forms, not worthy of exposure on the Oscar show unless you’re nominated for it. I regret encouraging him to do it. There was no Cher for him to play with, but he had gotten the drag bug.”

And remember, that’s one of the bits that made it to the show! There were also musical numbers and a nude sketch that got canned as no one — especially the hosts — could ever agree about what the heck that ceremony was supposed to be.

You can read the entire story — and we highly recommend you do — HERE!