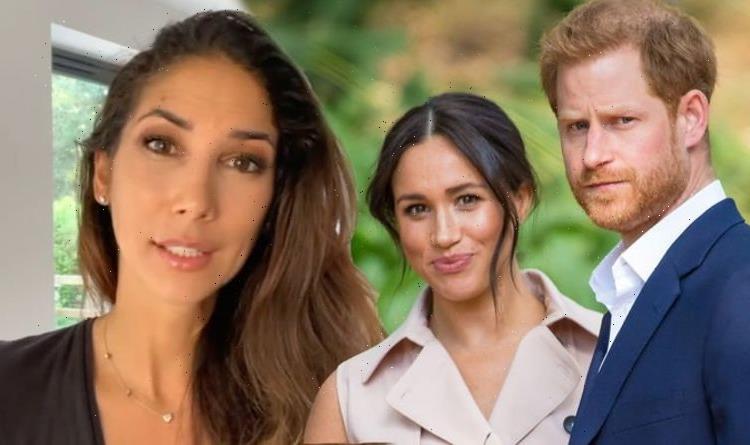 Prince Harry revealed last month that he is planning to release a tell-all memoir following his decision to step down as a senior working royal. In January 2020, the Duke of Sussex and his wife Meghan Markle made the controversial decision to resign — a move that hadn’t been seen since 1936.

The couple, who now resides in Montecito, California, announced their decision with the hopes of living a more financially independent and private lifestyle.

However, since their shock announcement that rocked the House of Windsor, Meghan, 40, and Harry, 36, have seemingly embraced the celebrity lifestyle, participating in the likes of James Corden’s Carpool Karaoke and announcing that they would be creating television programmes and podcasts.

This decision has since rattled former Page 3 star, Leilani Dowding, 41, who has accused the Duke of Sussex of appearing to profit from his royal status.

Speaking exclusively to Express.co.uk, the star has shared her brutal thoughts about the Sussexes.

Following Harry’s announcement, there had been speculation that he was set to release four memoirs, including one after the death of Her Majesty The Queen, a claim which he has denied.

Leilani however is still rattled by the idea that such a senior member of the family would be telling their story so publicly.

Discussing Harry’s decision to release his memoir as the “man he is today” and not as the “prince he was born”, Leilani fumed: “Tell-all memoirs are not private, it’s the opposite of private.”

She went on to claim: “Telling your memoirs is the absolute opposite of what they said they wanted.”

The former Royal Holloway student continued: “So quite honestly, I just don’t believe they ever wanted privacy.

“They wanted to be a part of the Royal Family, not the privacy, but so that they could sell everything and that’s my opinion.”

“It’s horrific and I can’t even think of somebody thinking that through, it’s really gross behaviour and completely un-royal — the complete opposite of royal.”

Discussing the potential contents of Harry’s memoir, Leilani went on to say: “I’ll be interested to see if it’s really about the interesting aspects of his life, the old Harry we love, his naughty behaviour, the chicks in Vegas, him dressing up for fancy dress parties.”

She questioned: “Or, whether he will be like, ‘Oh poor me, I’m a victim of a privileged lifestyle’.”

The equine enthusiast claimed: “There’s a lot of people out there who have had hard lives and have come from poor families, so it’s kind of hard to feel that bad when you’ve come from a really privileged family and has everything you’ve ever wanted.”

Following speculation that Harry would release four memoirs, a spokesperson for the Sussexes said that these were “false media reports” and he only plans to release one.

The Duke of Sussex says his memoir will be “accurate and wholly truthful” as part of his deal with publishing firm Penguin Random House, which is worth an estimated £29 million.

Penguin Random House said for the “very first time” Harry will put on record the “the definitive account of the experiences, adventures, losses, and life lessons that have helped shape him”.

In a statement, Harry explained: “I’m writing this not as the prince I was born but as the man, I have become.

“I’m deeply grateful for the opportunity to share what I’ve learned over the course of my life so far and excited for people to read a firsthand account of my life that’s accurate and wholly truthful.”